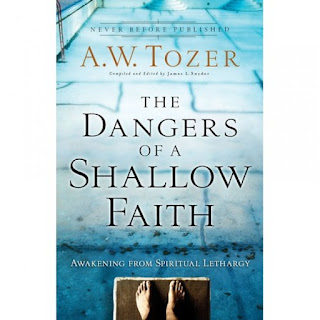 I am continuing along with the top ten books that I read in 2012.  I purchased this book and several others in this series because of my past familiarity with the writings of A. W. Tozer.  His books are geared toward personal consecration, worship, and with a deep opposition to lukewarmness.

The book itself is the work of A. W. Tozer but James Snyder was instrumental in compiling some of Tozer’s work after his death.  This book comes from a series of messages that Tozer preached in response to critical developments that he saw within the church.  Perhaps the primary theme of this book is the idea that the world is too much with the church.  He noted that the church is so intertwined with the world that instead of appearing as two, they really are one.

Furthermore, Tozer refused to accept an entertainment mentality when it came to worship and that church was simply a place that one turned to in an effort to escape boredom.  This book has the somewhat shrill but necessary cry of the prophet for our generation.  He went on the write that a worldly church was an oxymoron and completely anathema to God.

It is divided up into three sections, The Dangers Facing the Evangelical Church, The Challenges Facing the Evangelical Church, and The Path to Overcoming These Challenges.  Some of the chapters are worthy stimulants for those are who ministers to develop into useful preaching material.  I must confess that over the years the Tozer books have caused me to think much deeper about my own walk and the necessity of commitment.  To inspire you to read this book, I have listed some of his chapter titles:

The chapter that seemed to stand out to me the most is chapter 6, The Irrepressible Law of Consequence.  Tozer wrote that hell is full of fools and heaven is full of wise men and that pattern will hold true through eternity.  It is crucial that wise choices be made about whom we allow to influence us.  He wrote that no one ever longs for death but that small choices are made that leads them down that path.  Cities do not choose to rot and die they just make concessions that lead them down the path of their demise.  When people who are in the church make the wrong choice it is usually because of spiritual apathy that has rendered their soul useless in the fight of faith.

This book is straight-forward and direct but I believe you will be a better person having read it.