Showing posts from March, 2006
Show all 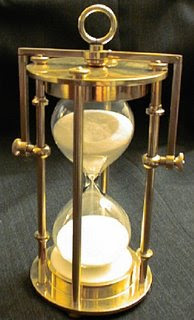 To the uninitiated who are reading this blog, you are about to read a Barnabas Letter. This is Letter # 48. I begin writing these in March 1995 with nothing more than an effort to be an encouragment to those w ho were serving in some capacity of helping others in the Church. May you gain something from your time with this thought. My hope is that you will become a greater servant for the Lord. Ma rch 28, 2006 Dear Servant of the Lord, A good friend of mine, Paul Jacks, told me some time ago about going to a Men’s Retreat in Texas and hearing the venerable Crawford Coon teach. He taught three sessions on various matters to me n who walking through this world and trying to remain unspotted from it. He told me that at some point during these sessions that Bro. Coon shared with them a letter that he had written to himself when he was a much younger man. The whole emphasis of this letter was to remind him of what it was like to be young and what was going
1 comment
Read more 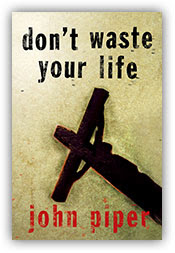 If you are much of a reader, you will discover that there are two types of authors. Those who change to write and those who write to change. Those who change to write are generally writers of fiction who keep up with the trends of what readers want and they adapt their books to fit into that genre. Then there is that grand category of writers who write to change. Charles Dickens' novels is such a writer who writes to change. His stories do much more than just tell a story. They get into the mind of the characters and they play into the plot. The reader is much more than just a spectator of the story. He has the ability, through the story, to feel the weight of choices and the dilemmas that each character has to struggle with. To really get what I am trying to convey, one would probably find it a good exercise to read Oliver Twist and pace the path with Fagan, one of Dicken's most evil characters in all of his books. A. J. Cronin and Lloyd C. Douglas are writers from
Post a Comment
Read more

Houston, We Have A Problem Me, The SBC, and IMB About a year ago, a small blip hit my radar screen in the "blogdom" as it is called. It is quite a unique place. It has helped me to see the world from another angle in the last several months. Now that blip has turned into a huge blip. The blip came across the screen when I started picking up on some trends in Baptist blog circles where there was much discuss ion about tongues and spiritual gifts. Real spiritual gifts, not flower arranging, cooking potluck dinners, or vacuum cleaner maintenance, but real stuff, like the 1 Corinthians 12-14 things. Soon thereafter, Tim Kelley, a friend of mine sent me the CD's from the Louisiana summer fest and there was one particular message that caused the blip to get bigger. T. F. Tenney preached/taught a message about being an Apostolic in this age and how that many non-Spirit filled (and even some SF churches) churches are filled with apathy, indifference, and other things that are literally choking th
2 comments
Read more 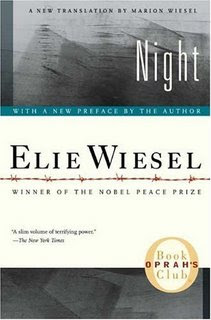 A friend of mine, Calvin Jean, a few weeks ago told me that I had to read a book that he was reading. He told me that his girls, who were seniors in high school, were having to do term papers on books that they were able to select from a list. They happened to pick Night by Elie Weisel. Their choice was what brought this very troubling story into my life. Calvin told me that he just picked up the book when one of his daughters had laid it down and was immediately drawn into the story. Little did I realize what an impact that this book would have on my comfortable little world. In fact, I was so troubled by this story that it would weave it's way into my preaching and into the lives of those to whom I preach to. There are some in the congregation who went and either checked it out at the library or bought it and read it. I confess that I made both of my boys, Justin and Nathan, read this book because it gave them some insight into the terror that ruined young Elie'
Post a Comment
Read more 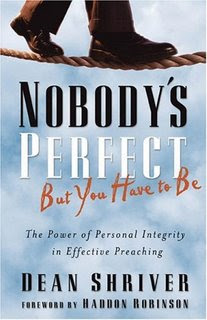 I have just finished reading an excellent book for those who are involved in ministry. Whether it is a pulpit ministry, youth ministry, Sunday School, or anything that falls in between, this book is a very helpful book. Another useful thing about this book is that it is a 2 1/2 to 3 hour book that will not hang you up for days. Dean Shriver has written Nobody's Perfect But You Have to Be . The subtitle is "The Power of Personal Integrity in Effective Preaching." It packs a punch and forces anyone who is in public ministry to really take a look at their personal life. This excerpt in the introduction is the reason that I purchased this book: The worship service was about to begin when I saw her. I greeted her with curiosity. I knew that she was a fully committed member of a sister church in our area. During our brief exchange, she quietly said, "I simply cannot listen to that man preach." That man was her pastor of almost two years. Why, on that morn
Post a Comment
Read more

The Best of the Rest - J. T. Pugh - The Making of a Champion

Some of you have followed along with the "Top Ten" sermons that I have heard in my life. It has been an interesting process but there were some that were very notable that I did not include in the Top Ten. So in the next few days (maybe weeks) I am going to give you what I am calling The Best of the Rest . I previously mentioned this seminar in a previous post and the impact of J. T. Pugh's ministry. I am including the notes that I furiously scribbled while Bro. Pugh was preaching. I did notice something with my note-taking. I noticed that when a Scripture reference was mentioned in "preaching" that I would generally not make a note of it (very bad habit) but when someone was "teaching" then I would write down a vast number of Scripture references. Also, I noticed that when you try to decipher something that you have written in the past, that vagueness is a poor habit. The vagueness of the notes will leave you in the dark and it becomes a hug
3 comments
Read more
More posts
Visit profile