Showing posts from June, 2006
Show all

Summer is here! School is out and today actually officially begins summer. However, the hot weather has already arrived and it has been here for a month or so. Now begin those so-called “lazy days of summer.” One of the big deals when I was growing up was always getting involved in the summer reading program at our local library. I read through the “Black Stallion” series, through the “old” Hardy Boys series (not the Case-files), and I read numerous biographies and sports stories. Reading stretched my mind and allowed me to go to far places with simply the turn of the page. It is sad to see that this generation is becoming so very increasingly separated from books. Another major event for the summer was going over to my Granny and Papa’s house in Andalusia , Alabama . They lived quite a ways out in the country and without any sort of central cooling or air conditioner. I can remember at night trying to sleep with the windows up and hear
4 comments
Read more 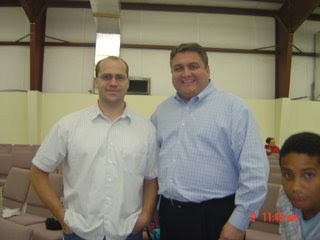 Live Blogging from Pike Road Alabama District UPC Senior Camp Day Five -- Friday, June 09, 2006 The day started late, instead of early as the other mornings have. . . which was a change. The Pizza Party has wiped everyone out since we did not get in the bed until around 0100 last night. Some of the guys who helped get the Pizza Party area back in order did not get into bed until around 0215. So needless to say, it nearly took a stick of dynamite to get this bunch up and going this morning. But one of the good things is that Friday morning breakfast has garnered a long standing tradition around Pike Road for a long time and that is Bro. R oger Lewis’ pancakes (Bro. Lewis is our District Superintendent). So all of the sleepyheads were able to eat some very good pancakes. Also because it was so late, when my phone alarm went off at 0545 for the morning bike ride, I promptly turned it off and went back to sleep. I may get the opportunity to ri
8 comments
Read more 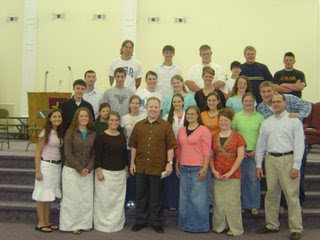 Live Blogging from Pike Road Alabama District UPC Senior Camp Day Four -- Thursday, June 08, 2006 The day started early. . . real early. . . like 0200. Again, we had some folks talking in their sleep. Again, it aroused several folks who all witnessed the fact. Nathan Harrelson was holding “court” at 0200. After getting him settled down, we went on back to bed. I am unsure of what was going on in Dorm D (the girls dorm) but apparently nothing because they fared well in the morning assembly. The actual day started at 0545 with Bro. Charlie, Bro. Neal, and me. Bro. Charlie walked the grounds and Bro. Neal and I took off for a early morning ride. At the end of the 17 ½ mile ride we had encountered no dogs and the only excitement that we ran across was some guys trying to herd up a large group of cows. The cowboys were shouting and the cows were mooing and we zipped by without getting a real clear look at exactly what all was
1 comment
Read more 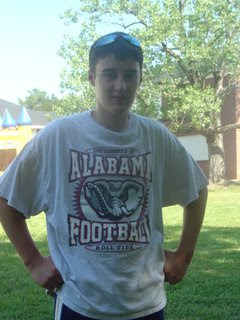 Live Blogging from Pike Road Alabama District UPC Senior Camp Day Three -- Wednesday, June 07, 2006 For all of the folks who were worried about the girls of Dorm D, they have redeemed themselves. It appears that they all went to sleep last night without any pending disasters, at least none have come to light as of this time. So because of that, this morning, the Dothan girls of Dorm D were allowed to leave the morning assembly and go to breakfast first. Please note that I wanted to post a lot more pictures on the blog from yesterday but was unable to do so because of the internet connection. Hopefully, I can find a good remedy for that for this post. For those who are wondering, what I am doing is to leave the Campground just before Midnight Madness starts and sit in the parking lot of Panera Bread and use their free connection. The problem with this is that the restaurant is closed and I do not have an alternat
3 comments
Read more 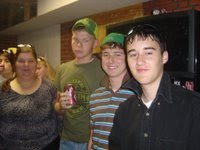 Live Blogging from Pike Road Alabama District UPC Senior Camp Day Two -- Tuesday, June 06, 2006 Wow!!! That is what describes the beginning of this second day at the ol’ Campground. The day actually started deep in the heart of the night. At 3:24 AM in Dorm B (I know I looked at my clock on my cell phone), I was awakened by several muffled laughs and giggles coming from the other side of the room. Upon investigation with a trusty Mag lite, I discovered that several of the laughs were from Robbie, Ron, and Justin who heard Michael Joyner talking in his sleep. But it also appears that some concurrently in the building at the same time that Dorm D, where our girls were staying, that a much greater mayhem was occurring. It appears from several reports that the Dothan girls and the Eva girls were involved in near “high crimes and treason.” Anyway, whatever it was that happened caused them to have to eat breakfast last. Upon fu
Post a Comment
Read more 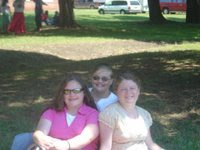 Day One -- Monday, June 05, 2006 I have been exiled for a week and it is not in Siberia but rather in Montgomery , Alabama at the Alabama District United Pentecostal Church District Headquarters. We started this morning at 0630 and rolled out of Dothan with about 25 Senior Campers and four staffers along with our district Youth President. Our District Youth President is also our Youth Pastor (Neal Williams) and he arrived last night to get things ready for camp to start today. We managed to clear the runway in Dothan at 0725 and arrived for registration by 0940. The rush from the campers was to get the bunk of their choice. It is always sort of amazing how our priorities have suddenly changed with the arrival of summer Youth Camp. After a brief orientation with the principal Pastor Perry Wells of Vincent , AL we were well on our way to starting the camp off right. No shaving cream episodes are allowed, no water guns, n
2 comments
Read more
More posts
Visit profile