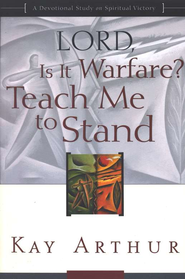 One of the things that this study guide, Lord, Is It Warfare? works toward is getting our minds to think in a biblical direction about spiritual warfare.  One of the benefits of this is that it will move your mind to areas of Scripture and characters that exemplify the principles.  Day 4 and Day 5 are both relatively short although is some more interaction with Scripture that is necessary.  By virtue of this, you make a strong connection between the events of Acts 19 and the principles that are expressed in Ephesians 6.  One thing that comes to mind is the closing out of Ephesians 5 and beginning of Ephesians 6 where Paul speaks of marriage and the family.  The reality of the matter of it all is that these too can be battlegrounds that the enemy will attempt to insert himself into.  While spiritual warfare takes place in the heavens, it is played out in a very practical setting where we live our lives.

Ephesus, because of occultic influence, was a place that was driven by fear.  The shamans, pagan priests, and others given to the influence of the “curious arts” (defined as such in Acts 19) played and preyed on the fears of the people.  This caused me to consider the aspects of America culture where that we pay money to experience fear.  However, I would cause you to think in this way with me.  If the enemy can cause fear and use themes that have ominous spiritual outcomes to be confined to a movie screen, the viewer’s compartmentalize it and believe that there is nothing to it.  What a brilliant move but very deadly move by the enemy.  Kay Arthur notes, “Films, TV, and recorded music evidence increasing control from the ‘dark side.’  Occult images fill even children’s films, cartoons, and video games.” 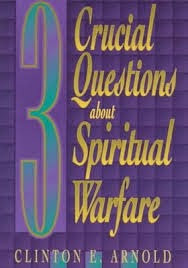 Fear is a very common concern when we approach the subject of spiritual warfare.  However, fear that causes us to hide our heads in the sand is never productive.  Because there are many who fear the dark kingdom of the enemy, they attempt to ignore the reality of spiritual warfare or dismiss it.  Those who choose to walk in fear or ignorance will not create immunity from this spiritual battle.  In fact, fear and ignorance will only make us more vulnerable to the attacks of the enemy.  The arguments against such a dark kingdom of the devil are looked upon in this manner (adapted from Three Crucial Questions about Spiritual Warfare, Clinton Arnold, pp. 24-26):

1.      The concept of spiritual warfare reflects a primitive, medieval approach to God.  Modernism has made its inroads into the church and under the guise of education and sophistication; the devil and demons have been placed in the category of Santa Claus and the Easter bunny.  This idea has a very strong leaning toward humanistic thinking.  Those who have been “enlightened” only believe the existence of the devil to be in a troubled human mind.

2.      Demons and evil spirits are not very prominent in the Bible.  This may not be a formal argument presented by detractors but there is the common idea that the Bible is a book that is for moral shaping and self-improvement.  However, any honest and serious student of Scripture would have to note that the conflict between Satan and the powers of evil is a major theme in biblical theology.

3.      Some would like to limit demonic activity to the mission fields and underdeveloped countries.  Those who have this thought believe that the demonic realm is only present in countries where the Gospel has never been preached.  However there are no Scriptural concepts that indicate this.  In fact, it seems that where the Gospel is preached that opposition is present.  Anyone who has the Spirit invested in them and has true biblical discernment would not only argue otherwise but would have the ability to point out with credible evidence that the devil is much at work in our society.

4.      Demonic activity ceased in the second century.  Those who believe this think that when the earthly ministry of Jesus and the apostles concluded that active demonic activity also ceased to exist.  Church history does not bear this out because we note that all throughout the history of the true apostolic church that there were notable attacks of false doctrine, pagan religions proliferating, and the active work of sinful, evil behavior in the world.

5.      “Warfare” is not an appropriate metaphor for those who are seeking peace.  Those who see the Bible and the Christian life as an opportunity for self-improvement and various social programs disdain the idea of being in a war.  However, this war is not fought with weapons and guns but rather with in a spiritual realm.  It is clear that men are spiritual in nature and more than just a functioning biological specimen.  The Bible calls for an awareness of spirits that fight to control the human race.

6.      Stressing spiritual warfare might lead to an unbalanced, experience-oriented theology centering on the spectacular.  This is a valid concern and one need go no further than TBN to find some of the most exotic and hokey explanations of spiritual warfare ever.  However these glib false teachers have capitalized on the uninformed mind who cannot discern clear biblical truth.  On the other hand if the approach to spiritual warfare is biblically based and has sound theology behind it, we can have great peace about spiritual warfare.

In this matter of spiritual warfare, I have to note the position that being filled with the Spirit places me in.  You can find out your place when you use the single little preposition “in.”  There are many examples of this in Ephesians where we are “in” Christ and “in” Him.  There is a certain amount of ownership that can be expressed in the life of a saint of God so that we can see that we are “owned” by virtue of our relationship with the Lord. 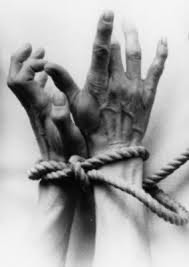 The New Testament is full of metaphors concerning the struggle of spiritual warfare and those who come into the Kingdom:


But God in His grace does not leave us without a covering.  Whenever a person receives the Holy Ghost there are several benefits that automatically come to the believer:


This battle is much bigger than any one person or any one church but it is not bigger than God.  We also must point out that the devil is not on equal footing with God and that he is overmatched and will ultimately be a defeated foe.

On a closing note, I don’t normally blog on Saturdays or Sundays so I will pick back up on Monday with this same theme.

Anonymous said…
God bless you and your work.
Marcus
10:10 PM