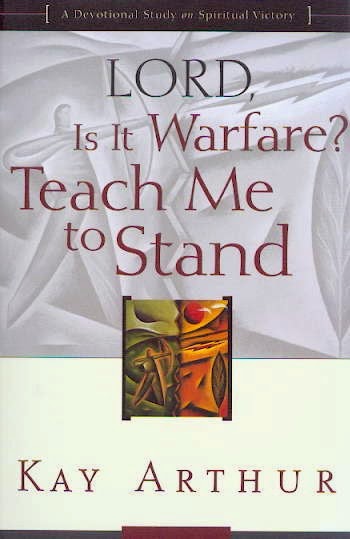 We are back in the saddle again after taking off a week from the devotional, Lord, Is It Warfare? by Kay Arthur.  I would like to reflect some on the layout of the book.  I have not blogged about Days 6 or 7 from Week 1 or 2 but there are some very valuable insights to be gained as you walk through the process of the book.  The book is designed in such a way that it walks you through various passages of Scripture and allows you to gather insight as you work in a topical manner.  I would also note that for those who are ministers or teachers of Bible study groups that I have gathered somewhat of a guess in the resources that the author uses.  Two old resources used much in generations of the past before everything came to us in electronic format was Nave’s Topical Bible and the Treasury of Scripture Knowledge.  Orville Nave works at the Bible exactly as his text suggests, in a topical manner.  The TSK is a bit different but is one of the most massive and intense cross-referencing systems of Scripture that I am personally aware of.  If there is another one that is more powerful, I am not aware of it.  Both of these tools are extremely helpful to one who is working in the Word.


Week 3 gives the chapter title, Lord, Satan’s Roaring—Need I Fear?  From here we gather the fact that the greatest spiritual battlefield is in the mind.  It is not Hollywood, Washington, or San Francisco!  The assault is literally for the control of your mind.  I would like to chase another rabbit trail of sorts in this area.  Last night after coming home from church, I started looking for something to divert me a bit to unwind from the day.  I sort of “accidentally” found an interview of Carlton Pearson that was partially an effort of his part to explain his drastic departure from the belief in hell and how that homosexuality is the new “civil” rights issue.  As I listened to Pearson, it did not take but about five minutes into the interview to realize that he has totally dismissed the Bible as the Word of God.  Furthermore it becomes clear in the interview that as he has deviated from some of the basic truth of the Bible that even more deception and error has now clouded his understanding of what God stands for and honors.  This is a pretty scary thing to realize that as one moves further into error that God allows the entanglements of deception to do its work.  Pearson, in his modern views, has totally dismissed much of what Jesus had to say and affirm about hell.  His take on the epistles of Paul has gotten so skewed that he fits the description in Romans 1, professing himself to be wise, he has become a fool.  Don’t think that any of us are immune from this kind of deception.  Now that Pearson has embraced this idea, God has allowed that strong delusion to reach a strength that it will one day damn him.  His take on holiness was very troubling and while he did not necessarily mock his roots, he did speak disparagingly of the standards of holiness that the old COGIC churches once stood for.  I would also make one other observation when he placed the ability to speak in tongues as an endorsement on what he now believes.  I have written about this before and am alarmed to find it viewed by some that speaking in tongues sort of gives you a pass on a low-level understanding of the Word and proper theology.  Nothing trumps the Word no matter how spiritual it may seem or what personality it is being touted by.  You find him speaking in ways of a sweeping globalism concerning the church.  He believes that all religions will ultimately come together in an avenue of worship, he is unwittingly being a prophet in this because John spoke of this centuries ago in the Unveiling.  What Pearson has done has lost the battle in his mind and his words clearly reflect that.  (The interview is here.) 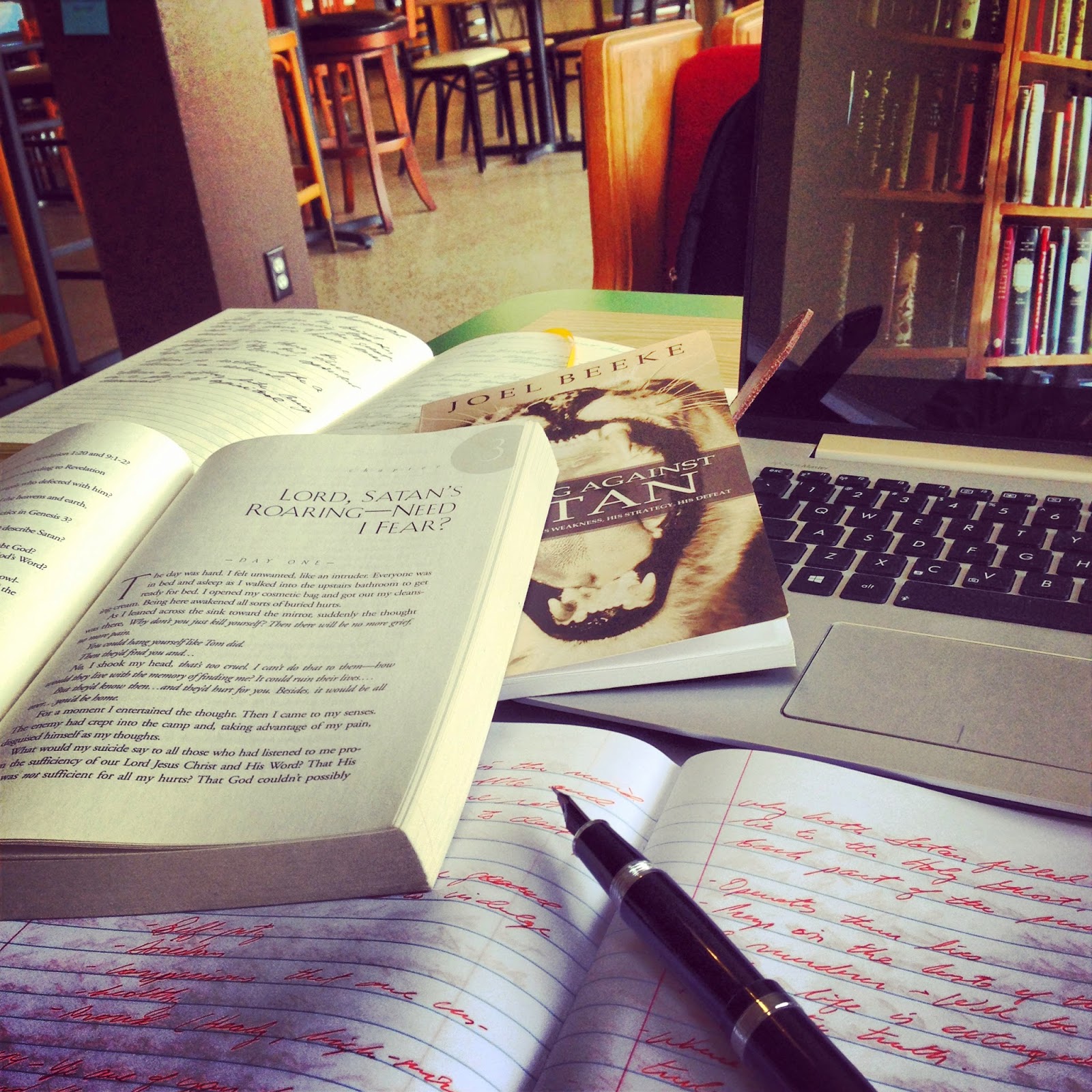 From this point on are the journal notes that I wrote down as I worked through Day 1:

-The greatest spiritual warfare is waged in the mind.  The devil will use subtle and stray thoughts in an effort to get one (or more!) to lodge in our mind.  We have the spiritual duty to bring these thoughts into captivity.  Thoughts that are not brought into captivity will destroy us.

-Some of these thoughts are ways for us to indulge the flesh:

John 8:44—Ye are of your father the devil, and the lusts of your father ye will do.  He was a murderer from the beginning, and abode not in the truth, because there is no truth in him.  When he speaketh a lie, he speaketh his own:  for he is a liar and the father of it.

Acts 5:3—But Peter said, Ananias, why hath Satan filled thine heart to lie to the Holy Ghost, and to keep back part of the price of the land?

-From these two passages we can see that the devil: 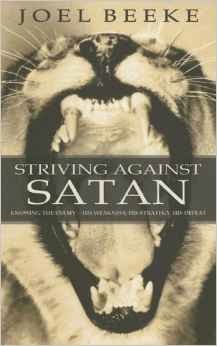 -In Joel Beeke’s book, Striving Against Satan—Knowing the Enemy—His Weakness, His Strategy,and His Defeat has the following concerning how the devil operates in the arena of being a liar:

·        Places the commands of God in a negative light.
·        He impugns God’s motive and character.
·        Claims that man can be like God.
·        He makes sin look good.  (NOTE:  I have recently revisited some of the great classics in literature.  One of the things that made some of these books so powerful was the plots of the books developed the theme that sin can look good initially but there is always a turn-about that takes place.  Leo Tolstoy does this masterfully in The Death of Ivan Ilyich.  Also Fyodor Dostoevsky’s Crime and Punishment is another book that does a fantastic job of describing a man who tries to cover his sin.)

-These thoughts come from the outside in.  It is like Christian and Faithful walking through the town of Vanity Fair.  The voices the Bunyan created come from many directions.  The vast cacophony of voices do their best to be heard.  The enemy knows that all it takes is for one of them to lodge home in the mind.

-The truth that is found in John 8:44 can help me in the following way:

·        Being aware the devil can use people around me to accomplish his purpose.
·        These people used by the enemy around us are often nothing more than pawns in a very high-stake and eternal game.
·        This places a high premium on me being very discerning is areas of associations and fellowship.
·        Religious arenas can be a high-impact area for the devil to work his charms.  (Remember Jannes and Jambres!)
·        Surrounding this passage, Jesus had some very negative things to say to the Pharisees about their lineage.  Jesus confronted them with the fact that Abraham wasn’t nearly the father they claimed because they were neck deep in religiosity and sought to kill Jesus.  I am not one who necessarily holds to the idea of generational curses but I do believe the influence of previous generations for both good and bad.  There is much to be said for us living beyond our own generation so that we can impact our children in a positive, spiritual manner.
·        He is a destroyer and wants to eradicate life of any form.  His highest desire is to destroy any kind of spiritual life.  He wants to kill it in our individual lives and also from the standpoint of the church.
·        He hates truth.  Therefore if he hates truth, then I should take every opportunity to let this truth settle deeply into my own heart!
·        When can I tell the devil is lying?  When he is talking!