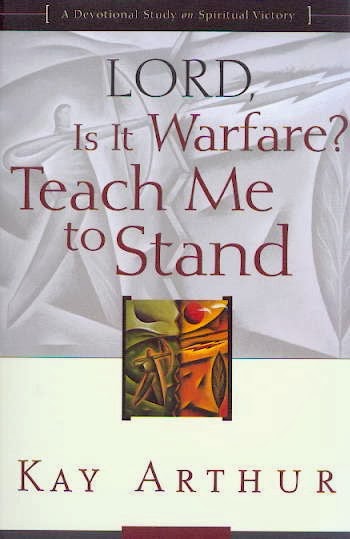 I am going into the second week of the study guide/devotional by Kay Arthur, Lord, Is It Warfare?  Today we come at the concept of spiritual warfare with a bit of a different angle.  The first emphasis that should garner our attention is Jesus Christ.  All spiritual warfare must began with the understanding that the devil has been defeated at Calvary and through the work of the Cross.  The enemy has been defeated at the present moment, he has been allowed to operate on the earth until his appointed time of judgment.  Since one of the primary themes of Ephesians deals with this matter of spiritual warfare, it is clear that Paul came to some conclusions when he wrote Ephesians 1:15-23, in fact there are three truths to understand:

1.      1:18—There is a hope to which we have been called.  That hope helps us to understand that there is a point in the future of which we will have rest from the attack of the enemy.
2.      1:18—The riches of this inheritance or position has been given to us and is clear through the work of the Holy Spirit.
3.      1:19—There is an immeasurable power given to the saint of God through the resurrection.

Jesus Christ is in a heavenly place.  He has all power, authority, dominion, and rule over the dark world of evil.  However, if this is the case then why is there a conflict that a born-again man has to contend with?  If the Lord has all the power in the in this world and the one we cannot see, then why the seeming triumph of evil right now?  Those are valid questions to consider.  These questions fall into a category called theodicy which basically is an understanding of why God allows evil to exist in our world.  Volumes and volumes have been written on this subject and there is no way to give an explanation in this very brief blog post.  It is perhaps a rabbit trail for another day.


When we study the Word of God, our grasp on it is always progressive, meaning that we add to the things that we have previously come to understand.  The things that we gather in serve as a foundation for us to grow and mature in a spiritual manner.  Early this morning, I found myself consider the purifying effect that the Word has on a person’s life.  The work of sanctification or holiness is brought to sharper focus the more our hearts and minds are exposed to the Word of the Lord.  Not for the sake of just reading it, but applying it to our lives in a way that entirely transforms our thinking and behavior.  My intake of the Word has a great impact on my conversion.  As a Pentecostal, I believe in the initial infilling of the Holy Spirit that is evidenced by speaking with tongues.  However, I think that far too many Pentecostals stop way short in their relationship with God by thinking this is the very top of the mountain in an experience with God.  Nothing could be further from the truth.  The work of the Word completes the conversion process and so I believe the chief question needs to be “have you been converted?”  Not, “have you spoken with tongues?” because that in and by itself is nothing.  We have not been truly converted until there is active evidence of a changed life.  That changed life is called conversion or sanctification.  If there is no noticeable difference in who you were before you received the Spirit, then I can be safe in saying that you have not been converted.

This battle with the devil began in Genesis 3.  One of the things that Paul told the church at Corinth was that they should not be ignorant concerning the devices of the devil (2 Cor. 2:11).  Paul tells us that there is a result of our ignorance of the way the devil operates. . . he gains an advantage of our soul.  The ESV translates that verse like this. . . So that we would not be outwitted by Satan; for we are not ignorant of his devices.

The word “advantage” in the KJV gives the idea of the devil over-reaching the soul of a man.  The word picture is of a greedy merchant that seeks and takes all opportunities to beguile and deceive others.  Thomas Brooks, the old Puritan, said it like this:  Satan is that wily merchant, that devoureth, not widows’ houses, but most men’s souls.  I can remember well as a sixteen year old kid having a pawn-shop owner taking advantage of me more than thirty years ago when he sold me a cheap car stereo for an astronomical price.  My dad, when he found out about it, told me that I had been scammed.  When we tried to return it, the wily pawn-shop owner did not appreciate those actions nor would he refund me of my money.  I learned a lesson that day, an expensive one, considering that the minimum wage at the time was $3.35/hr.  Knowledge and experience are very helpful teachers and we can gather knowledge from the Word and experience by walking it out.

C. S. Lewis wrote in his book, The Screwtape Letters, that men generally make two mistakes when they come to understanding the devil.  They will either ignore him altogether or become obsessed with him.  We can do neither!  We are not to have a great dread but at the same time we are not to give him undue attention.  Since Genesis 3 is where he first appears, there are some things we see about who he is, how he operates, and who he is subordinate to.

v. 1—The serpent starts with doubt about what God has said.  This is being played out in the market square today with the huge issue of biblical marriage, homosexuality, and evolution.  Has God really said that marriage is a union between a man and a woman?  Has God said that sexual purity is the way to go?  Did God create the world in six days?  Were these days actually 24 hour days?  Question, question, question, doubt, doubt, doubt. . . Hath God said?!  That was his trick 6,000 years ago.  But humanistic thinking wants to tinker with marriage and creation.  When you keep tinkering with it, the Bible is no longer God’s Word but a book of fables and morals.  Paul noted that the problem with this kind of thinking is that it leads men down the wrong road. . . Professing themselves to be wise, they became fools. . .
v. 4—The serpent speaks exactly opposite of what God has said.  We can see this also in Galatians 5 where Paul makes the comparison between the works of the flesh and the fruit of the Spirit.
v. 5—The serpent will try to elevate man as an equal to God.  This is further replicated later in Genesis when Nimrod determines to build the Tower of Babel.  The devil will forever try to attempt to get on the same level as God.
v. 13—The serpent works through deception.  Thomas Brooks in his awesome book, Precious Remedies Against Satan’s Devices, noted this:  Device (1)  To present the bait and hide the hook.  He shows the golden cup and hides the poison.  He presents the sweet and pleasurable and sometimes the profit that will come by yielding to sin.  But he hides the wrath and misery that will certainly follow the commission of that sin.
v. 14—The serpent is cursed by God because of his actions of deception.

Here are some other observations that I came to while moving through Genesis 3:

There is a connection between the identity of the serpent and the devil in Revelation 12 and Genesis 3:

Revelation 12:9 ESV  And the great dragon was thrown down, that ancient serpent, who is called the devil and Satan, the deceiver of the whole world—he was thrown down to the earth, and his angels were thrown down with him.

By virtue of these two passages, we are well aware that he is an enemy of God but he is not equivalent and never will be!  It is through the redemption of the Cross that we have any hope of salvation at all.