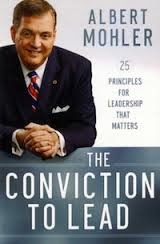 The next book that comes in at the #5 is a book on leadership but it comes at it from a bit of a different angle.  Albert Mohler, president of Southern Seminary in Louisville, Kentucky, believes that all leaders must lead from a formed set of convictions that are unchanging.  He writes that leadership is more than just a man filling a role to accomplish a purpose or fulfill a certain task.  Also if you are a history buff, Mohler has multiple stories woven throughout the book that helps to illustrate what he is writing about.  One notable mention is of Ronald Reagan and how that Mohler actually worked in his 1976 political campaign.

This book is written in such a way that you might read through it on an initial run but there are multiple things to be harvested the second time through.  I found the book to be one that was begging for a highlighter and penned notes to be placed in the margins.  The chapter where he writes about intelligence is very good because he cites a Harvard Business Review study that took into consideration those with a very high IQ.  What the study found was that people can have a very high IQ but if there is not an emotional aspect where they are willing to care, make adjustments, and occasionally totally remove a program they thought would work, these people will not survive as a leader.

One of the places that I would have liked for Mohler to have expanded on much more was the chapter on the leader’s worldview.  That is a buzzword of sorts that has been tossed around for more than a decade as Christianity at large had to grapple with the whims of the post-moderns.  If you will remember the post-modern guys were the ones who led the charge for the concepts (if they can be called that) of the Emerging Church.  The only thing that was able to combat the influence of the EC was the dogged determination to meet their philosophical and doctrinal questions with clear answers from Scripture.  I accidentally found myself in the arena of struggling against some of these fellows in various places and what I found was when you have an opinion about what the Bible says, you can make it say what you would like.  However at the end of the day our opinions about what the Bible says have little status.  What matters is what Scripture clearly states.  When you have a grasp on Scripture, your worldview takes on a whole new meaning.

His chapters on character and credibility are over the top and you will find yourself being quite motivated to do better and be better!  Again, there are multiple historical references that Mohler supplies.  If you are preacher and you are constantly in the hunt for good sermon illustrations, this book is one that you will benefit from.  Here is a quote about credibility:

Credibility is not a function of office or title.  History reveals many presidents, monarchs, and generals who could not lead.  Any number of roads can lead to the corner office, and some of them have nothing to do with leadership.  In a massive study of American leadership, James Kouzes and Barry Posner identified credibility as the single most important issue in establishing effective leadership.

I always have to be careful about any book that is somewhat instructional about reading because this is one of my “vices.”  So when I say that the chapter on reading is the best one in the book, take it for what it is worth.  The thing that is great about this chapter is that Mohler establishes that reading is the best way for you to build your convictions.  Information leads to production.  You may have heard the old adage that inspiration without instruction leads to frustration.  What Mohler does in an awesome way is help us to know “how to read.”  He also talks about “what to read” and “when to read.”

There are other matters that Mohler addresses but there is one other that I thought was very useful.  He writes about the leader and power.  I am always very concerned about leadership and power.  While the landscape is changing somewhat, I fear political power that encroaches itself into sacred and consecrated areas.  Our foremost calling is in spiritual realms and not political ones.  However, when alpha males get into religious settings, if there aren’t spiritual bridles on their souls, much chaos can ensue.  Furthermore the longer a man remains in the position as a pastor or on a district board or general board for that matter, he must keep the fires of the morning and evening sacrifices lit.  This means that there has to be a willingness to hear a dissenting voice when and if you are in the role as a leader.  This idea of power is one that I have read about and wrestled around with for years.  I have read multiple books concerning these matters.

As an aside on this topic if you are wanting to spend some time reading on these issues I think that in 2014 two books that really have stood out to me over the years might help you.  The first one is fiction.  It is written by Robert Penn Warren and is entitled All The Kings Men.  It is a book that explores the rise of Huey Long, former Louisiana governor, and how that his quest for office changed him from a humble man who wanted to do right to a raging ambitious driven politico.  In fact if an assassination had not ended his life, he would have given FDR a run for the White House.  The other book dealt with the pedophile priests’ cover-up in the Boston diocese and the Los Angeles diocese in the Catholic Church.  That book is entitled Our Fathers:  The Secret Life ofthe Catholic Church in an Age of Scandal by David France.

I have rambled on enough but I would reiterate that Mohler’s book was not only instructional but motivational.  These are the best kinds of books!