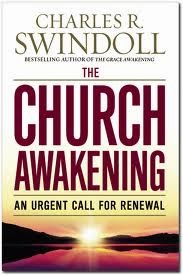 We are at the number two spot in my book reviews of the best books that I read in 2013.  This book is one that published in 2010 and I got around to working with it in 2013.  Chuck Swindoll has been around for a long time and the majority of his books are primarily devotional in nature and it is rare that he would take on a subject like this concerning the need for revival in the church.

I noticed something about my reading patterns in 2013 and that they were mostly concerned with personal revival and corporate revival among the church.  Anyone who is involved in ministry has to understand the reality that when a church is in a state of revival and devotion that things in churches go much smoother.  Churches that aren’t experiencing a climate of revival often turn inward and over the course of time will ultimately die.  We cannot afford for the local church to collapse even though it is under a very heavy attack both socially and spiritually in our day.  On the other hand, it is clear that when a church has well-defined boundaries and encourages its members to have a high input that the Lord can do great things with it.

He wrote a very provoking story about the erosion of land near his grandfather’s cottage that would bear repeating on a regular basis.  In fact there is probably some value in using it as a sermon illustration if you are minister.  In Swindoll’s assessment of the church, he noted three things that can put it back on track which I found great agreement with:

·        Clear, biblical thinking must override secular planning and a corporate mentality.
·        Studied, accurate decisions must originate from God’s Word, not human opinions.
·        Essential changes must occur to counteract any sign of erosion.

Swindoll also deals with the prickly subject of rapid growth of a church and how that it really diminishes the overall impact that a real church seeks to encourage.  He noted that when churches are overwhelmed with new converts that there becomes an uncertainty of purpose, blurred vision, fuzzy priorities, compromised values, and replacing volunteerism with professionalism.  Discipleship takes time and holiness requires sacrifice.  However if either of these are missing, a church is on its way to needing an awakening.  We also have to strongly consider the fact that every church that stands by the truth will always be in a zone of spiritual warfare.

Overall, the best chapter in the book is Chapter 5—What Must the Church Realize?  As I revisit it again from earlier in the year, it is highly marked up with all sorts of comments written in the margins of the book.  Swindoll puts in a quote by G. K. Chesterton on the preceding page of the chapter that sums up where we are today:  Tolerance is the virtue of the man without convictions.  Swindoll writes that there are warnings that we cannot ignore and all of them come from Scripture.  The world will hate anything that stands for righteousness and is a follower of Jesus Christ so we cannot be surprised or even offended by this.  Factor that warning into your thinking when you get up in arms about the political and moral direction of our country.  There is one driving force behind it all which is to remove any and all influence of the righteousness of Christ from our world, by the way don’t be offended or surprised at this.  Another warning is concerning the enemy of our soul and the tone of spiritual warfare.  Another warning comes with an admonition not to love this world.  I quote Swindoll as to why we need the church needs the warnings:

Because the world wants to do our thinking for us.  The enemy of our souls wants to tap into our own sinful natures so that he can drive a wedge between God and us.  And that is why we in the church need a strong warning to awaken us to the reality that characterizes our times.

In this chapter, Swindoll also notes that there dangerous times and people that we must be prepared to face.  The times we face come from the relentless pressure that pours through every media outlet that man has available.  Culture will form your convictions for you but only if you will allow it.  On the other hand a constant exposure to the Bible and biblical preaching has the capacity to change the way we think.  Increasingly I want my own preaching to become more biblically driven and biblically focused than it ever has!  The difficult men are those who Paul wrote to Timothy about (2 Tim. 3:1-5).  They are lovers of self, money, and pleasure.  If it has been a while since you read that description of men, take an opportunity to revisit it and you will see what we are contending with in modern times.  This chapter also has an ominous warning about the danger that comes from within the church which is often motivated by gossip.  But there are also necessary warnings about the things that come from our own hearts.  Lastly Swindoll talks about the deception that has a tendency to get overlooked because every brand of Christianity has a tendency to think they are right.  I would highly encourage you to forget about the thousands of voices and books (blogs?) and get down to some serious theology and fact-checking as to what the Bible has to say.  At the end of the day, no other standard has any meaning except God’s Word!

Swindoll then starts working toward some helpful directions as to how we are to combat the dangers that we are facing.  There is a very simple answer to what we need but men aren’t often interested in such an easy solution.  That encouragement is both very simple and very hard.  At the end of the day it will take pastors who do what God has called them to do!  I commend this volume to you.
Thanks for reading. . .