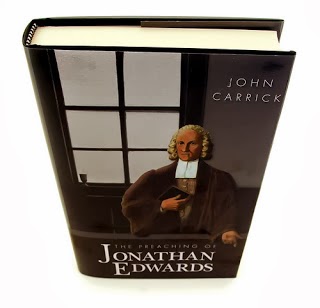 I continue with another book on preaching that falls into the category of honorable mention of the books I read in 2013.  It is a book that analyzes the various aspects of the preaching of Jonathon Edwards.  Before getting into the content of the book, I have to make some mention about the book itself, as in the book binding.  For those who are not bibliophiles this may seem very strange to you but for those of us who still think that an e-reader of any kind does not and will never hold a candle’s worth of comparison to a hardbound book, this book is for you.  The Banner of Truth Trust has had a commitment over the years to make sure that the books they publish are of top notch quality.  Generally their dust jackets seem to have a higher grade of paper than other publishers.  Also on the frontispiece is usually a high quality picture of some kind either in black and white or occasionally in color.  The picture in this book is of the church in Northampton where Edwards pastored.  The backing is very sturdy and the title on the spine is either embossed in gold or silver.  Banner does an excellent job of making very attractive volumes that will look very good in your personal library.

One of the things that this book did for me was reiterate the necessity and priority of biblical preaching.  However, Carrick not only drives this point home but he also takes a look at a large number of Edwards’ sermons and gives examples as to the matters of preaching about judgment and heaven.  He also looks to the introductions, doctrinal emphasis, illustrations, conclusions, imagery, repetition, exclamation, the use of Scripture, the use of instruction, motives, style, and delivery. 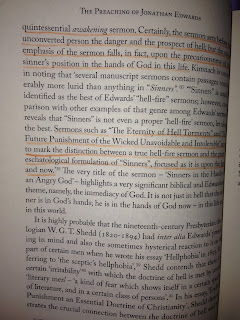 One particular chapter that was very thought provoking was Chapter 16—Different Categories of Hearers.  Carrick took a look at several sermons of Edwards such as The Dangers of Decline, Christian Cautions, Warring with the Devil, Indicting God, Dishonesty, The Sin of Theft and of Injustice, Sinners in the Hands of an Angry God, The Sorrows of the Bereaved Spread before Jesus, and The Distinguishing Marks of a Work of the Spirit of God.  (I found these sermon titles to be very revealing and even convicting as to the kind of sermons that are preached in the modern day.)  He noted that in these sermons that Edwards would address such categories as age, gender, position, and spiritual condition.  Edwards believed that wherever he preached that there were various groups of hearers who were vulnerable to different temptations, susceptible to different sins, and characterized by different duties.  Because of that, it was certain that these groups needed to be addressed.

Carrick notes that Edwards probably was instructed by William Perkins’ book The Arte ofProphecying which was written in 1606 and seemed to be one of the homiletical guides used by many of the Puritans.  Perkins said that sermons of necessity needed to address the different kinds of hearers.  He instructed preachers in this way, “Application is the skill by which the doctrine has been properly drawn from Scripture and is handled in ways which are appropriate. . . of the place and time and to the people in the congregation.”  In other words Scripture and doctrine must be applied so that the hearers can benefit from the biblical instruction as to how the church is to function and how the constituents are to conduct themselves in various roles.

In various places throughout the book reference is made to the sermon notebooks that Edwards used.  They are simply called Sermon Notebook 45 and so forth.  Edwards was a man who was a copious note-taker that was simply an outflow of his commitment to being a student of Scripture.  The rigorous discipline to which he gave himself to this task should be an encouragement to modern day ministers who need to learn the art of freeing ourselves from the many distractions that take us away from our true calling.

Another chapter that I think is worth the price of the book is Chapter 19—The Use of Self-Examination.  Carrick says that Edwards used this as one of his most powerful homiletical weapons which was the searching, probing interrogative.  Edwards used this in one of the very first sermons he preached, The Way of Holiness.  He used these questions in that sermon:

This is the kind of preaching that will turn the hearts of hearers toward revival!  You might argue that people will leave the church if you start preaching to disturb the consciences of men.  I am much more concerned with the accounting that I will have to give to God over the manner by which I attempted to shepherd His church.  It will be the most serious accounting that I will have to give and I cannot give in to a shoddiness and be a workman that will be ashamed of the body of work that I have been called to do.  Just as the various unfit servants had to endure the judgment of the masters in the parables of the Lord there are also those faithful and true servants who were rewarded greatly for their commitment to the jobs they were called to do.

Edwards was a master at asking questions in his sermons.  Carrick gives multiple examples of these kinds of questions that Edwards used.  The questions probe areas about anger, envy, a wrathful spirit, the paying of debts, dealings with neighbors, the matter of a clean conscience, and bitterness of heart.

I am certain this book will be a great addition to your personal library.  Trust me when I tell you that this review falls far short of the magnificent content in this book!