- December 16, 2013
If you are a pastor whose responsibility it is to preach two to three times a week and you want to do it with diligence, you can often find yourself living under great pressure.  If are conscientious about the command to preach the Word (2 Tim. 4:1-2) and to feed the sheep (John 21:15-17) then you have a great challenge to live up to.  Interestingly to me, one of the most important things that a pastor should do well which is to preach, comes under the demands of the tyranny of the urgent which pushes him away from this preparation process.  Furthermore when you are neck deep in the messiness of ministry, your inspiration to preach can be sorely taxed so that creativity, spontaneity, and excellence are kidnapped by these villains.  One of the most curious things to me about ministry is that once you graduate from Bible College or if you are blessed enough to be able to attend a seminary, the opportunities to advance in the area of preaching almost disappears.  In the medical field there is a constant stress being placed on continuing education because of the appearance of new drugs, procedures, treatments, and protocols regularly coming down the pike to help patients get better.  With pastors there are many wonderful conferences to attend but the vast drawback is that very little emphasis is placed on helping me to become a better preacher.  When you consider that a pastor will preach at least 50 times a year and in some instances as many as 130-140 times a year even the most diligent can find this overwhelming.

If you are a regular reader of this blog, it doesn’t take you very long to come to the conclusion that I believe in preaching and believe that it needs to be done well.  Obviously there are some variables that come into play with certain personal talents and gifts which will make some preachers better than others but that shouldn’t give any preacher a cause to not be looking for resources to constantly develop his skills and his resources to preach to the best of his ability.  One of the quotes that the president of TBC regularly told us in our classes was this, “Men, poor preaching is a heavy cross for a church to have to bear.”  That statement from Brother Ensey has been a great motivation for me over the years.  I have constantly been in the hunt for books and other resources that would help me do a better job as a preacher.  It is something that I do not think I will ever master but the quest to do so has caused much personal growth to take place in my own soul.  I am incredibly thankful for that because my times spent in study and preparation to preach has transformed my thinking because of a regular exposure to the Word.  The book that I am giving an honorable mention to is one such resource that can help you do the great work of preaching.

This book by Steven Lawson is a great investment in the preaching life of a minister.  I purchased this book when I attended Lawson’s Expositor’s Conference in Mobile, Alabama in 2012.  When I bought it I really had very little idea how much of an impact it would have on me.  The book alone is worthy of your time and attention but when I found the seminary lectures that Lawson had originally taught on YouTube, I sat down and used this book much like a textbook and cut out some time in my schedule to take this “class.”  I treated it as if I were attending a required class at a seminary and although I did not have access to the assignments, I took some of Lawson’s suggestions as if they were class assignments and have a loaded notebook, a bunch of highlighted spots, and notes written in the margins of this book.  However the most important thing I found was going back through the Psalms in a whole different manner than anything I have done in the past.  Furthermore there have been several sermons that I have preached that were an outflow of Lawson’s excellent classroom instruction.  In the online lectures he even takes his own sermon notes and you get a very good idea of what his preaching notes look like. 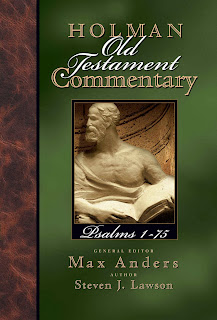 The book is divided up into five units that Lawson calls “phases”:  preparation, exploration, interpretation, assimilation, and proclamation.  What Lawson is really doing is encouraging pastors to preach through the Psalms and work through the chapter in a single message.  I have worked with several of these and have found that trying to squeeze it into a thirty minute Sunday morning message to be very difficult.  However, when you have 50-55 minute time block to work with on Sunday night, you have an excellent opportunity to really preach the Word.

One of the most helpful things about this book is that it gives you recommendations on single volume commentaries to purchase to assist you in your study.  Some of the commentaries were already in my library but there were others that I found used on Amazon and managed to get the majority of them dirt cheap.  I also found out through the lectures in tandem with this book that many of the common study Bibles (MacArthur, ESV, Ryrie, ect.) had the psalms already outlined in them which became very helpful for what I was trying to do.

In addition to this book, I also would recommend that you get Lawson’s two-volume commentary on the Psalms.  It is in the Holman OT commentary set and is NIV based.  You can find these at Lifeway usually for around $20 per volume.  I have no doubt that you will be encouraged to decide to make an effort toward preaching through the Psalms perhaps even in 2014.  Obviously you wouldn’t want to do this with every preaching occasion but I think that working through the Psalms has great merit not just for the church but for the sake of your own soul.  I also found many of the sermons that Lawson preached on the Psalms on sermonaudio.

Some quotes from the book:

If a new reformation is to come in this present hour, it will most certainly be preceded by a return to unvarnished preaching of the Scriptures.  Such a heaven-sent revival would see men of God once again preaching the unsearchable riches of God’s inspired Word, which would surely showcase the Psalms.

No preacher can advance beyond his own personal devotion to Jesus Christ.  No matter how well one studies, the message must flow out of the man.  Every expositor must cultivate his own heart for God.

Because the Christian pastor is primarily called to the ministry of the Word, the study of Scripture is one of his foremost responsibilities.  (John Stott)

Philip Ryken on his observation of the modern church in America:  Their congregations rarely hear the voice of God’s Spirit speaking Scripture.  The post-Christian church no longer believes in the power of biblical preaching, plain and simple.

*I found the Foreward by Hughes Oliphant Old called “A Recovery of the Psalms” to be most excellent too.

**I found Chapter 19—Craft the Outline to be very practical in showing you how to make an outline that will stick in the mind of the people.  For instance in Psalm 1:1-2 we find a man who is satisfied in the Lord, separated from the world, and saturated by the Word.  As you preach, you can repeat this outline so it will lodge in the mind of the people.  It is our job as preachers to declare war on the appalling lack of biblical knowledge of our parishioners.  Our preaching has to be more than just nifty little thoughts!

Unknown said…
I know this is an older post, however, being newly acquainted with your blog, I have just now stumbled across this entry. I am currently watching Dr. Lawson's lectures on The Master's Seminary YouTube channel. Would you personally suggest this as a good source for study, e.g. there is a series of the fundamentals of expository preaching, Biblical Hebrew lectures, etc.? Thanks!
8:45 AM

As with all of the books and resources that I recommend on my blog, I always encourage people to read everything with a filter. That also includes apostolic authors as well. At the end of the day, the final authority is the Bible.