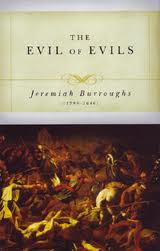 One of the things that give the Puritans a seemingly bad rap is that they appear too obsessed with sin, worldliness, and the coming judgment. That might be a fair statement although there is a host of their writings that deal with the so-called “positive” elements of the Christian life such as liberty, blessing, and seeking after character qualities that reflect the presence of God in our lives. But it must be taken into consideration that the Puritans were as Alexander Whyte termed them, “specialists of sin.” They had a way of describing sin in such a way that would be considered graphically repulsive to most people.

One of the reasons that they had such a huge disdain for any kind of sin was because of their high view of God and Scripture. When you have those two elements at play in your heart, much spiritual progress can be made. Suddenly God is no longer the meal ticket to accomplish whatever dreams you may have for this very short and limited life down here. They believed that by having such a relationship with God it created an atmosphere for them to live a faithful and godly life. They diligently pursued times of privacy with God that involved private prayer, Scripture reading, and meditation on the Scriptures. This action is what led to their understanding of who God was and what He desired of them.

Jeremiah Burroughs found himself in this vein of thought when he wrote this book that contains sixty-seven chapters. As with the book on Earthly-Mindedness, there are various divisions that he works through. The opening chapter informs the reader that these were actually a series of sermons that were preached on Sunday mornings beginning in November, 1641 and concluding in February, 1643. He works with the thought of the corruption of sin through seven different avenues:

1. It is an evil choice to take sin over affliction (trials and/or temptations).
2. Sin is most opposite to a man’s good and far more opposing to the good of man than any trial he has to endure.
3. Sin is opposed to all that is good. It takes away the goodness of all things in life. It brings a curse on us. It is a burden to heaven, earth, and all of God’s creatures. It turns the greatest good into the worst evil. Sin, if left alone, will bring all things to massive confusion.
4. Sin works like poison.
5. Sin has an unending power and fallout that one has to deal with in life.
6. Sin makes a man very pliable in the hands of the devil. (Unique thought in that because Rob Bell’s new treatise has done away with the devil and Hell.)
7. The last part deals with many comparisons and observations that Burroughs makes when he notes the outcome of sin in a man’s life.

As E. E. Jolley would tell you, “This chapter is worth the price of the book!” That chapter to me is Chapter 52. Burroughs spends much effort in making a determination what the difference between depression (melancholy) and a troubled conscience. The question arises for our modern day society; Is the vast evidence of depression really a troubled conscience that God is attempting to use to turn the unconverted into the converted?

Other observations that Burroughs uses in regard to sin come in this manner:

He also marks three things that happen to men who become more prosperous by their sin:

1. Their prosperity becomes more fuel for their sin.
2. Their sin soon gives them more liberty to sin.
3. Their liberty and sin simply hardens their heart to indulge more and more.

Many of you, when it comes to it, will be more loathe losing a coin than commit a sin, more loathe enduring the least shame or nick-name than to commit a sin. Are there not many servants here, or children, who will tell a lie (when they have done evil) rather than suffer a little shame in the family from their parents or masters, fellow-servants and children? What a difference is there between your hearts and the heart of the martyrs!

(Speaking of the Apostle Paul) But when he comes to sin, that is heavy! O wretched man that I am! Thus he gives a dreadful shriek at sin. See what a difference he makes between affliction and sin, and accounts it abundantly more evil to be in sin that to be in affliction.

A gracious heart may bless God for afflictions, bless God that ever He did call him into an afflicted state; but he can never bless God for putting him into a sinful state, though God works good out of it.

Nate said…
I'm enjoying the new series on the Puritans. I recently picked up "The Valley of Vision" a collection of Puritan prayers and devotions. Keep up the great work!

Anonymous said…
I wonder if you could email me part 2 of your story of J.T. Pugh from this link http://www.sermoncentral.com/illustrations/sermon-illustration-philip-harrelson-stories-25901.asp

Anonymous said…
Hi, yes this article is actually pleasant and I have learned lot of things from it
on the topic of blogging. thanks.
my page > Recovery powerpoint
8:24 AM