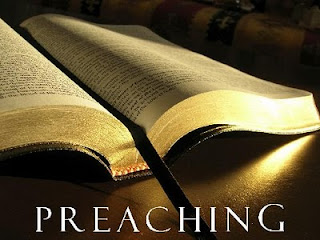 I am using this series of blogs leading up to the 40th anniversary service of Brother and Sister Harrell in Bridge City, Texas on March 20, 2011. For all of the church growth experts who pontificate that you can’t build a church on preaching ought to go visit Bridge City! It has become even more obvious to me as I have written just two blogs about Brother Harrell and his preaching how much effect he has had with his devotion to preaching.

My first visit to Bridge City was in December of 2003. After the morning service, I went to eat with Ken Raggio and his aunt and uncle at a restaurant just outside of Bridge City. While we were eating, Brother Raggio’s uncle started talking about Brother Harrell’s preaching. I think I am correct in saying that he has been attending the church for more than thirty years. He started pulling out titles of the sermons from the ‘80’s. I have to admit that I cannot recall the sermons that he mentioned but I do remember him saying that during some of the most difficult times in his life that not only were the sermons effective but he also talked about the stability that Brother Harrell modeled. He said that no matter what was going on in his life or in that of his family, he always knew that Brother Harrell was going to be in that pulpit on Sunday morning, Sunday night, and Wednesday night.

The longer he talked, the more I felt something rising in me. I wanted to do the same thing with my own preaching here in Dothan. However, I did not just want it for myself; I wanted that for every friend of mine who pastored a church and those younger men coming along behind me. I do have to add to this post that in my own situation, I knew the same stability with my own pastor who later became my father-in-law, Joe Patterson. That stability modeled in those elders lives needs to prevail in our day too! I am reminded of the strong character trait of stability when I think of Brother Harrell. In character of this thought, I am reminded of a sermon that he preached entitled, “Oh Consistency, Thou Art a Jewel.”

When you think of stability, especially in the context of being a pastor, you realize that there is an opportunity to create a vast body of work. With that in mind, the following is nothing more than just a listing of some of the different series of sermons that came out of the Bridge City pulpit.

The Favorite Sermons series was initially preached in 1994. Brother Harrell reached back into his tenure of twenty-three years of preaching and re-preached some of his favorite sermons. A similar series was repeated after Hurricane Rita came through in 2005. The listing of the original ’94 series is as follow:

1. When God Smiles
2. When Jesus Sighed
3. The Day I Declared My Dependence
4. The Seed by the Wayside
5. Three Precious Things
6. Doubting Our Doubts
7. Power to See Life Through
8. You Can’t Carry Your Own Cross
9. Supposing Him to Be the Gardener
10. Long Ropes Need Strong Stakes
11. Oh, Consistency, Thou Art a Jewel
12. I Will Love You, Tomorrow

Another series of messages he preached was called Messages on Comfort which was preached in 1996. They are listed:

1. Healing In His Wings
2. Jesus Is So Approachable
3. The Foothill Principle
4. You Can Face Into the Wind
5. Branded by the Marks of Jesus
6. Chains
7. The Storm of “Not Yet”
8. Light Sown
9. The Father Is With Me
10. Mysteries That Defy Explanation

Another series of messages was on the life of Peter in 1995.

1. Peter and His Call
2. Peter and the Question that Never Got Answered
3. Peter’s Lesson on Forgiveness
4. And Peter Followed From Afar

Brother Harrell preached a series of eight messages on the life of David in 1994. Other various series of messages came at different times and I do not have the dates available to me for those. There were fifty-six on Genesis, Exodus had forty-four, there were six messages on Nehemiah, Luke had thirty-six, Acts had twenty-seven parts, Romans had twenty, 1st Corinthians had eighteen, Ephesians had twelve messages, Hebrews had nine messages, 1st John had eight, and the Revelation had sixteen. He also did a fifteen-part series on the Tabernacle. Women of the Bible comprised a fourteen-part series. He also did a series on “Thoughts” and on Justice.

These are the kinds of things a man can do if he will go in and stay through thick and thin. I realize that as one looks back over a forty year period that it was not always a yellow brick road to walk but through discipline, determination and devotion, Brother Harrell has impacted the church in Bridge City.

I have had a number of e-mails sent concerning his preaching. They have originated from both laity and ministry. I have a request for you. Next week, I am going to pick out the best sermons that I heard Brother Harrell preach. I realize that all hearers listen differently to preaching and some sermons seem to home in you because of the state of mind and life you may have been when you heard the sermon. My request is that you would e-mail me your favorite or even a “top ten” you have heard Brother Harrell preach. My intentions are to list the titles next Friday as a last entry for this series of blogs. I will place them there with your name by them or if you wish to remain anonymous that will be fine also. This is where I need your help beyond just reading. My e-mail address is philipharrelson@gmail.com .

Unknown said…
You are quite a writer. Bro Harrell preaches alot on principles, and as he remarks, driving it into our soul. Another statement he makes frequently is there is no other place he'd rather be than here in the marshes of Bridge City. He makes it sound like the mosquitoes aren't really that pesky. The Lord had it planned for him to be the Pastor of our church.
Keep the blog coming.
Betty
7:49 PM

Anonymous said…
I am also enjoying this blog. So many favorite sermons..."Tell Hell I'm Getting Back Up" (just before the devastation of Hurricane Rita "Things that I Have Learned" "The Oil of the Apothacary".....many, many more... Love my pastor!!
8:19 PM

Anonymous said…
Your blog is amazing.

I am one of the orignal members of
the congregation present when Bro. Harrell took the pastorate in Bridge City.

He is an outstanding pastor,
preacher, and spiritual leader; a great man of God. He is a Christian in the truest sense of the word.

He has given his heart and soul
to the Bridge City Church. We
are so blessed to have him as
our pastor!
10:41 AM