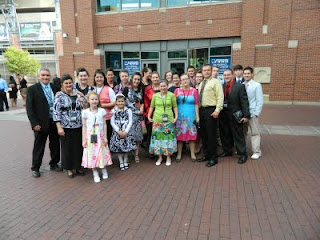 After getting in the bed around 2 AM, we were about half brain-dead this morning and adjusted the schedule a bit and slept late. We left the Hampton Inn around 12:45 and went to a mall just down the road and ate in the Food Court. Overall they had excellent food that ranged from Chinese, Italian, and Deep South BBQ ribs and everything in between. After everyone had been fed and watered, we went to the Nationwide Arena where the North American Youth Congress is being held to register some of the additional folks who did not pre-register.

Chad Kirkland and I drove around the Arena district in search of a paid parking lot that was cheap and safe and we managed to find a parking garage off of Vine Street. This is where we parked six years ago when we were here and the walk from the parking garage to the Arena showcases the uniqueness of the district. Cobblestone walkways, rustic restaurants, and coffee shops are all within walking distance of the Arena. Columbus is one of the best areas to host a conference of any of the multiple ones that I have been to over the years.

When everyone got back on the vans to go back to the Hampton, you could tell that they were excited and ready to get things rolling on why they had made the trip. The theme is Upside Down from Acts 17 where it states that the apostles were the men who turned their world upside down. Just as the 1st century church needed such a demonstration of the Spirit, our world is in the same need in the 21st century. 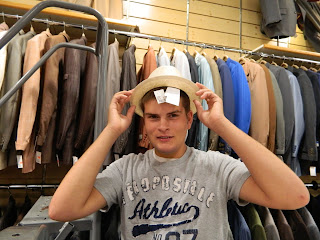 By the time we got back to the Nationwide Arena, the crowds were beginning to pour in. While we parked the vans, our gang managed to lock down excellent seats for us in Section 121 right off the main floor. We were probably 25 yards from the platform. They started with the North American Music Talent Search which introduced five guys that I had never heard of. We listened and then sent a text message to somewhere out there where all text messages go for who we thought was the best one. I forgot the fellow’s name I voted for but did remember it was Male4. I think they will tell us the results tomorrow.

When this was over, the countdown for the opening night started with the roll-call of the states. Since Alabama is always first, I think we all get caught off guard when to yell out and it always comes across as sort of week. Of course, Ohio, Indiana, Texas, and Louisiana always blow the roof off with their yells because they have the biggest groups.

While I watched the electronic countdown, I thought of the hour-glass which only has so many grains of sand in it before it succumbs to the state of empty. When we see things like this, it ought to stimulate our thinking into doing something valuable with our lives. I think that my greatest fear is that I will waste my life on the superficial and immediate instead of investing in it a depth and consciousness of the eternal.

The General Youth Division announced an app for Iphones and Ipads. You can download it free through the app search function on a variety of smart phones and Ipads. One of the things they are encouraging students to do with a portion of this app is to memorize Scriptures. They have designed a Scripture memory system called M90 which will put you on track to memorize 90 verses in 90 days.

A fellow named Ryan O’neal got up and begin to promote Bible Quizzing. He did an awesome job and with the use of technological wizardry, he inspired many folks to want to get involved in Bible Quizzing next year. The content the next time will be basic Pentecostal doctrine. I found out later that this guy is the Arkansas Quizmaster.

Then the General Youth Division Shay Mann preached a sermon geared toward apps. He called it “Apostolic Apps” and proceeded to preach a very good message that was geared toward students. I will give you the three that he mentioned: Prayer, Praise, and Proclamation. I took a fair amount of notes and will have to add them at a later date. When he finished preaching, the whole place turned into a huge altar service. All parents who farmed out their kids would have been incredibly proud of the way they responded to the Spirit. Good kids are this bunch and those who came to ride herd on them got in the mix and we prayed with all of them. I have to confess that while Shay Mann was preaching, I resurrected my dead Twitter account and posted a number of things that he said. Very Good!!!

After all the great part, we ended the day in the same situation that we get into every year at NAYC and that is the restaurants all close down or require hour-long plus waits before we are served. So after driving a 20 mile search for a place to eat we ended up back at the Hampton to see what we can scrounge up. My guys and I loaded up on junk food in our room and then quickly collapsed knowing that 7:30 AM is coming quickly. We have our first session @ 9:30 and it is called jumpstart. We will certainly need some of that tomorrow!