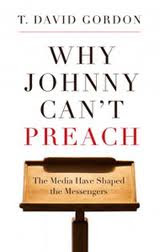 One of the most important things that a pastor does is to preach. The longer I am involved in ministry the more I realize how crucial that solid biblical preaching is to a local church. I have not come to this particular thought overnight but rather a process of about fifteen years. I am constantly in the hunt to look for books, MP3’s, seminars, and journal articles that will make me a more effective preacher. I am often surprised at how infrequently that preachers read books that sort of fall into the “how to” mode of preaching.

I have recently purchased a book that I have had on a wish-list of sorts for almost a year now and have not been disappointed in its ability to deliver some hard facts about our generation of listeners and the preachers who preach to them. Why Johnny Can’t Preach by T. David Gordon is a must read for all preachers. The sub-title of the book is The Media Have Shaped the Messengers. It is a little over 100 pages and can be read through in an evening. I feel certain that you will be provoked by reading it if you are actively involved in preaching.

One of the random thoughts that came to me while I was reading it was to compare the preachers of yesteryear to those who are preaching today. So I made a comparison to some of Charles Spurgeon’s sermons from the Metropolitan Tabernacle Pulpit which is a 63 volume set of sermons to Max Lucado’s various books which are his sermons from the last 10 years or so. I also compared Joseph Parker’s twenty-plus volume set called Preaching

Through the Bible to Andy Stanley’s book, It Came from Within, and I am shocked at the lack of depth between modern day preaching and what was commonly preached back then. Spurgeon and Parker loaded their sermons with Scripture and the illustrations and applications were all scripturally oriented. Lucado and Stanley were more geared toward warm fuzziness that at the end of the day will be like cotton candy.

David Gordon tackles some of the issues facing our generation and points out how modern media methods have literally decreased the ability of both preachers and listeners to think for lengthy periods of time. Gordon takes his title from a book that was written sometime back Why Johnny Can’t Read that explored some of the reasons that children were having difficulties with reading comprehension.

So before you scoff at what the book is implying, think for a moment back to Genesis 3. The first thing the serpent did in the Garden was cause Eve to doubt what God had said. Fast forward over a period of 6000 years and you still have the same thing going on. The serpent is still trying to get us to doubt what God is saying through His Word, the Bible. If he can degenerate the Word and dumb down the ability of the listener to accurately grasp the meaning of Scripture about 90% of his work is done. 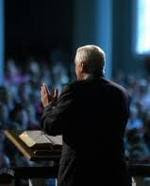 Gordon explores some of the pitfalls that preachers fall into. First of all he states that over years he has listened to multiple sermons that really had no discernible point whatsoever. Secondly he noted that many of the sermons had a text that was read by the minister but did not relate to the sermon and instead of hearing God’s will he heard a man’s opinion. Thirdly he discovered that most churches in their pastoral searches aren’t really looking for a preacher as much as they are looking for a social coordinator, a nice guy, a social fellow, and so forth. Gordon noted the reason pastoral search committees fell into this trend was the fact that most congregations had never really heard sermons that literally grabbed them by the lapel and held them to God’s high and holy standard. I am certain that some readers of this blog might associate such preaching to that of “hell-fire and brimstone” content. While that is a component of true preaching, it is by far only a small portion of the preaching content a pastor will do.

Gordon explores Robert Lewis Dabney’s Lectures on Sacred Rhetoric and asks some very potent questions to the man who preaches. You will not go wrong considering what Dabney and Gordon ask about preaching.

If you are a preacher and are content with your preaching—don’t buy this book, you will waste your money. However, if you are a preacher and there is a pressure in your soul to communicate well and promote truth, get this book and read it through once and then go back and read it again with a red pen. Mark it up and make notations in the margins because it will only help you to do more effectively what God has called you to do—preach the Word!

Have you explored any of the writings by J.C. Ryle? If not I highly recommend him. God bless.

Anonymous said…
I know a woman preacher who had no schooling , back years ago some people couldn't go to school they had to work on farm, i know God taught her to read bible after he called her to preach , this preacher was my sister, so i know first hand God worked a miracle in her, she is gone now to get her reward, as God is the one we appear before ,
7:59 PM