A Treasure Trove You Might've Missed 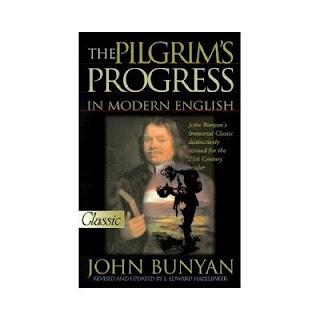 The last two days has left me incredibly pressed for time, however I have made a personal commitment to try and blog at least four times a week until the horse falls over so here we go at almost midnight.

For those of you who have been diligently following the “Discipline of Study” posts, I will get back to those probably next week. I have had to go fishing and have some good men out on the line but it will be next week before I can sit down with them. I want to tell you that I am greatly appreciative of all the comments and e-mails that you are sending in regards to this particular series of blogs.

I am going to encourage you to look carefully at a book that is a treasure trove that you might have overlooked. I am speaking of John Bunyan’s “Pilgrim’s Progress.” Currently this book runs secondly only to the Bible as the most published piece of Christian literature. If you have never read it, you are really in for a good treat. I recommend that you get the updated edition by L. Edward Hazelbaker.

I read this book years ago, but it was not until Brother Harrell in Bridge City, Texas urged me to really dig into this classic piece by Bunyan. It was said that Charles Spurgeon read “Pilgrim’s Progress” more than 100 times in his lifetime. If you have read any of Spurgeon’s sermons then you will have at least ran across one or two times that he has mentioned either scenes or characters from the story. 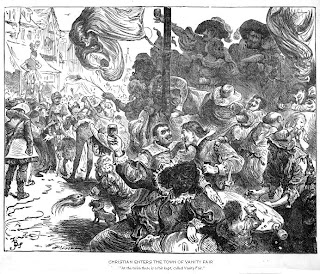 Last night for our mid-week Bible study series, I am patiently working through 1st John and came to the passage in 4:1 where John demands that we do not believe every spirit but rather that we test them. That is to assay or weigh them out through the strong element of spiritual discernment. As I worked through the passage, an illustration that fit extremely well was when Christian and Faithful make their way through Vanity Fair and have to decipher through all of the voices that are clamoring for their attention. It is amazing how well the illustration worked when you read the part where the Bunyan paints up all of his characters in the allegory.

I have preached a few sermons using “Pilgrim’s Progress” scenes as a leaping off point. “The Fight of Your Life” was a message I preached about Christian battling Apollyon in the Valley of Humiliation. Another message I preached was “Giants Under Junipers” which took into consideration the story of Christian when he was locked up in Doubting Castle and had to escape the dungeon. He had wandered off the right path and it almost led to a terrible ending for him. Another one is "The Magnetism of the Finish Line."

The whole allegory is concerned with Christian getting to the Celestial City (Heaven) and the battles and characters that he encounters along the way. Mr. Facing Both Ways, Worldly Wiseman, Hopeful, Faithful, and the Man in the Iron Cage are just a small few of worthy characters that will work for very good “sermon spice” as my friend Ben Weeks calls it. Also another very valuable resource to look for in conjunction with Bunyan’s book is Alexander Whyte’s “Characters of Pilgrim’s Progress.” There are three volumes of Whyte’s musings but there are absolutely essential for one who wants to look a little deeper.

The blogging button is broke... there is no off button.