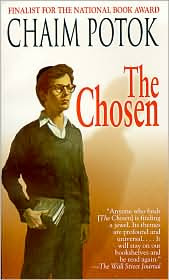 One of the marks of a great book is for the author to be able to reach out to the world beyond the pages and pull the reader into the pages of the tale he is telling. Louis L’Amour is one such writer that has the ability to put the reader on a horse with him or in the middle of a range war with bad hombres. A. J. Cronin is another such writer who with books such as The Citadel and The Keys of the Kingdom forces the reader to live out the depth of emotions of his main characters.

Another author whom I was only recently connected with is Chaim Potok. Both Jason Calhoun and Ben Weeks were flabbergasted that I had never read any of his books. I was encouraged to begin with The Chosen which actually was written in 1967. The actual setting of the book is Brooklyn, New York in a very highly concentrated neighborhood of Jews. It is here that the worlds of Reuven Malter and Danny Saunders collide. Reuven’s father is a Jewish scholar who is encouraging the Zionist movement to find a homeland and form a nation. Danny’s father is a very revered Hasidic rabbi who has a powerful devotion to extreme conservatism among the Jews. Although the story surrounds the boys, you should read this book simply to acquaint yourself with the rigors and disciplined training that the Jewish rabbis go through to be set aside in their calling. I was both amazed and motivated by the disciplines of mind and spirit that I found Chaim Potok describing in his narrative.

The book starts off with a bang with Reuven experiencing a very serious (nearly fatal?) injury at the hands of Danny. (I don’t want to spoil the details so I will be vague with the storyline.) As the book tracks their immense feelings of agitation between the two, they ultimately become the closest of friends and it is through this friendship that Potok gives us the ability to see the best of both worlds.

The book also brings the reader to taste events of world history as they were unfolding in the late 1940’s. Roosevelt’s death, the Holocaust, and the development of the nation of Israel all serve as a backdrop to this intensely emotional story. If you are given to thinking, there will be times that you will find yourself putting the book down and contemplating the varying themes that develop in the characters of this story. This book explores areas like commitment, honor, valor, suffering, and the dilemmas that involve the heart and the mind.

In addition, if you are a minister who is involved in the ministry of the Word, I have a feeling that when you read this book that you will discover that very little discipline is in your life concerning study. These Jewish rabbis and scholars are so entirely given to study and prayer it is remarkable. One the remarkable scenes that I really found very interesting was when Danny went on the initial visit to Reb Saunders study and the description that Potok gives to this. I found a lot of motivation to seek a greater depth of life through disciplined study as a I read this book.

I am thinking that if you start with this work of Potok’s, you will invest your time in reading all this author has written.

daniel hutchinson said…
Thanks for this recommendation. I accessed your site searching for some info on the tale of three kings, which I've just read again.
all the best,
Daniel
4:11 PM

daniel hutchinson said…
I'll comment again after reading this book - it will be the right thing to do. Have you read "Radical Then, Radical Now" by Jonathan Sacks? I think you will enjoy that too.
regards,
Daniel
4:17 PM