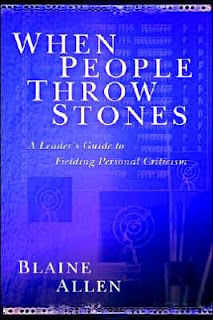 Blaine Allen has managed to do it again. Allen is one of those authors that I “accidentally” found a few years ago when I was trolling our local Lifeway Christian book store. He has previously written a book entitled “Before You Quit: When Ministry Is Not What You Thought.” That book was a good one and it comes from the heart of one who obviously knows what it is like in the trenches.

His second book “When People Throw Stones” is also a very worthy follow-up to his first book. Again, you don’t have to read two pages into the book before you realize that man has worked through some acreage to be able to write as he does. Pastoral ministry is challenging at best but it can be even more of a cross when the words of critics pour out toward the man who is attempting to guide a church.
Recently I was on the other end of a pastor(s) conversation who shared with me the dilemmas they are facing in having to endure some very sharp, unwarranted, and malicious criticism from the churches they are attempting to serve. This is probably what prompted me to buy this book last week because I am well aware that at some point criticism will come the way of anyone who is diligently trying to serve God.

Why are we at this point in our society where criticism can put a pastor’s soul into wreckage? Especially in the setting of the Church, a place where it shouldn’t be.

Allen gives an answer to this:

We live and minister at a time when the Western evangelical church is making a historic paradigm shift. Less and less, Scripture is our sole authority. More and more, a culture that mirrors an antibiblical value system has the final say. In the name of relevance, demographic research determines our music and the shape of our message so that we reinvent ourselves to appeal to the greatest number. Though perhaps done from positive motives, the results are staggering. The audience is not just the customer, it has been crowned sovereign kind. “Do it this way. . . We don’t like it done that way. . . Don’t forget, we can vote with our pocketbook and our feet.” Sovereign king. (p. 86)

Allen gives some insight into what happens with a pastor’s soul in the midst of having to field criticism:

It goes on day after day. Then into weeks and months. And before you know it, years pass—life with it—and you still knead the pain (of the critic and their criticism). Like a mallet you pound away. You beat it hard, sometimes harder than at other times, but always hard. First thing in the morning. Anytime a conversation shows the slightest drift in that direction you grab hold and set its course: do you know what he did to me. . . ??? Pound, pound, pound, pound.
But, do you know what you are pounding? Your own heart. With each blow, it gets harder and harder. Packed like steamrolled dirt. The air cannot get to it. The seeds of new truth won’t germinate in it. What good growth remains won’t be there much longer. The roots can’t spread. The moisture of the Spirit does not reach it. The tender shoots of truth get clobbered one by one. That’s the danger for a servant who ignores God’s roles behind the scenes (pp. 61-62).

However, Allen also goes into the other aspects of pastoral criticism. He spends a chapter on “When to Blow It Off.” In another he transparently writes “When Your Critic Speaks the Truth.” A couple of others are also worthy of mentioning: “When God Doesn’t Defend” and “When You Don’t Want to Forgive.”

He also gives a checklist of sorts to help determine some crucial things about criticism and how to field it:

I realize the economy is shifting daily but this book might be a worthy investment of your time especially if you are on the receiving end of criticism right now. Otherwise, it might be a good book to get to read to prepare you for the future, because I have discovered that no man is immune from this kind of activity.

I am also linking some previous blog posts to this one concerning church problems. Part One and Part Two.