Prayer is one of the most crucial things that we can do as Christians and workers in ministry.  What a tremendous need in our hour to have praying pastors and praying saints in the church.  But as you quickly come to understand in the area of prayer, it is not easy.  In fact, it takes hard work and rigorous discipline to become a consistent person of prayer.  It is often easier to plan, to visit, to study, or do a multitude of other “church” things besides give ourselves to prayer.  If there is a great mandate for the apostolic church it is expressed in Acts 6:4 where we are to give ourselves to prayer and to the ministry of the Word.  Those two actions do more for the work of God than anything else that we may determine to give ourselves to.  One of the tricks of the enemy is to move us out of prayer closets and into arenas of public ministry totally devoid of spiritual power. 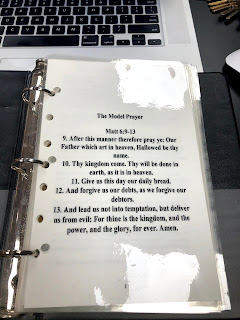 Back in late ‘90’s, I was invited by Pastor Jerry Dean who serves as Senior Pastor of the Pentecostals of Bossier City to something that he called the “Fall Classic.”  It was a time of spiritual input, mental refreshment, and godly fellowship packed into two nights and one full day.  He started it as an effort to encourage his staff and lay ministers in his local church.  As it continued to gain steam, he opened it up to a number of ministers scattered around the nation who were invited personally by him to keep the group to 40 people or so.  The first night, he asked for two guest ministers to speak on matters of ministry, personal experiences, and so forth.  All through the meeting, there was a mixture of prayer, worship, singing before we took communion.  The second day and night, Brother Dean would speak and then he would ask some of the men to preach and that was again followed by the ministry of the special speakers he had chosen to preach in the afternoon and night.  It was there that I first heard Brother Joe Osborne and was impacted in a very powerful way.  I still remember the messages that Brother Osborne preached that fall about goats and about being a true minister of the Lord as evidenced by the life of Eleazar.  Pastor Harold Hoffman was there another year and he has always been an inspiration due to his unique ministry of the Word as well.  Some of the friendships that I developed there are still intact after more than twenty years ago and I am thankful for that.  Special guests that he invited to speak over the years were T. F. Tenney, Vesta Mangun, and Kenneth Haney among others as well.

The food was always incredible, and it was served by the people in the local church.  At least one of the meals was always Louisiana gumbo, crawfish, and etouffee.  Brother Dean and the church always went first class in their efforts to serve us.  One year Brother Dean gave us a copy of a prayer journal that he had written.  It would ultimately become a book.  It was a compilation of Scriptures that he called “The Model Prayer” working with the prayer the Lord instructed all disciples to pray from Matthew 6.  That night Brother Dean told us that he would like to pray for us.  He started praying, using the Scriptures in that guide, and the Holy Ghost fell in the choir room where we were met.  The gifts of the Spirit were in operation that night as well and I can truly say that I can look back at that prayer meeting and tell you emphatically that it was one of several very memorable ones of my lifetime.  We all have had special times of prayer, but that is one that will stand out to me until I go to my grave.  The copy of those notes that Brother Dean gave us is still in my possession.  I have used it so many times that I have lost count.  I took the pages he gave to us and went to our local Office Depot and got them to laminate the pages and then I placed it in a notebook so they would be preserved. 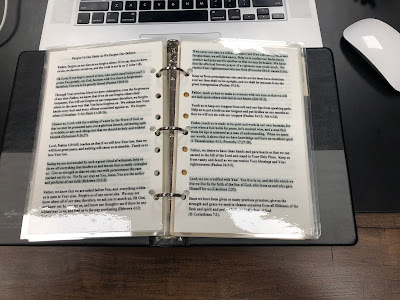 That was the first time that I had ever heard anyone mention a prayer journal or for that matter praying the Scriptures.  That prayer guide has been with me so many times over the years and I am so very thankful that Brother Dean gave it to us.  I continued to pray with it, but I also started buying hardback journals which at the time were just cheap imitations of Moleskin and Leuchterm journals that I had no idea even existed.  I started writing out lists of things that I had prayed for and about.  It became a very profitable experience in a spiritual way that has helped me to see that the matters that we bring to the Lord in prayer are taken care of by Him.  More times than not, I have gone back and read the things I have prayed about over the years and I have seen the grace and power of God in action as He has met the needs that were so weighty and concerning to me at the time.  Our work in prayer is etched out in eternity and there will come a time when we will see our record of prayer.  I am more desirous now of having a gainful recording of private prayer than I have ever been in my life. 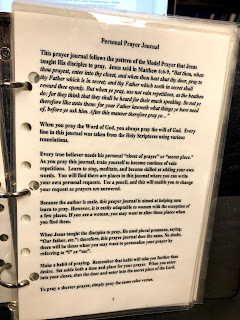 Prayer involves sacrifice!  Perhaps one of the reasons that few people really flourish in prayer is due to the lack of real sacrifice in their lives.  When the priest serving in the Tabernacle walked into it, he was immediately confronted by the Brazen Altar.  It was there that the sacrifices were offered up to the Lord and that was where the fire fell.  If there wasn’t a sacrifice, there was no fire.  Don’t forget that the Brazen Altar was the source of the fire that was carried in the golden censer to the Altar of Incense in the holy place.  It was the altar of prayer whose smoke entered into the nostrils of God.  No sacrifice meant no fire, which meant that there wasn’t burning incense to be offered up to the Lord.  Effective spiritual prayer has to be accompanied by fervent, spiritual sacrifice!  Your prayer life is going to cost you something!

There are a number of prayer journals/guides that you can find if you are diligent.  I will suggest to you three others that have been helpful to me.  The Valley of Vision and PiercingHeaven is a compilation of prayers from Puritan preachers.  While I would certainly not agree with all that these prayers are about, I have to say that they have been helpful tools for me.  The last one that I will mention (and there are many others) is one that Beth Moore put together around 2000 entitled Praying God’s Word.  I have come to discover that anything that can help me in my life of prayer, I want to invest in it.  Personal holiness is greatly affected by my private prayer life.  Our Lord needs holy men to do holy work.

What are some of the things that you need to write out or pray through with your prayer journal?

Gratitude—Thank God for supplying you with the simple things in life (i.e. health, food, sanity, ability to read/write, etc.).

Meditation—Think through passages of Scripture and even biblical characters and ponder what God has done for you.  Then think through how you would like to integrate those things in your life (i.e. perseverance, integrity, honesty, forgiveness, etc.) and write these things out.

Worship—Thank God for the blood that was shed for salvation, for his protection, for the benefits of being a saint of God (i.e. Ephesians is my “go to” epistle to see where my identity and position is as a child of God), for the power of the Spirit, etc.

Requests/Petitions—Write out the names of people you are actively praying for, write out the trials and challenges that you are having to work through, specific spiritual traits that you want the Lord to entrust in your life, etc.

Answers to Prayer—Don’t forget to write down where the Lord has specifically answered the prayers that you have prayed.  Far too many times we look off to some far land or some person that we may see as greatly spiritual and think the Lord only works in their behalf, but He is doing much in all of our lives.  Don’t allow the enemy to put seeds of doubt in your mind as to a seeming lack of God’s blessing and answers for you personally.

May the Lord bless you in this coming year as you give yourself to prayer and ministry of the Word.  Thanks for reading. . .

Abe Dillman said…
What a great, timely article, Bro. Harrelson and thank you sharing your burden. I always enjoy your blogs and glean much from them. Your sermons have also been a great blessing over the years.

There are aspects of John Bunyan’s famous allegory Pilgrim’s Progress that have more details as you read on through the second portion of it concerning Christian’s wife and children who flee from the City of Destruction.  As their story unfolds, we read about some events that Christian went through but is not as detailed in the first half of the story as he is relating a first person account.  The story told by one of those characters in the second half is who I want us to visit with now.  The character is Valiant for Truth.  What a powerful name that Bunyan picks out for this young man, this young soldier, this young minister.  Bunyan is playing off Jeremiah 9:3 where the weeping prophet notes that there are some who aren’t valiant for the truth.  One of the chief characteristics of John Bunyan is pointed out by Charles Spurgeon and it is observed very clearly in this segment of the allegory.  Spurgeon noted that in reading all of Bunyan’s works and actually having read Pilgrim’s P
Read more
Visit profile