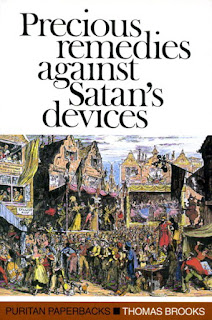 My appreciation for the Puritans seems to grow every year.  A couple of things moved me toward my interaction with the Puritans; one was a person and the other was book.  The person was a retired pastor, Ernie Jolley, and the other was a book that he gave to me.  It was written by Ralph Turnbull, The Minister’s Opportunities, which had a chapter about the priority of study and another on the minister’s library.  In those chapters, Turnbull really stressed finding out who the Puritans were and to begin to read after them.  I took Brother Jolley’s advice and started reading his recommendation of William Gurnall’s massive work, The Christian in Complete Armor, and I took a chance at what Ralph Turnbull recommended with Thomas Brooks’ Precious Remedies Against Satan’s Devices.


I have mentioned before that about the time I really started moving toward responding to a call to the ministry, I had come across the fiction of Frank Peretti.  Whether your thoughts on Peretti are for or against him, I do think that he opened a world of imagination in the Christian mind as to the prevalence of spiritual warfare that we are involved in daily.  While some of the matters of his book can be a stretch at best and false teaching at worst, still he was able to work through fiction to cause the mind to consider the matter of spiritual attack at all levels of society.  Because of that idea of spiritual warfare, I have found myself drawn toward that subject as sort of a candy stick that I had studied over the years.  In fact, I have well over 150 books in my personal library related to the subject of spiritual warfare.  Some of those books are outright nutty, some are heretical, and some have been very helpful.  The ones that I have gathered up by the Puritans have been crucial in developing a greater theology toward this subject.  If you have read the Puritans, the characteristic about these men is their deep devotion to the Scripture and the application of it.  Some of the Puritan works that I have are: 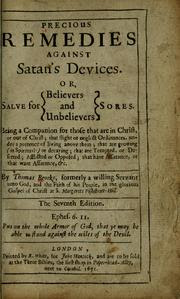 Over the next several days, I will be exploring some nuggets of truth that I have pulled from Thomas Brooks’ Precious Remedies Against Satan’s Devices.  It is my hopes that if you do not own this book that you will give thought to adding it to your personal library.  But before launching into the book itself, I would like to give you a brief biography of Thomas Brooks.  He was educated at the same college that some other Puritans were—Thomas Hooker, John Cotton, and Thomas Shepard.  He preached in London during the Great Plague of 1665 and was a faithful pastor through all of that.  One of the marks of the Puritans is their commitment to preach the Word.  Brooks was no different in this commitment.  As one example, he preached 58 sermons from the single text of Hebrews 12:14 about the pursuit of holiness.  Those sermons can be found in The Crown and Glory of Christianity.
His most famous work was Precious Remedies and it is broken up into a series of thoughts:


In the Appendix, Brooks has even more that he has written:


The ten helps that Brooks finishes with are very good in that there is a summary of the entire book as to how to overcome the devil.  These ten points are: