Book Recommendation--Out of the Flames by Lawrence and Nancy Goldstone 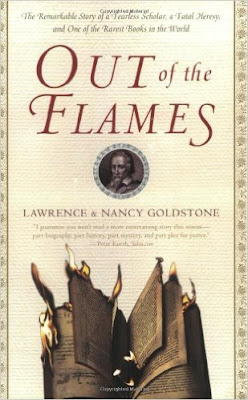 This past March (2016), a good friend of mine recommended a book to me, Out of the Flames, by Lawrence and Nancy Goldstone.  Not only is this book one of the best books I have read this year, it probably will fall into the category of one of the greatest books that I have read in my lifetime.  The subject matter of the book is “the remarkable story of a fearless scholar, a fatal heresy, and one of the rarest books in the world.”  It is the story about Michael Servetus who was one of the most brilliant men that has ever lived.  Not only was Servetus a theologian, he was also a scientist and was one of the first to discover the pulmonary circulation of the blood through the lungs but he also wrote a book that cost him his life.

One of the reasons that I believe this book is so important is not only for the content of the book but also who wrote it.  It is written by Lawrence and Nancy Goldstone, a husband and wife team, who are not theologians.  This is important because of the subject matter they write about concerning Michael Servetus and his battle with one of the most sadistic souls who has ever lived, John Calvin.  The Goldstones are primarily book collectors and write about antiquarian books which are books that are very rare and usually very old.  One of the book’s descriptions states that the Goldstones are interested in the “enduring legacy of books.”  Because they are not theologians or church historians they have a tendency to write their book about Servetus without the normal bias that comes against Servetus by so many of the church historians, theologians, and religious philosophers who do undertake the task of writing about the conflict between Servetus and Calvin.  In fact, I have read before various accounts by authors who generally come from a Reformed bent and it appears to me that before they ever get their thoughts off the ground, Servetus is under a severe thrashing.


The book that Servetus wrote was Christianismi Restitutio and it was considered heresy when he wrote it in 1553.  Perhaps another title could fit better and would be Against the Trinity and its whole thesis was to refute the orthodox ideas that John Calvin promoted in Geneva, Switzerland.  So incensed was John Calvin against Servetus’ work that he ordered his books to be collected and burned.  Only three copies managed to survive Calvin’s havoc and mayhem.  When Michael Servetus was burned at the stake, the last known copy of Restitutio was chained to his leg and burned as well.

Throughout the book, one of the prevailing ideas that you constantly read about is the absolute brilliance of mind that Michael Servetus had.  Not just in matters of theology was Servetus a very astute scholar but he was also very adept at holding his own in matters of both medicine and law.  Perhaps his chief mistake was to take John Calvin’s tome, The Institutes of Christian Religion, which is around 1500 pages in length and writing on every page a Scriptural refutation of Calvin’s take on the Trinity and on predestination.  When Servetus had it sent back to Calvin, upon receiving it and seeing the drastic and comprehensive way that Servetus had responded, Calvin cried out, “He had bequeathed back to me my book and hath vomited on every page.”  That was the turning point and Calvin began in earnest to capture Servetus and have him tried for heresy.

The Goldstones write the book in such a way that there are times where the reader is almost breathless about the way that Servetus eludes those pursuing him.  He uses a variety of disguises and a few times he literally leaps from the outer city walls and flees into the forests running from Calvin’s henchmen.  One of the most chilling matters of the book is when Servetus is captured and receives incredibly horrific treatment in the jail and still has to be his own defense before Calvin’s attack in the courtroom.  What is amazingly apparent is that even though Servetus is functioning on very little soup, poor nutrition, and terrible conditions in the prison, he still manages to thwart the attacks of Calvin in a public trial.  It is only after the prison guards who are in cahoots with Calvin make the life of Servetus most miserable the he is able to win the battle in the court.

I highly recommend this book to those who are interested in reading a side to the Servetus vs. Calvin battle that the pro-Calvin crowd greatly neglect.

Shaun said…
Thank you for this. I will definitely check it out when I can!
12:33 PM

Unknown said…
Calvin is actually in my natural family tree. But thankfully God truly revealed Himself to me in 1980 just before my 18th Birthday.
3:01 PM

Shaun said…
"In fact, I have read before various accounts by authors who generally come from a Reformed bent and it appears to me that before they ever get their thoughts off the ground, Servetus is under a severe thrashing."

Add to the above, some never really go into Calvin's desire for bloodshed. Great point!
7:10 AM