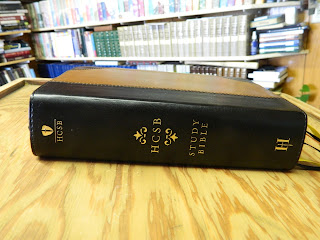 This study Bible is the sixth one that I will review.  Several years ago I ran across a garage sale where due to some very unfortunate events a man had compromised his ministry and his family was selling all of his books, commentaries, and Bibles.  While I did find some very useful books at dirt-cheap prices, I did not want to purchase the Bibles because there was a little something sacred about them even though this man was not of my doctrinal persuasion.  As I was about to leave, his ex-wife came over and gave me a copy of a very nice leather bound Holman Christian Standard Bible that was just plain text with a single reference column.  I started to read it some weeks later and found it to be a thought-provoking translation.

As time passed on, Holman Bible Publishers did what all other companies are doing and hired a team of scholars to put together their own study Bible.  I think by now you may have figured out that I am a sucker for study Bibles and so when the initial hard-bound volume came out, I picked it up at Lifeway for $15 on a Black Friday sale back in 2012.  However, as most preachers are, a hard-bound edition just does not serve as well and so when I began to increase some travel opportunities this year for preaching events, I went a got a handy-size HCSB so I could carry it in my back-pack with a few other travel supplies.  There has been more than one sermon, journal entry, and beginning of a Bible study to begin from hotel rooms when I had this very excellent resource with me.

This particular edition came out in 2014 but has the same notes that the 2012 copy has.  Its general editor is Jeremy Royal Howard along with more than 100 other biblical scholars from a wide array of backgrounds.  I might add this can be good and bad and as with all biblical study material you certainly need to read with a filter on.  Besides the common things that are usually present in study Bibles like Cross References, Study Notes, Maps, Charts, and Timelines, there are some key matters that I think makes this study Bible helpful for those who are expositors. 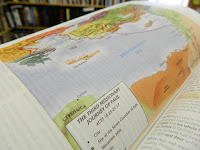 Maps:  I know that I have mentioned in past reviews of some of the other study Bibles about the importance of maps when you are preaching.  The maps in the HCSB seem to be filled with more details that the other study Bibles.  While there are a few maps in the back of the HCSB as most other Bibles, the bulk of them are found near the actual text that is referenced.  They are all color and are fairly high-def in presentation.  This makes it very easy for you to look over and bring good and useful illustrations into your work. 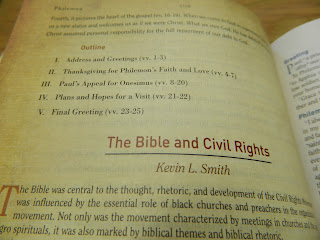 Essays:  There are almost thirty different essays that are present in the HCSB that deal with a number of subjects and some of them are very “hot-potato” issues.  One such essay is “The Bible and Civil Rights” that deals with the issue of slavery.  It is placed very handily next to the book of Philemon where Paul is dealing with Onesimus, the runaway slave.

Bolded Text:  The New Testament is filled with bolded text words and phrases that stand out to you when you are reading through the NT.  The bolded text is the Old Testament quotes.  This is also helpful because by cross-referencing you are able to turn back to the OT and read what has been brought into the NT epistle helping to gain a grasp on the contextual setting.  (I believe in the 20/20 principle of context.  What do the preceding and following twenty verses have to say?  Preachers who take the Scripture out of context are violating a very important matter and they are literally saying that what they have to say is more important than what the text is actually implying.  All preachers need to be very careful about this!)

Photos/Illustrations:  There are very high-resolution photos and illustrations that are present in this Bible.  Some may think this is nothing more than eye-candy but I have also found the illustrations to be helpful especially those of the Tabernacle and its furniture along with a picture of the priest in his holy garb.  Furthermore when you move to the NT you will find more of Herod the Great’s Temple. 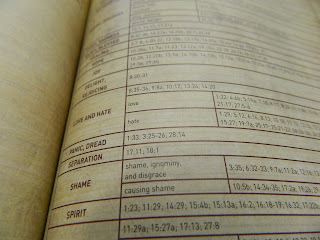 Proverbs Topical Chart:  To me this is the whole deal-breaker for this study Bible and it is the reason that I bought the hardbound copy in 2012.  It is a six-page compendium of very stimulating material for sermons, Bible studies, small-group studies, and just plain devotional reading.  One segment on Human Beings has a subset entitled Emotions that deals with anger, anxiety, bitterness, desire/jealousy, love/hate, shame, and family.  This is just barely scratching the surface.  It has a long section on godly traits and ungodly traits.  This is a gold mine of a resource because you can take these traits and then pair them up with a character in the Bible and have an incredible message.  Good preaching is hard work!  This is where you have to be a workman at your task (2 Tim. 2:15) and we dare not be lazy workmen in what we are doing with our preaching.  The last section is called Principles and of this section there are two that stand out to me.  The one on discipline and the other on wisdom are more areas of much spiritual thought and even prayer.

I would think that you could add this one to your collection and expect to gain some profit from it as well. 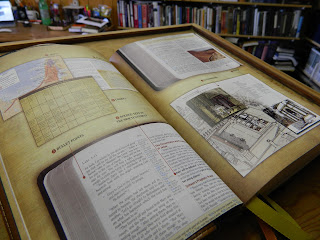 Unknown said…
I have the HCSB Study Bible and I love it. Great review.
5:35 PM