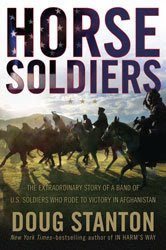 If you enjoy summer reading, you are in for some good recommendations here in the next several days. Stories about the war on terror are beginning to surface by various soldiers who have been actively involved in the battle in Iraq and Afghanistan. A new book that has just come out is entitled Horse Soldiers by Doug Stanton. It is a very, very interesting book about the role the Special Forces played in the very early days of the American attack on the Taliban in Afghanistan.

The Special Forces faced overwhelming odds in getting their high-tech equipment up and down the sides of the mountains on horseback. The word pictures that Stanton uses to describe the 6-foot, two-hundred pound plus warriors riding horses that were meant for 130 pounders, is almost hilarious. You will almost picture an adult trying to ride a three-year olds’ tricycle, knees to chin sort of thing. His account of the SF having to ride their horses on rain-soaked trails that had cavernous drop-offs of thousands of feet will make you consider the dangers they endured that were not combat related.

Finally, the description of the use of GPS to work with the jet bombers and missiles was quite intriguing. For those involved in ministry, you are going to find a number of illustrations to pull from these books and actively use them in sermons.

This is your old friend Daryl Clenney. I use the word "old" in reference to how long it's been since we've seen each other, not our ages!

I enjoy your blog. If you would like, you can check out mine at
www.preachersvoice.blogspot.com