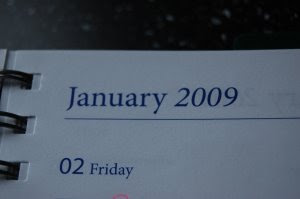 Welcome to 2009 here at the Barnabas Blog. We have a new look and some new additions to the blog roll over at the side. Looking back at 2008, I am discovering
that there were some highs and lows that were experienced and it is apparent that the routine of life is not all bad. The routines of life, even though sometimes castigated as ruts and mightily criticized by a few, can actually be looked upon as a blessing from the Lord. It is through our patience that our soul will be possessed and preserved.

I had some excellent opportunities for fellowship with some good brothers and I am a better man for it. There were a few new friendships that developed in 2008 because I went outside of my normal lanes and again I am a better man for it. I look forward to being challenged by some new friendships that will develop in 2009 also. I enjoyed some conferences this past year and was incredibly challenged by some preachers who made me want to dig a little deeper and work a little harder to make the Gospel clear and powerful.

I accidentally stumbled across some new authors this past year that radically stood me on my head and made me perhaps even more intense than what I already was. I had the wonderful opportunity to hang out in some old used bookstores and spend up some days and cash finding some good weighty matter.

There were a couple of series of articles that I wrote on the Barnabas Blog that generated quite a bit of interest. Both of them are really incomplete as I have several legal pads lying about with additional material for both and maybe I will finish them in 2009. The first series was on the Emerging Church early in the year. The three articles were spotted by Marjorie Kinnee who is the editor of the Apostolic Writers Digest and she kindly published them. These articles were read by Pastor Simeon Young who requested that I edit them for publication in the December issue of the Pentecostal Herald. This was a very high honor for me and I am thankful for it.

The next series of articles were about expository preaching. I was amazed at the response that I received from this. I received e-mails from practically around the world. For those who did e-mail, I am in much thanks for your support. I realized that expository preaching can be used very effectively in the Pentecostal ranks but it calls for much diligence, discipline, and discovery. I trust that those who read those articles who were encouraged and inspired to dig in for themselves into the richness of the Word.

Lastly, I benefited from a number of books that I read this past year but I did not manage to review them and recommend them on the blog (I will try to do better in 2009). I have just finished a book that incredibly high in the motivation area. Romo is the story of Bill Romanowski, the NFL linebacker, who played for the 49’er’s, Eagles, Broncos, and Raiders. I have to be honest and say that I simply picked up the book on a whim at our local Barnes and Noble and really did not intend to get involved in it. However, as I read it, I was drawn in very quickly to the intensity and discipline that this guy gave while he was playing pro football.

More than once in this book, the Lord in His unique way, asked me if I was as devoted to His Kingdom as Romo was to football and the NFL. Amazingly the guy only got toasted (as in drunk/partying) once during his 20 years ranging from Boston College until he retired from the Raiders! His teammates looked at him with some disdain because he was intent on sleeping at least 8 hours every night and had a diet that allowed for 0% cheating. He literally was a warrior!

Over and over it came to me as I read how devoted and disciplined this guy was to the routine that made him great (numerous awards and championships). It did not make me want to play football but it did make me want to have the same intensity, hunger, and desire for the things of God that this man had for success on the field.

This book might be a good one to start your year off with. Even if you do not read “sports” sorts of books, the discipline and rigorous training of this man will inspire you to make a difference in the Kingdom of God!

Anonymous said…
Hope you and your family has a great New Year. Love the Blaylock's
9:30 AM

Anonymous said…
I know Romo was indeed one intense dude. I think he is a good example of the desire to win taking one beyond sportsmanship and ethical behavior. From spitting in opponents face, to allowing those close to him to take the fall for his 'roid use, here is one guy that went too far. Can we learn from Romo? Yes. But we should also pay attention to the message between the lines. Winning should never be more important than maintaining our integrity.

Ryan Gustason said…
Great blog you have set up here. I found both the emergent church posts and the expository preaching posts to be of excellent quality. Added you to my blog roll at APSG!

Anonymous said…
Brother Harrelson,
There is still a people that are the very elect of God. Keep teaching and preaching the whole counsel of God. We will see the fullness of his promises this year.
- Apostolic Saint
12:32 AM