- October 24, 2008
In a previous blog, I tried to introduce the idea of planned preaching and mentioned some of my own foibles in my “rookie” days of preaching. In this post, I want to try and at least attempt to put into your mind the merits of planned preaching. I also know that in Pentecostal circles that this concept can be met with some incredulity because there is that question about preaching “what the Spirit lays on your heart.” I’ve come to understand that when a minister says he is going to preach something that God has “laid on my heart” that it is either a) going to be very good or b) he is terribly unprepared and you are in for a long night.

So what about the idea of planned or expository preaching? My greatest defense of it is what Paul told the Ephesian elders in Acts 20. He informed them that he had preached the whole counsel of God. This passage literally infers to us that he had preached his entire way through the OT and had used the Epistles to do so. All of the Epistles can be cross-referenced with some great OT truth. So when Paul gave the charge in 2 Timothy 4 to “preach the Word” he knew whereof he spoke. I also might add that he was very much being led by the Spirit.

There will be times that a pastor’s preaching will be out of season. He will be bogged down by the demands of a hectic schedule or more often he will be mired in the burdens of the sheep he is trying to lead. Therefore these demands and burdens can begin to encroach in on his preaching and this can be a deadly trick of the enemy. The pulpit suddenly drops down into a very low state and becomes a soapbox for a preacher’s frustrations. The man who devotes himself to preaching through the Bible will continue to have to battle with the demands and the burdens but the texts of Scripture have already been laid out for him to yield to. 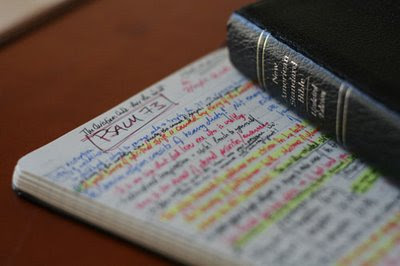 One of the main ways to defeat truth decay is with a strong commitment to solid biblical preaching. Having grown up on the pews of a Pentecostal church, I can remember my own pastor, Joe Patterson, working through entire books of the Bible on our mid-week service. I can recall going through Acts all the way to Revelation. I will confess that there were times that my attention lagged through those Bible studies for a number of different reasons. I am also certain that I do not have the attention of all of those who hear me preach now (although I work extremely hard at it) but I have come to understand the power of Scripture by this simple approach. There were times that I would get involved in a situation in life and suddenly a Scripture would come from the past and it would direct me very clearly about which way to go.

My contention is that biblical illiteracy is much influenced by the fact that we are not given to reading. Everything is visual. The man who handles Scripture wisely and accurately is going to inspire the Church to read their Bibles. As a man gives himself to the diligent study and presentation of the Word, the Church will both read their Bibles and also look forward to the messages that are being preached! A good expositor will be granted by God an ability to create a hunger in people for the Word.

Alexander Maclaren said, “The preacher who has steeped himself in the Bible will have a clearness of outlook which will illuminate many dark things, and a firmness of touch which will breed confidence in him among his hearers. He will have the secret of perpetual freshness, for he cannot exhaust the Bible!”

3. It Presents a Well-Balanced Approach to Scripture (or it just makes sense).

When there is a hodge-podge or shotgun approach to Scripture it leads to much scatter in the lives of the saints. Jesus instructed Peter to feed the sheep and this continues to be a mandate for us. Preaching through books of the Bible or even working through doctrine with the approach of a systematic theology approach can be very fulfilling for a pastor and for the saints. The pastor is continually stretching his own understanding of the Word because of the demands for disciplined study.

When a man only preaches topically the chances are the he will frequently only give the congregation something that he has already learned. The message is either old knowledge or simply rearranged thoughts that may appear to be new. When one consistently preaches through Scripture, the Bible can be seen as a whole and not just a part.

It really just makes sense for a pastor to desire to be an expositor. When I was in RN school, it was good that our professors dealt with things systematically. We did not show up one day and hear all the courses of treatment for congestive heart failure and then the next day tackle taking care of the pancreatic cancer patient. The congestive heart failure material was dealt with when we were immersed in the cardiovascular system. Not only was CHF covered but acute myocardial infarctions, atrial fibrillation, other malfunctions of the heart along with all the drugs and procedures that went along with the CV system. We went through pancreatic cancer when we were moving through the endocrine and gastro-intestinal systems. The systematic process catered to learning how to take care of these patients. To systematically walk through Scripture will be and do much to build the lives of the saints.

Next time I will try to give some good ideas for starting your own series of messages. As always, thanks for reading! Comments are also greatly welcomed. . . .

Anonymous said…
Amen, Brother Harrelson. I've been using the expository method of preaching for years. The Spirit led me to it! As they say a mist in the pulpit causes fog in the pews. We need the clear direction of God's Word ... all of it. Not just the parts the preacher enjoys. This requires the minister getting on his knees and keeping the Book open.

You are putting out some good stuff here. Keep it coming.

Terry R Baughman said…
Thanks for an excellent article. I will share your blog with my Homelitics II class at Christian Life College. We spend most of this semester trying to get them to understand and preach expository messages. Many are so entrenched with topical sermons they can't break out of the rut. They have been raised on a steady diet of topical preaching and inspirational shotgun sermons and have adopted the style. Thanks for challenging us to preach from the text, the real Word of God!
6:42 PM

Anonymous said…
It was with great trepidation that I began preaching my first major "series" and I titled it "What Really Matters". From the start I thought it would last about 8 weeks. I solicited input from many. Little substance came. I finally dug it out and spent 52 weeks on the subject.

You have confirmed by post, as well as by example, the importance of preaching the Word, and preaching less about "stuff".