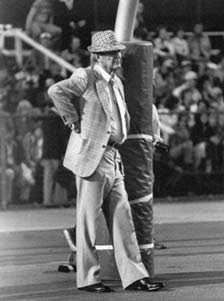 Football in Alabama (I am sorry to say sometimes) is one of the most passionate religions that we have to offer. When I moved to Houston to go to Bible College, I was quite curious as to how the folks in Texas would support their teams. I was able to find some support for the Oilers and Astros but it never reached the passion that I witnessed here for the fans of Auburn and Alabama. Furthermore, I found very little passion for the Longhorns, Aggies, or Baylor’s Bears exhibited by the Texans. This really surprised me coming from the neck of the woods that I hail from.

To this day, Alabama fans are still quite focused on the success of the long departed Coach “Bear” Bryant and his group of stars that played for him in the ‘60’s, 70’s, and early ‘80’s. While I am not an Alabama fan, I must confess that more than once I have been inspired by some of the biographies I have read about “The Bear.” From his early Kentucky days to his legendary rise with the Junction Boys at Texas A&M and then his incredible quarter of a century championship teams at Alabama, one cannot help but admire his success.

As the two-a-days have finally come to an end for Alabama and Auburn, I am reminded of a story that I heard Kenny Stabler (a famous quarterback from ‘Bama) tell on a radio talk show a couple of years ago. He told about Coach Bryant recruiting him and one of his buddies from the Foley area. Both boys had been scouted out by some Mississippi teams but they really wanted to go to Tuscaloosa and play for the Bear. The Bear had an ability to pick out players who had a whole lot more heart than they did talent. He felt like if he could find men to play and coach for him who had heart, desire, and passion it would make up for any lack of talent on and off the field. He looked for character more than talent. He pushed education on these young recruits and told them that books were first and football was second. He was unimpressed with undisciplined talent as he would show with Joe Namath when he sat him down for late night carousing and skirt-chasing. He was not nearly as impressed with talent as with discipline and drive.

Stabler said that when he and his buddy David Chapman left Foley for Tuscaloosa that Chapman’s dad had told his son, “Son, when you live today, I am smashing your dinner plate!” This lesson stuck in Chapman’s and Stabler’s head because both sets of parents had basically told the boys that when you leave home to go to Tuscaloosa to play, you are going to be champions. You cannot come home for any purpose at all. The bridges are burned and there is no margin for error or failure or to give up and quit.

Stabler told about the freshman recruits being locked up in a gym that had no ventilation in the middle of August. One coach yelled, screamed, cajoled, intimidated, threatened, and terrorized those recruits for an hour every day. The gym was hot and smelled of sweat and vomit. Stabler said that there were two 55-gallon drums at each end of the gym that frequently had players bent over expelling breakfast or whatever meal had been most recent. Stabler told of the cramps, the pain, the intimidation by the coaches, and he also mentioned that some of the Crimson’s finest would be reduced to wretching sobs during the whole process. Stabler said it was nothing to be at a place of almost passing out and feeling like every muscle in your body was on fire. There were push-ups, sit-ups, sprints from one end of the hot gym to the other, and there were ropes that were hanging from the ceiling that they had to climb up and down. Not only was the pain physical but there was much mental duress associated with all of the “training.” Stabler said that it appeared to him and Chapman that the coaches were doing their best to make them quit. 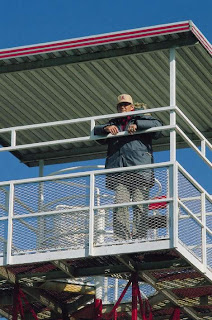 Not only did they have to endure the gym, there were the long practices where they would run one play over and over again under the critical eyes of the Bear. He was in a tower above the practice field and there were times that he would rage and yell and resort to other things and come tearing down the steps of the tower and race to the field in a dead run. He would run the team in wind sprints all the while seemingly trying to break them down. Running plays, passing plays, blocking drills, and all sorts of other demands were made on these young men. What they did not realize until later was that he was creating a championship team out of them. If the afternoon/evening practices did not go well, they would be forced back onto the field at 5 AM to do it all over again.

Stabler said that there were many times that he felt like quitting and giving up and going home. But in the back of his mind was the fact that his parents had told him that his plate had been smashed at the kitchen table. To go home not only meant he had failed but the humiliation of not having a plate to eat from was something that drove him to physically and mentally condition himself to press on.

I have been mulling that thought over today about plates being broken and bridges being burned and back-trails being covered up. There is no turning back in this battle of life and ministry! To turn back is going to bring incredible horror to your walk. No matter how hard the task at hand may be, you must keep going because your plate has been smashed. Failure is not an option.

All of these are nothing more than traps put in your path to make you turn back. . . but on today remember the concept of the shattered plate. . . .

Anonymous said…
Coming from a Fighting Texas Aggie Class of '00, I can say that you never came in contact with a true Aggie or for that matter a teasip from tu and that's a little "t" and a little "u". I don't doubt the passion of bama football but certainly would not doubt the passion of Texas college football. The same rival that bama and alburn has would rival the Aggie/Longhorn rival. None the less, you post was a good read and well taken.