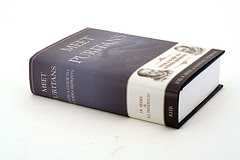 An amazing book that I bought several months ago has been well worth what I paid for it. It is entitled “Meet The Puritans, With a Guide To Modern Reprints” by Joel R. Beeke and Randall J. Pederson. The Puritans, particularly in our day, have gotten quite a bad name for some of their practices in the past. One of the activities that critics of the Puritans like to point out is their involvement in the witch trials and the gross miscarriage of justice that was allowed. Because of that wide-sweeping characterization, much of their writings have been dismissed. In addition to this there are some huge doctrinal differences that permeate some of their writings. However, I have learned a long time ago that you read with a sifter and shake out the bad and keep the good.

This book is basically a summary of the work of many of the Puritans. The chapters run from 2 to 10 pages on each Puritan. It starts with a brief biography and then progresses to a description of their writings, sermons, and books. The book is loaded with good devotional material that will help stimulate your heart and mind from sermon preparation and Bible study. This book has become a highly treasured volume in my personal library.

If you have a high regard for Scripture and for the preaching of that Scripture, this book will certainly give you some motivation in that area. This is especially true when you begin to read some of the sermon titles associated with their study of Scripture. It is also a book that will put you on the trail of more books by the Puritans who spent much focus on gearing men toward prayer, holiness, worship, and the power of Scripture.

Just as a few examples that you will find are:

Thomas Brooks preached 58 sermons from Hebrews 12:14 and they are introduced in his book, “The Crown and Glory of Christianity.” He also wrote a book “Precious Remedies Against Satan’s Devices.” In this book he describes twelve of Satan’s devices and their remedies. He then focuses on eight devices that Satan keeps believers from using the means of grace. He writes of ten helps against the devices: walk by the rule of the Word of God, don’t grieve the Spirit, strive for heavenly wisdom, resist Satan’s first motions, labor to be filled with the Spirit, remain humble, pursue watchfulness, retain communion with God, fight Satan by

drawing strength from the Lord Jesus, and be much in prayer.

Thomas Watson has become one of my favorites among the Puritans. He wrote “The Mischief of Sin” which is a written about the danger of sin. It is divided into four parts: (1) The Mischief of Sin; (2) An Alarm to Sinners; (3) The Desperateness of Sinners; and (4) Hell’s Furnace Heated Hotter. This book has some of the most incredible word pictures that you will ever read.

Benjamin Keach is described in this book also. From “Exposition of the Parables” it is noted that 147 messages are gathered from the parables which Keach preached. In “The Travels of True Godliness” he introduces the reader to over two dozen enemies of godliness. Some of them are apostasy, hypocrisy, legalism, antinominianism, worldliness, and the devil.

In the opening section, Joel Beeke and Randall Pederson give the following reasons that one will profit from reading the Puritans.

You can purchase the book from Reformation Heritage Books for less than $30. It is hard-bound and almost 900 pages in length.