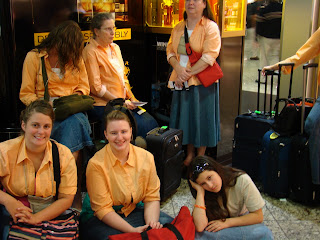 We boarded a much smaller Lufthansa jet at the airport around 4:30 AM ( time). We did not board the jet from the terminal as we did in but rather road a transport bus about a mile or so to get to our Airbus 300. When we started loading up on this one, I knew that this was going to be a tough flight for me. The Atlanta-Frankfort connection had the ability to seat eight people across and this one could only seat six across and the entire plane had that closed-up claustrophobic “feel” to it. To compound these irrational feelings that I experienced was the now almost 24-hour awake period. 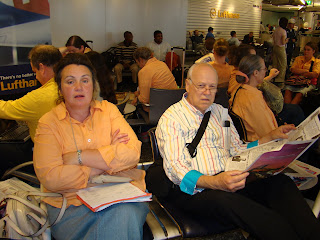 So we boarded and took off and the takeoff was fairly easy and the good thing was that as we climbed to an altitude of 36,000 feet my ears started decompressing and clearing out that feeling that I was going deaf. However, when we landed, the descent was so rapid that practically all of us had problems with terrible pain. Despite chewing gum, swallowing, yawning, and massaging my head and behind my ears nothing worked until we resorted to the old Valsalva maneuver that Brother Patterson recommended. It did work somewhat and as the day wore on most of our ears did begin to clear up. 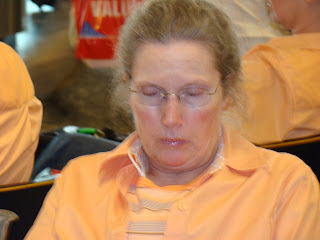 While we were on this flight, since it was close to lunch for many of the travelers, a small sandwich was served. You were given a choice of either chicken or cheese. Most of us took our chances with the chicken. What we found out was that there is a great difference in bread from to . The bread was very hard and seemingly stale but we were informed that much of enjoys this type of bread. So we worked out our jaw muscles (the masticators for all of our nursing school students) until they were in a near cramp state. They did not give us anything to drink until the sandwich was almost totally gone. This was accompanied by half of a Twix candy bar. 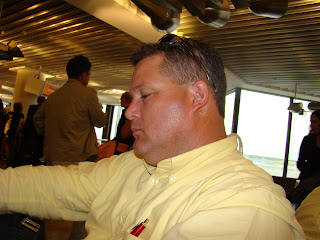 After we de-boarded the plane, we were taken by another shuttle bus to the main terminal in . When you walked into the building you could again notice the progressive spiral downward of our airports. The building was older, although it does appear that they are attempting to build some new buildings out and around the old terminal, it still had a dark “feel” to it.

Everything in the airport was a dull gray or black. Furthermore it was also hot. We are dragging our carry-ons behind us and all along trying to keep everyone in a pack and digging for passports all at the same time. The passport check-in area looked ominous and the guys sitting in the booths checking the passports looked just as ominous. Despite our smiles, thank-you’s, and common courtesy, these fellows were apparently paid to act serious at all times and for the most part gave little if any indication of our attempts at Southern courtesy. Later in the day, I would relate the experience to Brother Mike Patterson and he told me that is a different world and despite the changes in the last few years with a form of democracy, it is still a dark and weighty undertaking to bring the Gospel to the country. 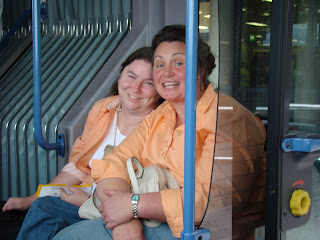 The last little hitch that would catch us for the day was Chad Kirkland’s luggage being lost. As of this moment, we are still looking for it with hopes that on tomorrow (Wednesday) we will be able to find it. While we were getting our luggage off the thingamajig (whatever it is called) my watch started beeping to get us up at 6:15 AM but the sad fact is that we had never gone to bed.

What we did not count on was the huge bus with a large banner running down the side of the bus that said, “Welcome Dothan Prayer and Praise Team.” Mike, Jill, and Daniel Patterson were now on the other side of the ropes waving at us instead of it being the opposite. They made us feel like we were worth a million dollars. We had landed safely in with overall very, very few hitches!!!!!! 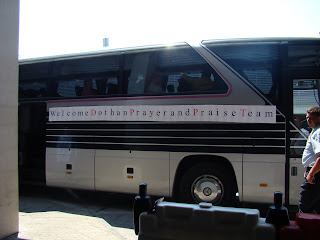 God indeed had His hands on us and we look forward to getting into the Prayer Walks on tomorrow. The Michael Patterson’s navigated us around for the rest of the day as they got us settled into the lodge and retreat center where the conference is going to be held. The majority of the team slept for an hour or so and then we had to go to the headquarters hotel where there are eighteen European continent missionaries. I only knew a few of them but Brother Patterson knew them from all of his associations with the Foreign Missions Division for the last 20 years. The ones that I did know were Brother William Turner (), Brother and Sister Alan Demos (), Brother Roger Buckland (unsure of his field), and Brother and Sister Rodenbush.

When we all started coming in the door Sister Rodenbush was the first one to meet all of us. She started hugging all of the necks that she could get (guys and gals!!!) and we were all very glad to see her. I think that we might need to adopt Sister Rodenbush as one of “grannies”!!! She was so warm to every one of us and made us feel very important.

Also please check out Vera Bailey's amazing talents that we were unaware of.

I will try to check back in with you tomorrow and let you know how it is going. . . Pray for us that we will continue to have the hand of God on us and working through us! I am finishing this post at 3:10 PM on Tuesday afternoon ( time) but it is 11:10 PM time. In the last 36 hours we have managed to scrap by on about 1 ½ hours of sleep. . . Most everyone else has retired and now it’s my turn. . .

Anonymous said…
So glad to see that you guys are safe and sound! We missed you in Wednesday Night bible study last night!!! John and I continue to pray for you. Give everyone our love and prayers. Until next blog . . . John, Renee, Rebekah, Jonathan and Sarah
11:27 AM

Anonymous said…
As I began reading I was laughing and crying and crying. What a wonderful blessing this missions trip is for you. We are praying.
Joann Patterson
1:19 PM