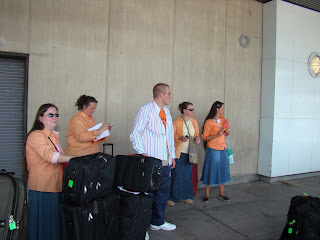 We actually took off from around 4:45 PM. We sat on the runway for at least 30 minutes before actually getting in the air. As we watched the computer screens on the jet, we took off and begin flying west before making an old-fashioned “buttonhook” pattern and turning back east. However, to my surprise we did not take an immediate direct east flight path. We actually begin to fly up the eastern coast of the . We passed over and before passing over the north . After leveling off, we were cruising at around 35,000 to 37,000 feet with an air speed ranging from 585 mph to 647 mph (the max that I saw). 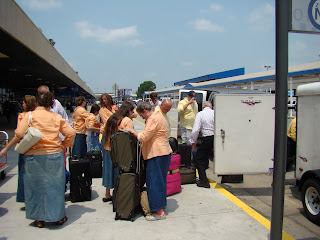 The Lufthansa flight staff was very efficient and very cordial to us. The fellows at the check-in counter at were also very good and extremely helpful to us. The first in-flight meal was some sort of chicken “stuff.” It was palatable and served its purpose but that was about it. However, when they started running the “whiskey wagon” through it got pretty interesting watching the reaction of the passengers. One fellow who was on an isle seat in front and across from me asked the stewardess how much the “spirits” were and when she said that there was no charge he got a huge smile and started loading up. The “whiskey wagon” ran through probably four times in our eight hour flight! 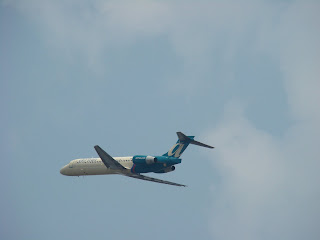 Around 9:00 PM or so, we were cruising along at 640 mph at an altitude of 36,000 feet and suddenly our jet took on the nature of a jalopy. We sort of felt like we were in an old pickup truck traveling about 65 mph on one of the old farm roads in Geneva County. The pilot came on and directed everyone to put on their seat belts and we jumped and bucked for about the next 20-25 minutes. Jeremy McCoy was sitting next to me during that little run and I asked him where the “whiskey wagon” was. We all had quite a laugh with all of that. I understand that Teresa had gone to the back of the plane and was sitting with Regina Miller and they were praying. That tells you who the spiritual ones are! One bunch looking for the “whiskey wagons” and another bunch praying. On Row 23 where all of this was going on was Jeremy, J 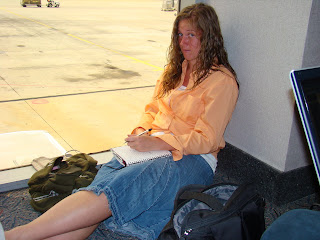 I also understand that Rhonda Lewis was playing with the personal stereo that was with each seat console. She appears to enjoy listening to the classic music channel during take-off and landing. That way she can let the music overcome her husband’s running commentary about all that is going on.

By the time that we had reached we had traveled just south of . We also flew over , and , before overshooting . We went 25 miles beyond the airport before turning back west and landing very smoothly. 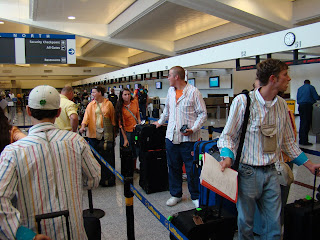 When we got into the airport, it was very evident that this was not . One lady who was employed by somebody (who knows who) gave us some very good directions. The problem was the way the directions were delivered. She was loud and obnoxious with them. However, we decided that she probably needed to be given a break. The fact of the matter was that there was a whole lot of red eyes and dragging feet as we scrambled around the airport.

Chad Kirkland found a hot-dog of sorts along with a cup of water that cost him $5.00. Jay Lewis was about to buy a 20 ounce Coke until he found out that each bottle was going for a price of $5.50. He instead went to the bathroom with an empty water bottle and filled it up for free. He told me he was pretty proud of that water.

Now we are awaiting Flight 3412 that will connect 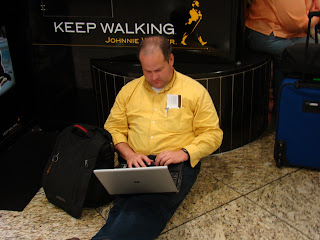 us to and we will find Mike and Jill Patterson. I am told that we have nothing to do for the rest of the day after that which is good. It is now 2:20 AM on Tuesday morning (Dothan time) but it is really 9:20 AM (Bucarest time). Somewhere when we crossed the we lost our night and it has turned into day. What would be wonderful is if we all could find a place to plug in to a “charger” of sorts and get our energy levels back up again. . . . just like with those characters in the Sony Playstation games.

Terry said…
Hey, thanks for the update. I am assuming everyone has reached their destination safely by now. It is 2:01 Wednesday afternoon, Dothan time. We will miss each of you at Bible study tonight. Prayer for each of you will be number one on the agenda for tonight I am sure. Love,
Bro. Mullen
1:59 PM

Anonymous said…
I am beginning to notice a recurring theme... The two pictures with Brother Harrelson both included references to spirits. One was in front of a liquor store and the other was him in front of good old "Johnny". No wonder the whiskey wagon got so much attention.
7:46 PM

Anonymous said…
Glad to hear that you all have arrived safely. Flying is not as bad as everybody thought. I know God's hand is upon you. We prayed for you in church this evening!!
7:47 PM

Anonymous said…
Praise the Lord!!! I am praying for you all and for revival in the country of Romania! Tell everyone hello for me! God bless!