I can think of no U.S. President in my lifetime that has had to deal with as much calamity in his tenure as the current president, George Bush. Only nine months into the White House, was attacked by some very wicked terrorists. Few who saw will ever forget the scenes of the collapsing into a pile of rubble and the damage that the Pentagon suffered on that September 11 morning in 2001. We will not forget the heroics of Todd Beumer and those aboard Flight 93 who diverted a flight that was apparently headed for the White House. All of these challenges came to Mr. Bush over a 3 hour span forcing him to have to spend much of his attention dealing with the war on terror.

Because of my interest in George Bush, I have read a fair number of books about him and his administration. The latest one is The Right Man by David Frum. Frum was hired as a speech writer who really was not pro-Bush when he was hired. However, within a very short period of time, Mr. Frum became very much pro-Bush because of the way that he noticed that the President and the White House staff conducted themselves.

One of the prevailing points that Mr. Frum noted about the Mr. Bush was the prevailing sense of doing exactly opposite of what former President Bill Clinton did. 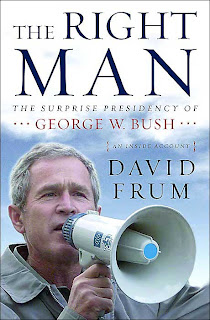 “Well, if the country wanted an un-Clinton administration, they had hired the right team. Was famously unpunctual? Bush was always on time. Had liked to wander into the Oval Office in his sports clothes? Bush required jackets and ties at all times, even weekends. Did ’s wife aspire to be co-president? Bush’s wife moved the First Lady’s office back from the West Wing to the East Wing and eschewed any role in the making of public policy. Were the morally slack? Bush opened every cabinet meeting with a prayer and scorned the petty untruths of the politician.” (p. 13)

In reading this about President Bush, I have come to understand that if you will live your life at a higher level, it will have an ultimate payoff. It will not come immediately but in the long run there will be very few questions about integrity and honesty.

Another strong detail that President Bush retains is his ability to remember small details about the people with whom he works. He can remember where they went to college and who their favorite teams are.

Another character trait that I noticed in the books about Bush is that he is relentless in his discipline to schedule. He breaks down his day into five-minute segments and each of the minutes can be accounted for. It does not matter what happens to the hour but rather to the very minutes that he spends working with specific tasks.

Not only is he careful about how he manages his time but he also is very careful about how he manages his body. He was an avid jogger but his arthritic joints begin to preclude the pounding that he was taking when he ran and so he traded in his running shoes for a nice Trek mountain bike. Some of the trips to Crawford with the bike on his ranch have led to some abraded knees and elbows. Even at his age, he manages to outride the Secret Service and the media detail that comes along with him.

Tonight (1/23/07) he will give the State of the Union address to a Democratic party-controlled Congress who will certainly make his last two years in office to be very challenging. However, when he leaves the office of the President in 2008, his presidency will be marked with the high respect that he carried for his predecessors. The respect of the Oval Office that he had translated into the way that he conducted himself, particularly at a moral level.

Anonymous said…
How refreshing to read such positive comments about our president. I could not agree more. I don't think we've ever had a president that has been so disrespected and for no reason.
2:47 PM

Anonymous said…
Welcome back! I missed you! Barbara
9:05 PM