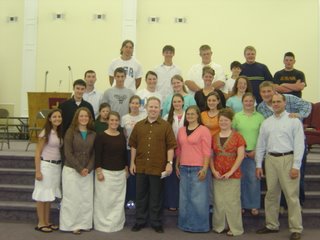 The day started early. . . real early. . . like 0200. Again, we had some folks talking in their sleep. Again, it aroused several folks who all witnessed the fact. Nathan Harrelson was holding “court” at 0200. After getting him settled down, we went on back to bed. I am unsure of what was going on in Dorm D (the girls dorm) but apparently nothing because they fared well in the morning assembly.

The actual day started at 0545 with Bro. Charlie, Bro. Neal, and me. Bro. Charlie walked the grounds and Bro. Neal and I took off for a early morning ride. At the end of the 17 ½ mile ride we had encountered no dogs and the only excitement that we ran across was some guys trying to herd up a large group of cows. The cowboys were shouting and the cows were mooing and we zipped by without getting a real clear look at exactly what all was going on.

Much of the way on the bike ride, my mind was rolling over and over the message that Bro. Tiller preached last night. It was quite a message and for those who will be coming up next week, you owe it to yourself to get a copy of the CD and listen to it. He covered much territory that served for good early morning meditation. I cannot get over the question that has persisted in my mind for several months now: Where will the Church be twenty, thirty, or fifty years from now.

The first morning session which begins at 10 gives the campers right at an hour and half to eat breakfast. When you are trying to run 300+ kids through the line, this time passes by very quickly. But some interesting things happens in this line. Like Stacey Cureton who has for the past three mornings “ridden” around the room in line in a chair. She is navigating the room with a chair that has no wheels. Her “motor” is Ashton Foster who helps “push” Stacey all the way around the room until she can get right up the serving area. I did notice in the cafeteria this morning that there were a lot of “sleepy-heads” who could not seem to get moving very rapidly this morning.

Bro. Neal Williams preached the first message of the day and posed a question, “Who Do You Serve?” He preached about the importance of serving God and then the winning of souls. The value of a man’s soul is of the highest importance.

Next, Bro. Gaddy, from the UPCI General Youth Division, opened with some simple instructions to the crowd concerning a Podcast. Bros. Gaddy and Tiller had a Q&A session that may be downloaded from www.pentecostalyouth.com . They discussed 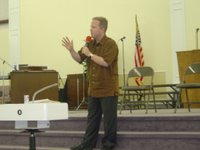 passion for God and how that it affects our daily lives. Bro. Tiller mentioned that there are some non-negotiables which include the New Birth, doctrinal factors such as the Oneness of God and baptism in Jesus name. They then went on to mention some of the priorities of ministry which are a daily relationship with God and His Word. There is a very important factor that is involved with family and it is important that anyone involved in ministry understand that God first established the family and then the Church. Strong families are what build strong churches. When a man loves God, that will spill over into the family life. 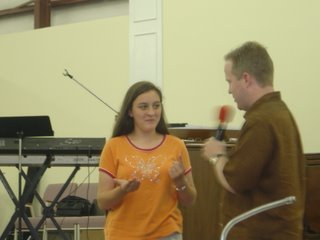 The acronym “S.A.L.T.” can help us to be effective in soul-winners.

Much of the afternoon was spent getting ready for the Pizza Party tonight. It is important that every little hair be exactly in place. Andrea spent most of the afternoon rolling, hot-sticking, and all sorts of other far out sorts of things to our girls and guys hair.

As for the message tonight, I missed about ¾’s of it because Bro. Lewis recruited Bro. Charlie and myself to move chairs. We helped unload an eighteen wheeler that had 500 chairs for the sanctuary. They were stacked in 11’s and 12’s and we worked like we had not had to work in quite some time. 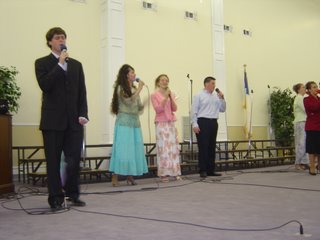 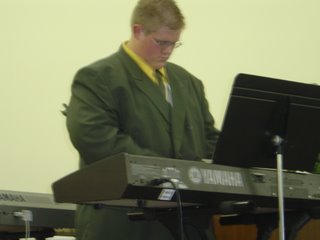 I do know that Bro. Tiller preached about “The Angel’s Hand” from Genesis 19. There was quite another altar service that accompanied the message.

Then the Pizza Party got under way and I left to “blog.” But when I finally was able to start attempting to post today’s events, Blogger went down due to a “file transfer to improve our performance.” I sat outside of Panera and then moved across the street to Books-A-Million (they were closed so I could not go in) because the battery on my notebook was about to give up the ghost. I managed to get “juice” to it but Blogger was still down at 0045 and I had to get back to help the other counselors get the heatherns down for the night. So I will have to wait until tomorrow to try and get the material up and running. 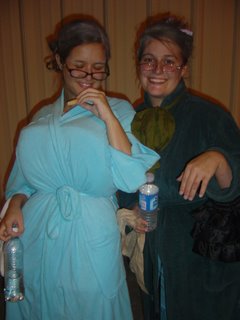 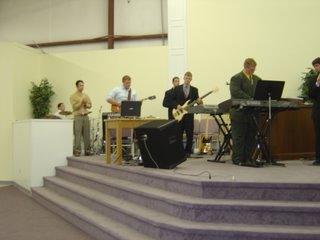 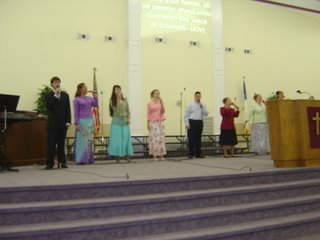 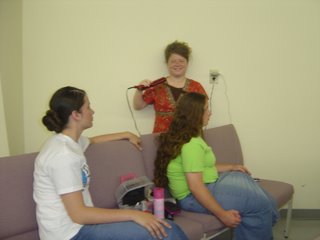 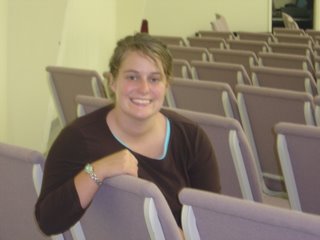 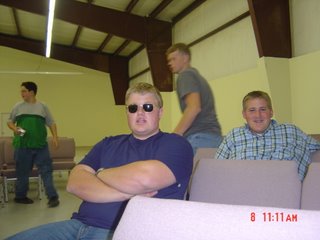 Anonymous said…
Well well.... You know i think that looks like a good singing group there...I think we should start a tour or something... well we might need to learn a few more songs first huh? Well all glory goes to God because of course we were making a joyful noise nad this one time is was actually joyful and not just a noise....Had fun gang.. got to do it sometime at the home church.. hint hint...lol
12:00 AM