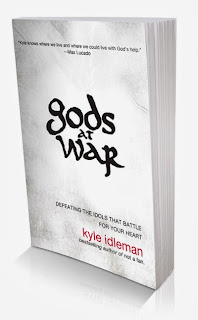 Coming in at # 7 is another one of the $5 books that I picked up at Family Christian during our District Board meetings in April 2013.  This is another book written by Kyle Idleman called gods At War.  This book is very similar to a book written by Bob Hostetler entitled American Idols both of which focus in on cultural and societal issues that are facing the American church.

Both of the KI books are quick reads.  What I mean by that is he writes in such a way that you can move through them fairly rapidly without having to do a lot of stopping, writing, and pondering.  As far as reading goes, I have come to believe that we need to have various streams of depth with our reading.  We should read books such as these that don’t take a lot of thought but they still pack a punch.  Obviously these kinds of books provide various sermon illustrations that will sting when you use them.  On the other hand, I believe that we ought to give our time and attention to reading books that require pausing and thinking and even perhaps writing in a journal/notebook.  Books that would fall into this category are going to be systematic theologies, doctrinal works, and Christian biography.


KI divides this book up into four parts:

He starts the book by providing three case studies from his own pastoral counseling experiences.  All of the examples that he gives will ring true with anyone who is involved in pastoral ministry.  More and more pastors are having to come to grips with the facts that it would appear that the majority of Christians live very messy lives when it comes to living for God.  Far too many dabble in various sins, destructive habits, and low living that greatly hinders what God would like to do with His church in America.  I am increasingly coming to believe that the great need of the hour is prayer and the Word.  Far too many people who populate the pews (or chairs) of the sanctuary are prayerless and Wordless.  Church has become another entertainment venue that attempts to fill some “religious” void that all men need.

There is an incredible illustration about AOL and the search capabilities and how they were constantly a matter of public record.  KI noted that because of this mistake by AOL, online users were suddenly defined by their searchers.  All men no matter whether they are online browsers or completely internet illiterate, are clearly defined by their searches!  After this illustration, KI goes into detail about the matter of the human heart.

This book is written by a guy who has one eye on the culture and another eye in the Book.  KI does a very good job of taking some very basic biblical stories and tying pointed principles to them.  How we need to read these kinds of books to help us to see in the dark.  To see through the darkness of entertainment, money, power, success, and a host of other traps that are strewn along the long path to Heaven.  Distraction and inattentiveness in the spiritual lanes of your life can be fatal.  KI in his book helps us to see that.
Quotes from the book:

Idolatry isn’t just one of many sins; rather it’s the great one sin that all others come from. . . Idolatry isn’t an issue but the issue.

In Hebrew culture, the heart was seen differently.  It was a metaphor for the center or core of a personality.  It was the spiritual hub, and your life flowed from its orientation.  The ancients knew that you could lightly touch the wrist and feel a soft beating—what we call a pulse. . . It stood to reason that everything flowed from the heart—to the Hebrew, not only blood but personality, motives, emotions, and will.

In the old days. . . he (the god of money) was just your garden variety false god.  Money was important, but the king had most of it.  His palace was surrounded by teeming hordes of common people who had no wealth or no hope of ever getting any.

Money has grown so dominant in our culture that it’s difficult for us to stand far enough back to get a perspective.  No matter what we may say, many of us live as if the pursuit of wealth is the real goal in life.

There is only one area of this book that concerns me.  That area has to do with behavior modification.  We don’t need behavior modification, we need spiritual transformation because that will far outlast any behavioral changes we make.  That is why if you are a pastor and you read this book be extremely careful that you don’t point out actions to change without the work of the Spirit because it will not be lasting.