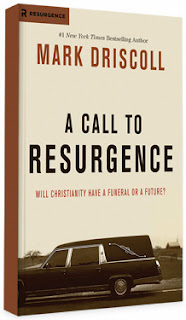 The next book that comes in at the #6 ranking was a book that I again judged it by its cover and then made the purchase.  The title in itself gave me pause for consideration but the subtitle will jolt you.  Coming in the form of a question, the subtitle is:  Will Christianity Have a Funeral or a Future?  No matter whether you are in a thriving church, one that is merely maintaining, or one that is in decline, this ought to cause all of us to think.  As I think of it now, many of the books that I read this year had to do with the need for revival and the overall decline of Christianity in America.  While we can listen to all the cheerleading sessions that we want to, the overall picture in America concerning Christianity at large is very grim.

The author of this book is a commonly referred to in the Reformed circles as a brash badboy who needs to grow up.  However some of that is related to the area that he hails from.  Seattle is one of the most liberal areas of our nation that has become home for legislation that legalized the use of marijuana and has “lawfully” sanctioned homosexual “marriage.”  So given that environment, Mark Driscoll, probably has a reason to be as brash and impetuous with his preaching that is sometimes peppered with slang words that would make many of us in the Bible-belt cringe.

Author:  Mark Driscoll
Title:  A Call to Resurgence—Will Christianity Have aFuneral or a Future?
Publisher:  Tyndale, 2013

Driscoll immediately comes out of the chute with his chapter title to opening the book with Christendom is Dead—Welcome to the United States of Seattle.  Under a heading (One Nation, Under God?) in this chapter, Driscoll gives this observation:

On January 21, 2013, Barack Obama placed his hand on a Bible he may not entirely believe to take an oath to a God he may not entirely know.  Jesus alone will judge his soul one day, but in the meantime we are free to be confused by a man who says he’s a Christian while ending his speech to America’s largest abortion provider with, “Thank you , Planned Parenthood.  God bless you.”

Driscoll ends this section with the following:

January 21, 2013 was more than Inauguration Day.  It was also a funeral.  The highest office in the land made it clear:  “inclusion and acceptance for all Americans” no longer includes Bible-believing, evangelical Christians.

All through the first chapter are very troubling stats that are footnoted by Driscoll.  I have come to appreciate footnotes over the years because it allows you to put your feet into something concrete instead of pulling some nebulous, vague number out of the air to stir the emotions.  I marked up this book and wrote in multiple places in the margins.  Here is what I wrote at the top of page 15:  Way too many Pentecostal kids have come along and have borrowed faith from their parents and grandparents.  They are as lost as many sinners except they don’t know it yet.  I realize that such a blanket statement is going to draw some fire but there is something to be said about the Pentecostal experience and it has to be replicated in their lives.  It has to be more than just the fact that they attend a Pentecostal church every week.  Our kids need to know that there is a necessity of the New Birth which occurs initially when they speak with tongues, the importance of baptism by immersion in the name of Jesus, and a godly pursuit of holiness that is going to make them different from the rest of the world and Christendom.  Furthermore, when visitors come into our churches, they don’t need to be confused as to what kind of church it is.  If we keep trending toward the idea that tongues, passionate preaching, demonstrative worship, intercessory prayer, separation from the world, the operation of the true gifts of the Spirit, and so forth is “old-school” or “throw-back” then we are going to effectively render a funeral of our apostolic Pentecostal churches.  I was greatly grieved as I read through Driscoll’s assessment of the evangelical church in America. 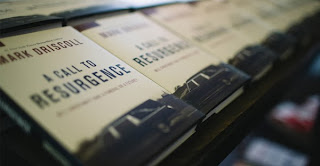 Following is a sampling of some of the statistics that Driscoll listed:

Driscoll also noted the in United Kingdom the demise of Christianity.

Here is what we must understand which the book makes a point of:  without inward conversion there’s no reason to expect outward devotion.  I find all of this very troubling that church has become nothing more than a social outlet with very little spiritual fruit or growth.  This makes me uncomfortable as a pastor knowing that much of this mindset is prevailing in the church that I pastor.  My only hope is for a God-sent, Heaven-rained, sin-convicting, and prayer-committed revival and harvest to take place in the church that I pastor.  Furthermore it needs to grip the entire Pentecostal movement, the UPCI notwithstanding.  If we ever needed men in the pulpits who were committed to prayer, the Word, spiritual passion and hunger, it is now!!!!

Driscoll’s book with stoke you up concerning the absolute need for this!  As a disclaimer, I read a lot of books but I also read a lot of Word too.  Therefore there are some ardent doctrinal and theological positions that Driscoll has concerning salvation, the Godhead, and so forth that I am in complete disagreement with but since I couldn’t find a Pentecostal writer who was addressing the issues he does, I bought his book.  This book makes me want to taste revival and spiritual transformation in the truest sense of the word and I think it will do the same for you also.