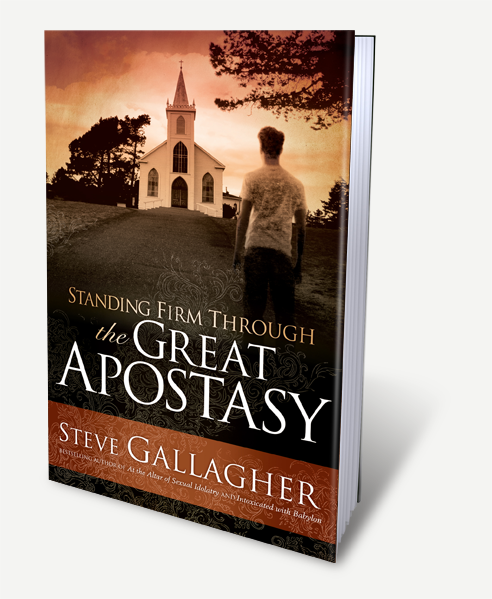 I come to this last best book slot, being #1, of the books I read in 2013 and have found again it to be a very provoking book.  I have gone back and scanned through and reviewed much of what I wrote in it back in January 2013.  I purchased the book in December 2012 primarily on author recognition.  I read a previous book by Steve Gallagher entitled Intoxicatedwith Babylon and found it to be a very good book.  I guessed that would have a pretty good idea of the content that Gallagher would take up with this book Standing Firm Through the Great Apostasy.  This is another book that falls into the category of our personal need for revival and a reawakening of the church to its true purpose.  As I mentioned in a previous post, books on revival and a true need for true repentance and godly conversion was what I spent the most time with last year.

As a pastor, I often have to deal with very ambivalent emotions concerning the state of the church both locally and nationally.  There are times that I feel the great lift of faith to believe that there is an ardent devotion to the Lord and to His Word among those who follow the Lord.  There are other times when I find myself going into a tailspin at the shallow, uncommitted state that we slop around in.  Perhaps nothing like social media reveals the true nature and direction of where and what we are heading toward.  Jesus noted that out of the abundance of the heart the mouth speaks and I think with our modern technological wizardry that now we can discover that the abundance of the heart is revealed through what the keyboard types, what the tweets reveal, and what the Instagram pics expose.  All of this social media exposure can be terribly disheartening when you began to understand the relentless onslaught of the world, the flesh, and the devil on the church.  Visit the profile pages of those who populate Facebook and you see many people who are so immersed in the entertainment venues of Hollywood, the music of Nashville, the insatiable appetite for the fads of Fifth Avenue, and all sorts of troubling distractions that you wonder if there is any hunger for God at all.  Some of what Gallagher addresses in the book relates to this.

I truly believe that the American church has become greatly distracted from the basic tenets of daily devotion to prayer and we exist in a prayerless state.  Churches cannot function if there isn’t private and corporate prayer.  I also believe that we are very anemic when it comes to solid biblical preaching and when the Word is not emphasized by the pulpit, the pews will become Wordless.  Biblical preaching is not a motivational speech, it is not the efforts of a preacher to put a Band-Aid on the scrapes and abrasions of life, nor is it intended to bolster our self-esteem.  Some might choose to argue with that assessment.  But when biblical preaching diminishes the power of the Cross, the cost of discipleship, and the necessity of repentance and conversion, then it can no longer be called biblical preaching.  I would plead with men who are pastors and evangelists to work on your preaching in such a way that it does more than excite the crowd but that it takes Scripture and digs deep into the soul.

We are transformed by the renewal of the mind.  What takes place in the mind directs the actions that are walked out in life.  When you see what is being walked out on the social media outlets there is a great discovery that what we are hearing is not exactly what we are doing.  Or it could be that what we are hearing does not even merit a passing thought as to how we are to conduct our Christian lives.  If that is the case, then every preacher must understand that the burden of the preached Word rests on the shoulders of the preacher.  I regularly hear preachers say, “Ah, you didn’t get it!”  and statements of that nature.  My general thought if the congregants aren’t getting it, the burden of communication is not on the listener but on the communicator.  If I am not understanding the steps to figure out the area and circumference of a circle and the matter of pi related to the diameter and radius, the Algebra prof needs to step up and do his job and clarify it not mystify it.  Sometimes I think we have higher expectations from math teachers than we do from preachers.  Gallagher notes the necessity of preachers being clear in their preaching.  Before getting into the meat of the book, I think one more thought on preaching is imperative.  John Piper noted, “My responsibility as a preacher of the Gospel is not to preserve and repeat cherished biblical sentences, but to pierce the heart with biblical truth!”  I wrote that down in my journal on 1/4/14.  I intend on living up to that this year!

Gallagher divides his book up into two sections:  The True and the False Church and The Great Apostasy.  I can tell you that this book is very much expositional in nature because even though Gallagher is dealing with a topical subject when he writes he literally takes the passage of Scripture he is working with and turns it inside out.  He does this with the chapters, The Meaning of the Parables, Conversion, The Counterfeit Kingdom, and Two Judgments.

The value of the book (and all of it is very good) is worth the second section:  The Great Apostasy.  Gallagher takes a long look at Scripture in such passages as 2 Peter 2 which deals with the false teachers and the passage in 2 Timothy 3 that speaks of the perilous times that will come to us.  If you were to only buy the book for 6 pages or perhaps one chapter it would have to be Chapter 11—A Culture of Corruption.  He spends time developing 2 Peter 2:10, 19 in such a way that you will never read the word “corrupt” or “corruption” the same way.  I don’t want to spoil the concept but he notes the way that corruption has a way of seeping into lives and churches like a poisonous swamp gas that leaves death in its wake.

In another section, Gallagher takes a very necessary hard-line on those who are prosperity and self-help gurus who parade as preachers.  I have noticed a tendency that we are a little hesitant to shy away from calling things as they are in the name of tolerance and civility.  But I recall the G. K. Chesterton quote about those who tout tolerance are those who lack convictions.  The convictions of the early church led most of them to an early grave.  Some would say what a waste to invest your life in such a cause, I would counter and say what a way to invest your life in something that really matters in eternity.

I would make this promise to you that if you would keep this book very near to your study for the next year, it will change the way you approach ministry.  This is a serious book and it needs to be seriously considered.
Thanks for reading. . .