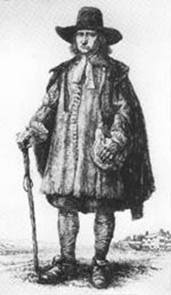 For the last part of this series (Part 1, Part 2, Part 3), I would like to consider how the Puritans preached regularly away from their pulpits. Sometime ago, I read portions of Richard Baxter’s treatise on pastoral ministry. One of the very convicting things that stood out to me in this volume was how the Puritans frequently traveled to the homes of the families they pastored and gave personal Bible studies and even full-blown sermons followed with a time of prayer. Because of this they left a lasting mark on the home life of their parishioners.

Richard Baxter had a system of visitation where he and his two assistants dealt with eight-hundred families each year. They developed a rotating system of moving through the members of their congregation working both the mornings and evenings. They had to make arrangements for the farmers who at certain times of the year were unable to meet as frequently as they would have liked because of the responsibilities brought on by farm life.

These visits were not social in nature but rather the sole purpose was to interact with Scripture followed by times of prayer. Each of the visits would last around an hour and fifteen minutes to an hour and a half. Because it worked so well in the town of Kidderminster, Baxter encouraged all the Puritan ministers to get involved in this kind of work.

By understanding the church as being a flock of sheep, as is painted by Scripture numerous times, the pastor has to be involved with his flock. In fact, 1 Peter 5:2 urges those in pastoral ministry to feed the flock which is among you. You have to purposely stay connected to the church that God has called you to serve. This means that the old-fashioned and somewhat disdained method of home-visitation can be an effective means of discipleship. When our American system of church growth and even the extension of global missions have overdosed on the drive for numbers, it is doubtful that a man can be an effective shepherd over the masses. While it may stroke the ego of the pastor, in the long run his ability to feed the flock of God rapidly diminishes when the congregation grows beyond his ability to disciple. This is why further stress ought to be placed on the daughter work concept so that when a church becomes large enough to extend and birth another church, she should do so! Every flock needs its own pastor and every pastor needs its own flock. 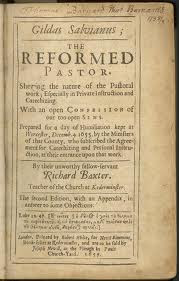 Just as a consideration for that idea, consider what Baxter said concerning taking care of the flock:

God will not lay upon us natural impossibilities. He will not bind men to leap up to the moon, to touch the stars, to number the sands of the sea. . . Will God require one bishop to take charge of the whole county, or of so many parishes or thousands of souls, as he is not able to know or to oversee? Then woe to the poor ministers! This was to impose on them a natural or unavoidable necessity of being damned. . . O happy Church of Christ, were the labourers but able and faithful, and proportioned in number to the number of souls!

The whole object of pastoral care is to bring the whole church to an orientation of spiritual growth so that they have the ability to serve God in fullness and joy. I have to confess that this is one of those times when I wanted to flip the pages on to the next section to rid myself of the conviction that settled in. I am fearful that American and perhaps even demonic trends are working to turn pastors into “rock-stars” of sorts to make them drink from the cup of stardom and popularity. But one old Puritan wrote it like this: God did not put up with a proud angel and He cast him from heaven. He certainly will not put up with a proud preacher!

The calling of pastoral ministry means that I make house-calls to those who are shut-in and take my sermon notes with me. I pray, I preach, and then I pray again for those who need it the most! You may say that we live in an age of various forms of electronic media and I will certainly agree with you on this. However, there is nothing like the presence of a pastor in a home. Don’t think that I have this practice under my thumb because that would be sinful dishonesty. However, I am doing my best to dump some of the church growth propaganda that I bought into in the past so that I become that shepherd mirrored by Jesus Christ and those visiting Puritan preachers. The first time you do it, it will be a little awkward because this is more than just a door-knocking, ‘Hey come visit our church’ stuff! It is getting involved in the spiritual ministry in that home. How our homes need it in our times!!!

When you take you’re preaching on the road, you will be pleasantly surprised at the uncommon and blessed reception that you will often receive. There are several notable things that I discovered among that Puritans to take place when you preach away from the pulpit:

• They became acquainted with the state of mind their congregants were in.
• They instructed those who were ignorant of the Scriptures in matters of salvation and doctrine.
• They could dispense advice from Scripture when it came to matters of the conscience.
• They were able to observe first-hand the spiritual health of the families in their churches.
• They could encourage these things to improve so that depth of spiritual life prevailed.
• They were able to pray for the sick in preparation for healthy recovery or for a victorious death.
• Furthermore they were able to reprove and admonish those who were backsliding.

May God forgive us for confining our preaching to the pulpit!

In conclusion, I must add an important piece of advice; you will come into contact with all sorts during home visitations. First of all, don’t force something on people that they do not want. In the medical world there is something called informed consent which basically is an explanation of any procedure or treatment and its benefits and possible complications. After the presentation is made, the patient and family make a determination about the direction to go. I have discovered in pastoral ministry to use this same method. I will present the Word and then allow the person and God to help them come to a decision about what step to take next. This is the best way to go! High pressure never works in the long run because there is more of a response to fear than real heart-stirring conversion. So don’t force on people prayers and preaching that they do not want.

Secondly, you will run into some self-righteous folk or some who are fully engrossed with their dark master. Keep your Christian grace about you and move on! Lastly, you will find people who are so hungry and thirsty for God that they can drink from a fire-hose. Pour it on them and understand that this is how God uses us to build His church.