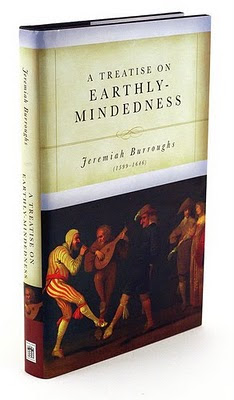 The next few blogs will be about the writings of Jeremiah Burroughs which have been preserved via the printed press and now very accessible through various e-formats. As with all of the Puritans, their writings primarily consist of the sermons that they preached in their churches. If you take their sermons and compare them with what passes for sermons in our days, you will immediately notice the great lack in our times. Most of the sermons that the Puritans preached were around 1 ½ to 2 hours in length. People in our generation think that 40 minutes is a long sermon and some even conclude that the less the better. Furthermore, you will discover that the Puritans loaded their sermons with Scriptural exposition and frequently they would come at their texts from many different angles. I have no doubt that much of the Puritan preaching would probably empty out our modern day churches because there would be very few who could track with their messages.

As you begin to read their material you will immediately notice that they set forth a doctrine in the opening chapter and then spend many pages following to document and cross-reference that particular doctrine. The same practice is noted in Burroughs’ “A Treatise on Earthly-Mindedness.” It is as follows:

DOCTRINE: The great difference between a wicked man and a godly man is that one minds earthly things and the other has his conversation in heaven. I intend to handle both these in order.

Next you will find that they Puritans will give their points as to how they expect to do this. Burroughs’ says he will do it in five ways.

For those who are interested in doing sermon series, this is the introduction. There are seven more that follow this introduction and when you get finished with reading this sort of thing, much conviction will have settled into your heart.

This is how the Puritans worked their preaching to their congregants. These congregations were people who read their Bibles intensely and were very knowledgeable to Scripture. Because of their proficiency with Scripture it forced the ministers to a greater depth of preaching. I pray for a revival of this kind of hunger for the Word in our generation.

Burroughs then goes into the aspect of what he calls “A Heavenly Conversation.” This is the mindset that is opposite of being worldly-minded. The sermons are as follow:

I can only recommend to you to dig into this work of Burroughs and you will find a soul-stretching, heaven reaching, and sin-hating attitude to develop within your own heart. I daresay that if you are a minister that there will be quotes and concepts that will stimulate sermons to come to life in your own preaching.

An earthly-minded man is like Korah, Dathan, and Abiram. We read that they were swallowed up by the earth. So, the truth is, the things of the earth, contentments, provision for themselves and families in earthly things, opens up and swallows up the very hearts of earthly-minded men.

There are dangerous temptations in following after the things of the earth, and there is a snare in them that you do not think of. You think only of the splendor of the things of the earth, how sumptuously you should live and how fine you should be, in your house, in your clothes, and what table you may keep. You only think of those things that may give the flesh contentment. But you do not think of the temptation and the snare that is in them; and those whose hearts are set upon this thing fall into the snare, the temptation.

Earthly-mindedness is the root of apostasy.

Earthly-mindedness is that which will bring destruction at last, as it will drown your soul in perdition.