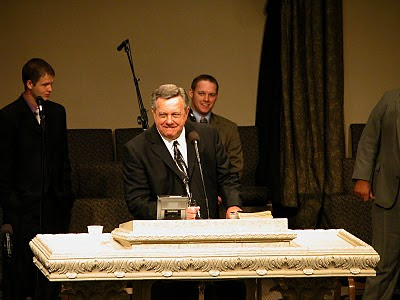 We are winding down toward Number One leading up to the 40th Pastoral Anniversary of Brother and Sister Harrell in Bridge City, Texas on Sunday, March 20, 2011. Before going any further, I have had a number of e-mails asking about sites that have MP3’s of Brother Harrell’s preaching. To my knowledge there are none out there. However, I am going to give you a person who can send along most of the messages that have been featured on the Barnabas Blog in the last two weeks and you can order them on CD.

None of Brother Harrell’s preaching would have made it out of Bridge City as we have come to know and appreciate if it weren’t for the assistance he has of some very good audio support folks. I think Tom (sorry I don’t know a last name) is responsible for the sound; another man is responsible for Powerpoint and Paula Thompson has been doing the tape/CD ministry for a long time. I am not sure when she started but I do know that she was taking care of it in the early ‘90’s maybe even longer. You can reach her at the church at 409-735-5844. She can send along requests that you have or put you on a subscription list and you will receive CD’s in the mail on a regular basis.

I have had a bit of a dilemma in coming down to these last two slots. I actually had three choices for this spot at Number 2. Oh Consistency, Thou Art a Jewel won out after a phone conversation I had earlier in the week with Brother Harrell. The other two choices that I had were “A Loaf of Bread and A Flagon of Wine,” and “The One-Hundred and Fifty-Six Mile Race.” I would recommend both of these to you to listen to at some point. 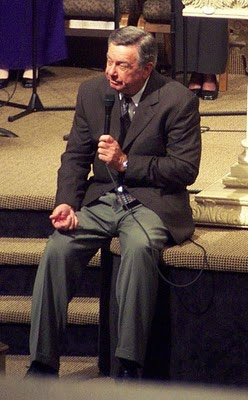 Over the years, this sermon is one that Brother Harrell has repeated perhaps more than any other. However, when you are logging in 90 or more times to preach per year out of 156 opportunities, even if he makes it around to preach it once every other year that is only once every 312 opportunities. It is a message that we need to hear much more than once every other year. This sermon is more than just a sermon Brother Harrell has demonstrated this with his life. When your life is consistent, it is easy to preach something of this nature.

Brother Harrell took his text from Matthew 25:21 where the phrase is found that you have been faithful over a few things. This is the way that we will get to heaven by being faithful over a few things, not doing great things, just being a responsible person. Shove off the patterns of inconsistency in life and look forward to hearing the voice of the Lord saying, “Well done thou good and faithful servant.

Jehu was a man who was anointed to be the king of Israel. He immediately set about to making proper reforms. He brought a brief revival of reform but because he was not consistent it was short-lived. Consistency would have brought much to the soul of Israel if Jehu would have done what he was called to do. 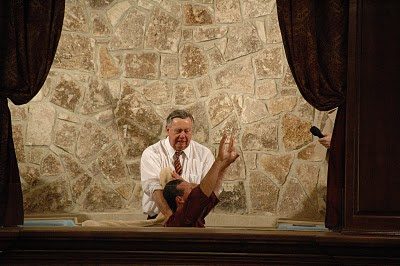 What many people do not realize is that the everyday mundane routines of life are actually creating a sense of stability in the lives of many that are associated with us. I can remember well what Brother Harrell told me one time. He said, “When those folks walk in that church in Dothan every Sunday and see you and Brother Patterson sitting on that platform and preaching the Word, it very well could be the only consistent thing in their lives. You need to be consistent amidst all of the ups and downs that people have to deal with. Job pressures, financial setbacks, and all the other stresses of life will wilt them down and they need to see a pastor who just keeps on doing the same thing over and over. That is how you build a church. It’s going to take your whole life to build that church!” This is wise advice not just for me but for a host of other ministers out there.

He concluded the message with this thought: The last thing the world needs is people who are not consistent in their lives and in their profession. One of the things the church is here for is to be the salt of the earth and light of the world. He said that numerous people who are totally backslid tell him how worried they were that one day when they decided to get in a right place with God and their wouldn’t be an old-fashioned apostolic church for them to go to so they could get right. Even if those kinds of folks don’t come right now, they know that you are going to be here. Consistency, Thou Art a Jewel! They can drive down the road at night and they are thankful that the lights are on and someone is inside being consistent in the apostolic doctrine and lifestyle despite it being under great challenges in our day.

Brother Harrell said when he was growing up in Lake Charles that he wasn’t right with God. He would tell the boys in the car “Don’t go down 6th Street tonight.” He said he never did tell them why but on Friday nights, the First Pentecostal Church of Lake Charles, Louisiana was having church. He said that every time he went by there in that condition, it was like a dagger plunged in his heart. Even though he wasn’t right with God, he knew that he ought to be there with them. That is why we have to be consistent is because there are a lot of folks out there who deep down in their heart know this is the right way and one of these days when they make it back, we don’t need to have changed a bit!

Quotes from the sermon:

“Pastors have it when they labor in rocky soil. It reveals itself when employees show up on time, roll up their sleeves and commit themselves to doing their job instead of watching the clock.”

“Diligence is the brother of consistency. Dependability is its partner. Discipline is its role model.” 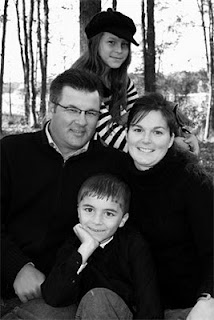 Murry Ray has dropped me another e-mail that I thought would be a good part of this blog post. It is as follows:

I noticed that several people have remarked about certain phrases Bro. Harrell has used over the years. I realize you have probably heard some of these but I thought you might be interested in them anyway.

Never ask his opinion if you can't handle an honest answer. I was getting ready to buy a motor home once. I felt a little uneasy about it so I called him to get some advice. I was on my way to sign the papers when I finally got in touch with him. He said, "Oh, Murry. You have called the wrong guy to ask about a motor home! You might as well stop on your way home and get a loaf of bread and a large jar of mayonnaise. When you get a chance you need to slather the miracle whip on both pieces of bread and slap the bread on each side of that motor home because you are going to be eating it for a long time!" I never bought a motor home and haven't even considered one since!

Coming tomorrow is the greatest sermon that I think Brother Harrell has ever preached.

Juan said…
Bro Harrelson...
Have really enjoyed these post about Bro Harrell...
First time I heard him was at a Texas Men's Conference in Lufkin, Texas... My thoughts were my goodness that man knows how to handle the word of God!
Today I found a sermon that Bro. Harrell preached called "Long ropes need strong stakes" it can be heard at http://itunes.apple.com/us/podcast/apostolic-classics/id271434219
5:55 PM

Something else I've noticed in his familiar phrases: some of, if not most, of his most awesome sermons come right after he says "I dont know how much preaching I'll do.." or " we're just gonna' drive around town tonight..."

Well when you're "driving around town," with Brother Harrell behind the pulpit, you'd better buckle up because you're in store for an incredible message.
2:05 AM

Anonymous said…
So much I want to say. My pastor is just fabulous! And when I was reading the favorite quotes that Murry posted, I can hear Bro Harrell saying each one. But "Awesome"....you have to hear Bro Harrell say that word. "That's AWESOME!! Utterly AWESOME!"
Thank you for the blogs!! They have been 'utterly awesome!'
11:03 AM