Ministry and medicine have a lot in common (although I am not sure if the faith healers would agree with me or not). Sometime ago I was involved in a procedure that was blissfully incredible. A patient had been having problems with extreme weight loss, nausea and vomiting, general malaise, and a lack of appetite. After the attending physician had determined through a CT scan that the patient did not have an underlying cancer diagnosis, it was determined that they possibly had some called mesenteric ischemia which is a fancy medical doo-dad term that basically says “the gut is not getting any blood.” So off we went in the chase.

During the procedure, my job was to keep the patient asleep with hefty doses of IV narcotics and monitor their cardiac status as we attempted to find the problem. As the procedure progressed, four sets of eyes in the interventional radiology lab saw the problem. A small but very vital mesenteric artery was about 90% closed off and our job was to fish a wire across this lesion and put a titanium stent in place to hold it open. Very tedious and very dangerous would probably sum up the whole affair. However, in the end a warm fuzzy story developed with the all of the symptoms subsiding and the patient returned to quite a productive lifestyle.

But another day came. The same four sets of eyes, the same drugs, the same monitors, the same equipment, everything was the same and luckily in the end the same outcome. On this day another patient presented with similar symptoms. There was a high grade blockage that created a tremendous insult in the blood flow leading to terrible and painful symptoms for the patient. We managed to snake a “road-runner” wire across the lesion. Then that was followed with a catheter which was followed by another stiffer wire which helped us to advance a stent to prop open the blockage. But the tricky part about this sort of thing is that when the balloon containing the stent is opened up, the blockage is can be like shards of glass.

On this day, we had the same expectations but a much different outcome. When the balloon was about 80% opened and the stent was sealing against the wall of the artery, the artery dissected. The patient’s blood pressure suddenly went from 120-130/60-70’s to the systolic number (the one of top) being 60-70. The heart rate went from the 70’s to the 140’s almost immediately. In addition, under continuous X-ray we could see the artery “hosing” blood. This is life in the real world, much unlike the fake stuff you may have seen on TV. We did manage to get a stent-graft in place and after about 45 minutes the situation righted itself and everything returned to a somewhat normal state.

The important implication of this little story that I have just told you is that there are unreasonable expectations that one will have to bear in shepherding the flock. Just as there are responsibilities that a shepherd has to bear there are also crosses that he will have to bear also. In the last post, I mentioned the cross of fighting parasites. The second cross is that of having to live up to unreasonable expectations. Every shepherd at some point in his life (hopefully sooner than later) he will have to say, “I am not Superman! I cannot be everywhere at once! I cannot read minds! I am just a man whom God has called to try and help.”

Robert Edmondson wrote in It Only Hurts on Monday: Why Pastors Quit and What Churches Can Do About It they following:

The expectations placed on a pastor and his family by themselves and by others combine to make a cumulative list of musts that is often unbiblical and unreasonable. This is because the expectations are both numerous and contradictory.

Every person in a given congregation comes to the church with differing backgrounds. Some are old. Some are young. Some come from rural churches where they were involved in almost every facet of their church’s life. Others come from large suburban churches where there was a program for everything. Some come from no church background and therefore don’t know what to expect, bless them! The pastor has his own background and his own heroes. All this means that there are a hundred or more different lists of expectations of the pastor. Sooner or later, the pastor finds out about all of them. Since his professional well-being rests on the good will of the people he serves, he does his best to meet this cumulative list of expectations.

These unrealistic expectations escalate until the shepherd finds breathless and exhausted or more often than not, sheep abuse occurs and the sheep have to endure the frustrations of a wearied shepherd. Sheep get bruised and the devil loves to take advantage of this by encouraging discord or the sheep simply dying. 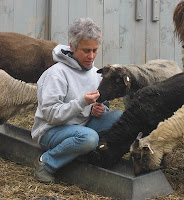 The shepherd in trying to keep up with this cross, he finds a frenzied pace of life that is destructive at best. Almost imperceptibly the harder they work to keep up with the pace the more obligations and responsibilities are sent in their direction. In the long haul of ministry, prayer ceases, inspiration for preaching dies, kindness disappears, joy erodes, dreams die, and visions languish and it is not long before the shepherd becomes a shell of a man that simply longs for the finish line to appear somewhere on the horizon.

As a reader, you are probably thinking that this is a reality in shepherding a flock but what must be done to relieve the situation. I have discovered a few things that helps when you are faced with unreasonable expectations both those that are internal and those that are external.

1. Pray! Prayer is so often neglected in the work of ministry that I am appalled at how little of it that I really do. Now having come to that understanding, I can also say without reservation, I am appalled at how much you don’t pray either! Prayer is a life-source of ministry. How often are we driven to our knees under duress when the trials and difficulties come but ease up when things are “normal.”

2. The Word! How often is the Word neglected when we only use it for preaching, for counseling, and for encouragement? The Word must have a forefront in our lives. I have made a conscious effort for a little over a year to “own” 1st John. The treasures that have been unearthed from both devotional and critical study have been a force in my life. Periodically, we out to retreat from life (like a whole day) with just a Bible, a legal pad, and a good pen. Wesley Duewel in a book, Let God Guide You Daily, described what it was like for him when he did this: I have at times read as many as fifty chapters from God’s Word before I was completely alone with God. But on some of those occasions I received such unexpected guidance that my life has been greatly benefited.”

3. Understand the “seasons.” There are seasons that every church and life will go through. The devil uses these “seasons” sometimes to our own spiritual detriment by allowing a creeping frustration of unrealistic expectations to develop. While God may be using the season to teach us an important lesson of life, it is missed because we do not understand the seasons. I have discovered that this is where prayer can be crucial because God can literally open up an understanding to help you to “see” what is going on in your venue.

I shall continue this series next week. . . thanks for stopping by to read. . . .