- April 01, 2006
I first heard this story in the spring of 1985. In fact it was the opening lecture in my first nursing class. After twenty years, I still think of how important the simple things are. May you think of the simple things too! 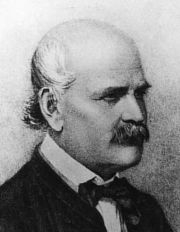 The year was 1818 and Ignaz Phillip Semmelweis (pronounced ZEMMELVISE) was born into a world of dying women. The most magnificent hospitals of the day were losing one out of every six young mothers to a mysterious scourge commonly referred to as “childbed fever.” For twenty-six years this disease would continue to incapacitate and destroy young mothers in the throes of labor and at times even destroying the lives of the newborn children.

In 1844, at twenty-six years of age, the now Dr. Semmelweis, decided that there was a connection between the mothers’ deaths and the practice of physicians. A doctor’s daily routine began in the labs where autopsies were performed. It was in the process of the autopsies that physicians would perfect their surgical techniques and their knowledge of anatomy and physiology. Yet there was one alarming practice that occurred in this setting.

Many of these practitioners would leave directly the lab and go from the place of the dying and move to the place of the living. These men would never pause to wash their hands and something from the diseased dead would be transmitted to those battling into the gates of life. In fact the often ignorant and trusting public would look at a physician with a blood-stained lab coat and would see this as a sign of his “success,” a morbid badge of honor. The more soiled his lab coat was, the better physician that he was considered to be. (If you find this hard to believe, you owe it to yourself to read up on the history of medicine in the and abroad. Semmelweis practiced in .)

So young Semmelweis was the first man in history to associate this type of practice with resulting infection and death. So he began to wash his hands in a chlorine solution when he left the lab to practice medicine. After eleven years and the delivery of 8,537 babies, he lost only 184 mothers–about one in fifty. This was in the days before C-sections which in itself can preserve the baby in instances of breach presentation, cord compression, placenta previa, and other anomalies. Semmelweis’ average was considered very good.

With this concise record keeping on his part, he began to lecture, debate, even argue with his colleagues, and where he could, he implemented mandatory hand-washing among those whom were his subordinates and interns under his direction. He fought with such vigor and strength that he was accused of madness. He struggled to get doctors to wear clean clothes in deliveries and attempted to get clean wards in which to practice medicine. Still these resistant colleagues of his would refuse to comply with his standards. The standards of Semmelweis were ridiculous and went against the current thoughts of the day. 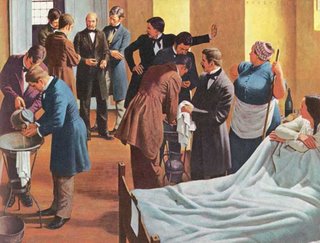 He once argued, “Puerperal fever (childbed fever) is caused by decomposed material, conveyed to a wound. I have shown how it can be prevented. I have proved all that I have said. But while we talk, talk, talk, gentlemen, woman are dying. I am not asking anything world shaking. I am merely asking you only to wash. . . For God’s sake, wash your hands.”

But in his struggle, practically no one believed him. Physicians and midwives had been delivering babies for years without washing and no crazy Hungarian was going to change them today or tomorrow. Semmelweis would die at the young age of 47, practically at the edge of insanity with his wash basins discarded and his peers laughing in his face. . . . and the death rattle of a thousand women ringing in his ears. But he refused to give up. He labored valiantly on. . . . in a seemingly losing battle. 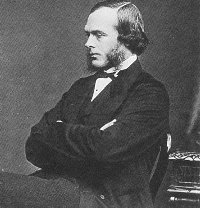 Years passed and the nineteenth century rolled around. Enter another young physician named Joseph Lister. He having come into contact with some of the records and journals of Semmelweis began to soak his surgical instruments in carbolic acid and the results were astonishing. What previously had been considered as risky and hazardous surgery now became routine. Interestingly enough the majority of physicians ridiculed and ostracized Lister also, but he too, plodded steadily on.

Today before you have a surgical procedure, the surgeon will stand outside of the operating room and “scrub” his hands with a Betadine scrub or Hibiclens soap for ten minutes before he even enters the room where the patient is. Just because the majority believe one thing does not necessarily mean that it is true. The beliefs of Semmelweis and Lister have both outlived them and contributed greatly to the world that we enjoy.

It is amazing that something as simple as handwashing would have such an impact on modern healthcare. It is a very simple thing for a healthcare worker to wash their hands to prevent the spread of germs. However, too often hospital staff will not wash their hands between patients. Because of this negligence, deadly, infectious microbes are spread about and patients become acutely ill.

So simple yet so crucial.

Anonymous said…
As always, you are incredible... Can I use this??

Anonymous said…
It's the simplest lesson in nursing yet every nurse I know it is the first thing they learn. Terrific post!
7:17 AM

Philip Harrelson said…
Craig, As always use what you want to and you don't even need to worry about giving credit. God Bless, PH
10:33 PM