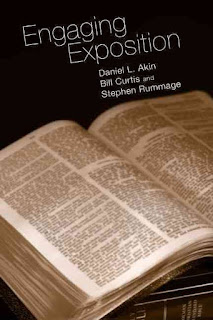 It is obvious from the flurry of writing that I am doing on the Barnabas Blog that you can tell it is the end of the year.  I generally try to put out a “Top Ten” list of books that I have read the previous year.  This year is a little different because I have read so many good books, helpful books, and changing-my-thinking books that it is hard to say which one was the best one.  I probably read too many books about preaching during the year but since it is what I do, I read in an effort to sharpen both mind and efforts in that category.  I mentioned to the church recently that when they get to heaven one of the jewels they will get in their crown will be from having to endure my preaching.  I hope it is not an endurance factor for them but one that encourages their spiritual growth.

This book, Engaging Exposition, by Daniel Akin, Bill Curtis, and Stephen Rummage will be very difficult to unseat as one of the best I have read and interacted with this year.  It was given to me by one of our lay ministers, Charlie Joyner, a couple of months ago.  It has an incredible range about it.  It speaks to the rigorous academic side that preaching should be subjected to—areas like hermeneutics, the inspiration of Scripture, the different genres of Scripture, and how to identify the main idea of a passage of Scripture.  It also has a section that deals with the nuts and bolts of building a sermon.  Even though I have been preaching for almost 25 years, this kind of practical advice is always good for me.  The last section of the book speaks to the actual delivery of the sermon itself.


Bill Curtis wrote the first third of the book and speaks to the matter of hermeneutics.  He notes that bad hermeneutics lead to bad sermons.  He detects several classic mistakes that preachers make during the sermon prep time.  They can go to the Scripture looking for something new to bring out.  They can try to find Scriptures to prop up their ideas and pet doctrines.  They can work so hard to be relevant that they misuse the Bible.  All those mistakes lead to people who cannot make hide nor hair of what the Bible is really saying.  I also respected the fact that Curtis gets into the inspiration and inerrancy of Scripture and how crucial it is for a preacher to resolve this matter in his mind or get out of preaching.  There is a subtle trend in some seminary educators to want to demean the inspiration, inerrancy, and authority of Scripture. 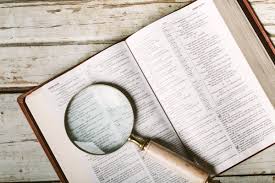 The second section of the book is written by Daniel Akin.  He spends his time helping you to pinpoint the main idea of the text you are preaching.  Two chapters are geared toward exposition regarding the structure of the message and the development of the message.  One of the goals of expository preaching is to:  1) read the text, 2) explain the text, and 3) apply the text.  While Akin does not necessarily write it out that way, the subject matter that he deals with is very good at helping you to do exactly that.  Additionally, Akin spends time writing about the introduction and the conclusion of the message.  He addresses preaching on special occasions and then has a sort of written Q&A about the development of biblical messages.

The last section of the book is written by Stephen Rummage.  Rummage wrote an incredible book back in 2002 about planning your preaching and it was one of the most helpful books that I read very early on when I was trying to get my footing in expository preaching.  He goes into the practical areas of preaching—delivery, speech patterns, word pronunciation, eye-contact, and some simple things that as preachers we may forget if we have been preaching for a while.  It is something that new ministers should be cognizant of as well.  His last chapter may be worth the price of the book because Rummage writes about the preacher’s personal life and his public behavior.

This book is heavily footnoted and for the diligent reader, there are some other excellent books that can be attained if you will make them work for you.  As I have gotten older, I have greatly valued books that were footnoted because it helps me to track down sources and strengthen my credibility as a preacher.  Don’t let the price of this book sway you!  It is well worth what you will pay for it.  In fact, it won the Book of the Year Award by Preaching Magazine in 2011.