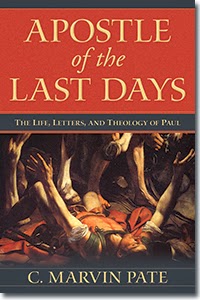 Several weeks ago, I was sent a book from the Kregel Academic Division by C. Marvin Pate, Apostle of the Last Days—The Life, Letters, and Theology of Paul.  The arrival of this book coincided with a study that I had been doing in Acts and it came at just about the time I was going through the conversion of Saul of Tarsus.  While there was some good material about the basic history of Paul, the whole subject matter of the book was concerned with the eschatological stances that Paul placed in his epistles.  One particular thing I appreciated about Pate’s subject matter was his response to some of the critics who have attempted to question the authenticity of the Pauline letters.  I have increasingly noticed in the last five years or so that there is an increasing tide among those who once believed in the Bible to begin to pick at its edges and question the authority of the Word of God.  Pate meets some of that response briefly in the introduction as he moves toward a conservative approach to the Bible.  You will benefit from what he has written and how he has responded (p. 13).

Another point that Pate builds on is the aspect that Paul’s teaching in his epistles came primarily as a response to the opposition that came against him in the 1st century as the apostolic church was developing.  I am certainly one in belief that most American pastors have a tendency to shrink back from theological conflict of any form mustering the excuse that they want to operate out of basis of “love.”  However, we must again realize that in Acts 20 as Paul was leaving the Ephesian elders that he expressly told them to be on the lookout for the wolves that would come along and make an effort to subvert Scripture.  Pate makes reference to the antagonists that Paul came against (p. 20).

I found another helpful matter in this book because there are multiple tables, charts, and diagrams that the author incorporated to help the reader to “see” a clearer picture of the subject.  Additionally, I began to appreciate greatly an author who is willing to put footnotes that are exceptionally documented so that if one is a motivated reader and student, he will have the ability to ferret out the sources and content of what has been written.

Brother Jolley used to be notorious for taking a book an underlining a sentence and saying, “This sentence right here (as he pointed it out) is worth the price of the book!”  Or there were other times that he would say, “The price of the book is worth this chapter!”  (He told me that Alexander Whyte’s OT/NT Characters of the Bible was worth the chapter on Ahithophel.)  For me the best chapter in this book was the one where Pate writes about Paul being an “apocalyptic seer” and he summarizes every one of the epistles and how that his conversion/call to ministry had its roots in the coming events of eschatology.

One more additional matter needs to be given also.  I found that Pate did a decent job of interpreting the matter of the operation of the gifts of the Spirit when he writes about 1 and 2 Corinthians.  It would appear that he is not a cessationist when he notes that prophecy and tongues will be in full operation until the rapture takes place (p. 139).  Furthermore he points to the texts in Jeremiah 31, Ezekiel 36, and Joel 2 and notes that just as most apostolic believers will give an interpretation.  He notes that aspects of the New Covenant have not been totally fulfilled but the outpouring of the Spirit in Acts 2 began the age but it has not culminated and will not be until after the rapture.

I would recommend this book as one to add to your library with the understanding that it is academic in nature and will not be a quick read if you are looking for inspirational reading.