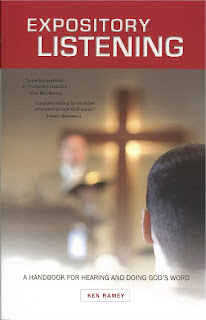 What struck my thoughts on this idea of listening is a book that I am currently reading and a sermon that I downloaded by Pastor Anthony Mangun. The book I am reading is called “Expository Listening” by Ken Ramey who noted the wealth of books on preaching and homiletics and that he had never noticed a book about listening to sermons.

The podcast that I heard of Brother Mangun was a series that he was starting at the church he pastors about the Fruit of the Spirit. He began with Matthew 13 in the parable of the soils and before he really got into the message he mentioned that there would be people who didn’t hear a word he would say during the message. There would be others who would listen and have some emotional or intellectual reaction that would be gone by the middle of the day on Monday. However, he also said that there were also hearers who had hearts that was like the good ground that Jesus spoke of that would have true spiritual growth because they had been willing to pull in the Word into their heart and mind and let it help them make adjustments in the course of their spiritual walk. Basically what he was saying that your response to preaching is an affair of your heart! Wherever your heart is will greatly depend on your response to the Word.

I will never forget my junior year at Texas Bible College when it struck me that first week that I needed to be more proactive with my listening. I was sitting next to Paul Jacks and Bryan Aaron in a chapel service and I looked over at them and saw varying degrees of dazed lethargy. They were not quite to the point of nodding off and drooling but they were pretty close to it. Glazed eyes that had a faraway look keyed me in to the fact that both of them were present physically but not mentally. But I have to drop my rocks on the ground for I too had been in the dazed zone chapel before too.

Anytime that you get a bunch of rookie preachers who are in their early twenties and know everything about the Bible (if you don’t believe it just ask them) you have a recipe for a dazed-glazed preaching event to take place. I can well remember some of the antics of preaching about the identity of Melchizedek, forty-nine aspects of praise, and climbing into the third heaven using Jacob’s ladder. In between all of that were the nifty little poems, stories, and personal experiences that were pulled together in those “sermons.”

On the other hand, I heard some jacked-up masterpieces in that chapel at Texas Bible College. Some of them I have never forgotten despite the fact that this month is twenty-years ago that I walked into that place (I was welcomed to Houston by having my car stolen and stripped the second night I was there but that is for another day). I will never forget Ken Gurley’s opening chapel when he preached “The Beauty of the Beast.” Phil White’s “Overloaded with Goats” and “The Eyes of the Bride.” O. R. Fauss who preached “The Peril of Not Being Anointed” along with Mike Chance’s three shot Accent weekend with every sermon being on prayer. Never will I forget Brother Griffin’s series on “Blessed Assurance” and the series on the Sermon on the Mount. Two very troubling sermons came from Brother Hunt and Brother Griffin; “Concerned with Gourds” and “Despise Not the Day of Small Things.” Nor will I ever forget Brother Ensey preaching “The Ghost of Ephraim” and “Loving Much.” 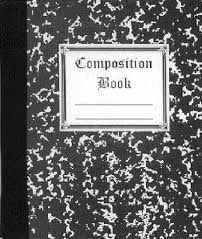 However, it was not long before I begin to pick up things from even the rookies that helped me in my spiritual growth and it all had to do with how I listened to sermons. This all came about because of my purchase of one of those cheap little marble notebooks from Office Depot and good pen. Now twenty years, fifty notebooks (that I still have), and innumerable dead pens (that I don’t have), I have benefited from going back and reading through some of the things that struck me during the sermons I have listened to.

There are those who disagree with people taking notes while someone is preaching because they argue that it takes away from the listener’s ability to pay attention to the preacher. I strongly disagree with that, in fact I believe that it actually heightens the ability of the listener to pay attention and on Tuesday of Thursday one can still be mulling over some of the things that were said. I have to carefully demonstrate the difference between note-taking that you would take in listening to a sermon versus what you would do with Anatomy and Physiology in a college classroom. Some notes are very detailed and others hit the high points—hitting the high points and jotting down the Scripture references helps us to listen. I also might add that it goes a long way in helping a bad sermon move a little quicker.

Thomas Watson—When we come to the Word preached, we come to a matter of the highest importance; therefore we should stir up ourselves and hear with the greatest devotion. (From Heaven Taken By Storm) 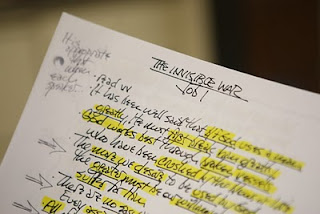 If you begin to take notes, you will suddenly figure out who are the real Biblical preachers and those who are not. You may ask, “How so?” I want to give you a few areas to consider.

Keeping track with notes will determine the biblical content of the message. The cry of one of the minor prophets was that the people were being destroyed because of a lack of knowledge (Hosea 4:6). If you follow along and really listen the acid testing of biblical preaching is that it will contain the Word; not jokes, not stories,

Keeping track with notes will determine the spiritual content of the message. When I say spiritual content, I am meaning those things that apply to the spiritual disciplines of our lives—prayer, fasting, corporate worship, and church attendance. These are all spiritual practices that gives leanings toward growing spiritually. The world sees a lot of “Christians” who are not much different in their activities than those who are in the world—if we go to all the same places, do the same things, pursue the same things, etc. that the unsaved are pursuing. . . then are we really converted. . . have we really been saved?