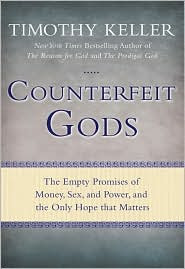 One of the noticeable differences in my reading habits over the last three or four years has been the content of religious materials that I now read. Years ago, I spent a lot of time reading Max Lucado, Max Lucado, and Max Lucado. Max was good for my inspirational quirks years ago but after the 45th book has dropped out of the chute and landed on the bookshelf, I discovered that Max was apparently saying the same things but under a different cover. I gained a bit of inspiration but little education. All-in-all, it was good because his writings caused me to reach for things on the next shelf.

Higher up on the proverbial shelf is a writer that I have grown to enjoy reading simply because of the “thinkabilty” factor involved. That writer is Timothy Keller and his newest book fills the bill. He has written a new book entitled “Counterfeit Gods—The Empty Promises of Money, Sex, and Power, and the Only Hope That Matters.”

The introduction kicks off with a provocative thought concerning the Idol Factory which is the heart of a man. He takes a quote from a very liberal thinker Friedrich Nietzsche, There are more idols in the world than there are realities. Keller then recounts multiple documented suicides of Fortune 500 bankers and investment managers who could not handle the collapses of Freddie Mac, Bear Stearns, and other financial firms. At the heart of their demise was the idea that money had become their sole savior and sustenance for life. However, inanimate things can never fill the void of the spiritual yaw in a man’s soul. The only thing that will ultimately fulfill and provide a sense of contentment in a man is a transforming and redemptive relationship with God.

Keller writes, “If we look to some created thing to give us the meaning, hope, and happiness that only God himself can give, it will eventually fail to deliver and break our hearts.” This single sentence explains the maddening pursuit of the very fragile American dream. The American dream is no longer what it was 30 years ago (or even five years ago for that matter) simply because the system has now been broken by the insatiable demands of greed, self-proclaimed “rights” and the refusal to embrace delayed gratification. Bigger is not necessarily better but bigger does warrant and feed an out of control idol factory.

Later in the chapter, Keller explains, “Sometimes God seems to be killing us when he is actually saving us. Here he was turning Abraham into a great man—but on the outside it looked like God was being cruel. To follow God in such circumstances seems to some to be “blind faith,” but actually it is vigorous, grateful faith. The Bible is filled with stories of figures such as Joseph, Moses, and David in which God seemed to have abandoned them, but later it is revealed that he was dealing with destructive idols in their lives and that could have only come to pass through their experience with difficulty.”

The Chapter titles are:

Introduction: The Idol Factory
1-All You’ve Ever Wanted
2-Love Is Not All You Need
3-Money Changes Everything
4-The Seduction of Success
5-The Power and the Glory
6-The Hidden Idols in Our Lives
7-The End of Counterfeit Gods
Epilogue: Finding and Replacing Your Idols

There is a very detailed “Notes” section along with a “Bibliography” that runs for 30 pages which is loaded with some very good fodder. Worthy of your time and be sure that you read with a red pen in one hand and an open notebook available. . . that is how good this book is.

Unknown said…
Thanks for the book recommendation! I believe i will purchase this one.