A Tale of Three Kings 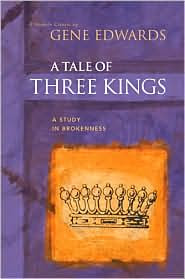 I was tired, weary, and defeated just to sum up a few of the massive dark feelings of the soul that night. To that point in my life, I am not sure that I had ever faced the dilemma quite like the one I was now staring down. My heart was dark and my feelings were very spiritually unhealthy to say the least. It would have been very easy to give in to defeat, pack up the tent and go in another direction with my life.

Looking back it was almost thirteen years ago on a late Wednesday night in October 1996. I had come from home from mid-week prayer and Bible study and it seemed as if the world of darkness was doing everything possible to choke the life out of me. What was so strange is that in January 1996, a very distinct directive from the Lord had told me that I would be on the current assignment for four more years. I expected a lot of great things but instead I was grappling with a storm that threatened to overpower me. A blinding and quite unforeseen trial had broadsided me and what little Christian character I had was being eroded by a lot of very carnal emotions to say the least.

I can still remember almost the exact time on that memorable Wednesday night as sometime around 10:35 or so. The house was finally quiet as Teresa and I had gotten the kids down for the night and she was in the back of the house and I was in my study in the front. I leaned back in my chair and propped my feet up on my desk and begin to encourage a dark and brooding stream of emotions. In retrospect and hopefully with an eye toward a little more spiritual maturity, I can see now that it was a shaping process of the soul that God was using to my own benefit. Spiritual growth is very necessary in all of our lives but most of the time it is very painful because it involves a pruning of the soul. But how that pruning is so conducive to greater fruitfulness!

Somehow my eyes flitted to the top of the bookshelf. Tucked in between all of the other inspirational books written by Gordon MacDonald, Charles Swindoll, Max Lucado, and a few others, I spied a little paperback that I had owned for at least 3 years. Numerous preachers had told me that I had to read Gene Edwards’ A Tale of Three Kings. I took half of their advice and bought it but never read it. In fact, as I think about it now, I can think of at least ten good men who told me that I needed to read this book. I didn’t ignore their advice it just wasn’t in God’s timing for me to read the book just yet. No doubt when I purchased the book, God knew there would come a time that I would need to read this book. I am of the opinion that this was one of the types of books that Paul encouraged Timothy to bring to him before winter (2 Tim. 4:13).

So at 10:35, I picked up that book and it mesmerized me until shortly after midnight. The impact of this little book (a little over 80 pages) has remained with me to this day. For those of you who have not read it, I won’t give you any details that will spoil it. For those who have read it before, you might want to pick it back up again! It is a tale for the ages because it exposes the fact that within every one of us is either a mad king who worships himself or there is a broken king who worships God. . . . . . and only the pain of trials can reveal what kind of man that we are. . . .

Anonymous said…
I will take your advice & read it once more & be blessed again.
6:31 AM

Timothy C. Mitchell said…
I read that book many, many years ago and it was an eye-opener. I have this and another book, The Bait of Satan by John Bevere in the church library and have recommemded them over and over when counseling people. These are a must read for everyone who will survive the self-pity pit and get over personal bitterness when one feels injured by someone in authority over them.

mjk said…
Ah, yes... I too have read, re-read and recommended this book to others. It's stated purpose has little to do with its real impact and the way the Spirit illuminates the written word. Oh, for more of the Spirit of David! We say we have it, we sing that we have it, but when we actually do - we can be assured of the Master's smile of approval. What was it He said of David? "A man after Mine own heart." Hmmmm...
2:46 PM