Book Recommendation -- Jeffrey Toobin, The Nine—Inside the Secret World of the Supreme Court

- April 08, 2009
I am going to take a break for a day or two from the discipline of study series although I have several more men lined up who are going to share some of the things they are doing. I should have blogged this book review long before now. However, maybe coming at you a bit later will save you a few bucks by getting a used copy. 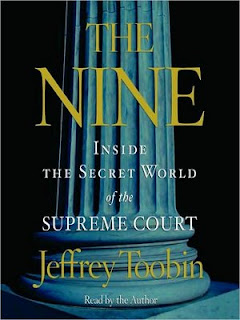 Jeffrey Toobin is an author that I ended up finding because I judged a book by its cover. I went into Barnes & Noble and picked up his latest book, The Nine—Inside the Secret World of the Supreme Court, shortly after it was published. My curiosity about this book stemmed from some reading that I did on Associate Justice Clarence Thomas a few years ago. Toobin, even though a left-leaning writer, put together an outstanding book concerning the U.S. Supreme Court.

The book starts out with a very brief but provocative description of the steps of the new Supreme Court building. For those who are willing to contemplate the steps and where they led, it has the markings for a great illustration in a sermon along the way. In addition, Toobin explains the health limitations of William Rehnquist and finally the death and funeral of the Chief Justice.

As you read the book, you will obviously become aware that Toobin had access to a lot of insiders who were willing to share with him the routines of the Court. He also explores some of the tensions that occur between the associate justices and their law clerks. Toobin does a fine job also of analyzing each of the justices and their daily habits which I found to be very interesting. Stephen Breyer is described as a man full of life and enthusiasm who still cannot get over the fact the he is an associate justice. David Souter is characterized as a man who would have been better suited for the 18th century. He is very resistant to technological advances and relies solely on his fountain pen. He will not have a cell-phone, fax, answering machine, or e-mail and he is quite comfortable living in this way. The tricky characters that Toobin describes are Clarence Thomas and Antonin Scalia.

The most powerful concept that I took away from this book was the crucial importance of the dissenting voice. Where there isn’t a dissenting voice of reason, anarchy has the capacity to capsize the whole institution. One starts noting the power of dissent when the justices and law clerks attempt to persuade and argue for their points. Several important cases does Toobin go into. He describes the “hanging chads” of the 2000 election between George Bush and Al Gore.

Another valuable feature about this book is the notes and bibliography at the end of the book. It is filled with websites, law journals, and books that if you desire to do so, an amazing path of reading about the Supreme Court can be discovered.

This book is definitely worth your time. . .

Just in case you might be interested, I am listing some links that I found in this book that were very interesting.