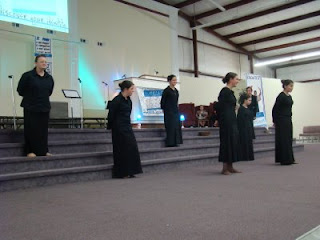 Funny how those guys who thought all the coughing and gas passing was funny at midnight last night don’t think it is too funny at 0730 this morning. These clowns did not want to go to bed last night and now they don’t want to get up this morning. They have it all backwards. Confused about when to get in and when to get out. The thing that they have to remember about sleep is that you need it and you need to get all you can when you can. All the pictures are at this link.

The morning started off with a bang with my good buddy, Pastor Perry Wells from Vincent, Alabama. He told this bunch of kids this morning that things went pretty smoothly last night except for at Midnight Madness there were about 1001 Skittles lying around that needed to have something done with them. So before breakfast could be started, they all had to be picked up. So we got the Skittles taken care of and scooted off to breakfast.

The Dothan gang pretty stays together for most of the days as you will notice from all the pictures, today wasn’t any different. They were all together at breakfast except for one. He managed to slip away from me although this was the first time he had managed to do so. Jacob Puckett went missing in action. So I went off in search for him. I looked in the concession stand, no Jacob. I looked on the front steps, no Jacob. So I decided to go into the auditorium and see if he was there. When I opened up the doors, I was being serenaded by a drum solo although I could not see who was playing. However as I turned the corner and looked all the way across to the platform, Jacob was playing the drums. He was apparently having a time with it. So I went over and told him that if we did not get breakfast then we would miss it for the rest of the day. So we headed back toward the café and had a hearty breakfast.

Our first session of the day involved a forum of sorts. Numerous questions were asked to Sister Vanderford (forgive me for not knowing her first name), Jeremy Sherrill, Shaun Meeks, Kelly Martincic, David Goodwin, and myself. Good questions and good advice came from all around. Hopefully some of it connected with the kids.

Then Brother Kelly Martincic, one of the sectional youth directors, preached “Your Father Has the Final Word” from Genesis 35. Again, it was a good message that challenged the youth to understand that God has much control in the circumstances of our lives and it will work toward His plan if we will just be faithful to what God desires. 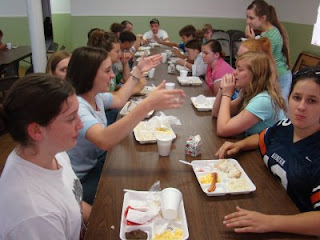 After this session, we were turned loose for lunch with recreation to follow. Lunch today consisted of the other end of the box of the chicken fingers. In one end, I think they pack chicken fingers and in the other end they pack what is left of the chicken, such as toes, lips, ears, and such and put it into a handy little patty. That is what we had for lunch, chicken patty sandwiches. Teresa and I ate with Brother Wells who again rivaled us with some famous stories from Vincent, Alabama. I think that toe-to-toe Brother Wells could give the late Jerry Clower a run for his money.

Brother Wells told his that his grandmother would sit out on her front porch and rock in a rocking chair, read her Bible, and dip snuff all at the same time. He assured us that she could do this because she was Baptist! This was greatly amusing to me when he was telling us about it. He told us that one day his grandmother intended to spit a big wad of snuff out in the yard and then toss her Bible on the small little cot next her rocking chair on the porch. The cot was there because the “old country folk” would sometimes take a nap on the porch. Anyway, instead of getting the snuff in the yard, she got a little confused. She spit a big wad of juice on her nice white sheets on the cot and tossed her Bible out into the yard!

He also told us that he had traced his family tree all the way back to the mid 1700’s and the Wells had come out of South Carolina with some very strong Irish and German stock. They were all army officers and such but he said that the tried to trace his wife’s family back (the Reynolds) to 1946. They could not find anything beyond a jail break in Clanton, Alabama! All of this is hugely funny to me. At breakfast he had rivaled me with great stories about how to make sauerkraut. He went into much (too much) detail about how it was done. I always thought that sauerkraut made a bad hotdog worse. But I have now come to find out that sauerkraut is actually very good with ribs that you BBQ with. I doubt I shall try it in the near or distant future but at least I know how to make sauerkraut now, which I did not last week.

The afternoons were full of hanging out and the boys spent a lot of time on the basketball court. I managed to slip off on my bicycle for about a 17.5 mile ride through the Pike Road community and found some valuable decompression time on the bike. Bikes are sort of like those broncs I am reading to the boys about at night in Dorm D, they can jerk the kinks out of your spirit. 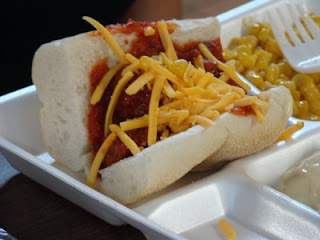 Supper was around 5:30 PM and when I got down there, all of our kids were settling down in front of meatball subs. It sort of stirred up that old camp song of something about a meatball being on top of spaghetti all covered with cheese and I lost my poor meatball when somebody sneezed.

Silent Praise was due to make their debut in singspiration but after some technical difficulties with the CD, they were unable to do so. They aren’t interested in doing it tomorrow night because they have the Pizza Party and no one wants to wear black to the party.

One thing I am discovering this year and it appears to get worse yearly is that there are some extremely messed up kids that come to our camps. The devil has done everything he can to wreck our society. Kids have little discipline in their home life and it plays over into all that we see at camp. Suffice it to say that we need an old-fashioned revival in America. Having said that, it makes me clearly more committed to our Dothan bunch and doing all that we can with them!

The service took off with a bang and the choir continued to roll it and Brother Linder ended up not getting to preach tonight. Seven kids got the Holy Ghost for the first time tonight. After an extended altar service, the kids were dismissed and told to return to the auditorium at 9:45 PM for Midnight Goofiness. I again retreated to the kitchen not desiring any excessive nerve jangling and had some leftover chicken. During that time, Brother Wells and I commenced again with our task of rectifying the societal problems at large. I think we are making some headway and if President Bush hears a peep out of our ideas, there is great potential in the both of us being whisked off to the White House.

Tonight in Dorm D, the giddiness of our bunch seems to be giving way to fatigue. Not much objections tonight to settling in. I read about 2 chapters from Mustang Man by that prophet L’Amour and it was again a resounding success.

Anonymous said…
Hello People, I was on a holiday for a month just passing by read this interesting post its great to see that every thing here is getting more lively...thanks a lot for these keep them coming....