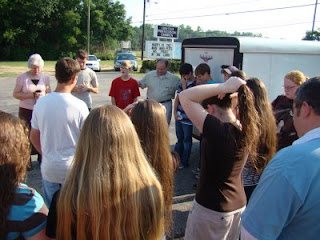 We arrived in Montgomery around 10 AM on Tuesday morning for the most part in pretty good condition. Everybody was in their usual excited state about getting into the dorm they were in last year but the boys group was too large to all get housed in Dorms A, B, and C, so we had to pack up all the stuff and move it to Dorm D. The only problem with this is the A/C. In the other dorms it is usually cold enough to “bust the bark” so to speak. But this year we have to make some adjustments and will have to fair in a little warmer climate to get all the boys in the same place. I am told the registration is somewhere around 165+ and it appears that we have a good crew this year.

We have a few newcomers this year. Christy, Morgan, and Nikki are the new girls. On the boys side we have Clay who has never stayed in the dorms without the close presence of his mother and also the Pucketts. Andrew and Jacob are with us from Atlanta. Jacob is a mile a minute to keep up with but he has spent much of the day with Brother David or myself.

Shortly after dumping all of the things in the dorm it was time for lunch. Some of those hearty soybean burgers from all appearances and taste! Along with chips and chocolate chip cookies we realized that we were in for a high-carb week.

After lunch was over with we all hustled over to the auditorium for a rally that was preached by Ryan Vanderford who is the Alabama District UPCI Youth Secretary. He preached a message about “The Power of a Discovered Identity.” He encouraged the youth to understand that there are two choices. Saul, who never really lived up to the intended identity, ended up flopping entirely at what God really had intended for him. On the other hand, there was Paul, who did live up to his discovered identity of what God really wanted. As young men and women the choice of seeking out the right things of life are incredibly important. 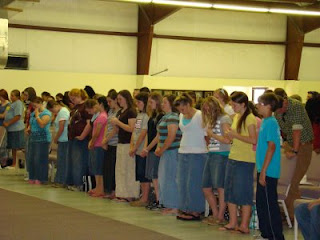 This message was ended with a good time of prayer and a challenge. The challenge was issued to the kids and they were encouraged to sign their name on a banner that will be on the front of the pulpit all week during the camp. I was proud of the Dothan bunch who took up 22 seats on the front row. The guys and gals are stretched across the whole front (as you will see on the Flickr photostream).

The altar service ended with the introduction of the illustrious pastor of Vincent, Alabama, Perry Wells. He immediately called for all knives and pistols to be coughed up and if they were not voluntarily handed over they would be forcefully taken! Furthermore, Brother Wells is about to start a cell phone company and anyone who is caught “texting” during the service is going to contribute their phone to his company and the phones will be leased out to excited customers who are in the Vincent, Alabama area. Both of these comments were received with much mirth. He also was concerned about those who had not been potty trained and asked for a showing of hands of those who did not know how to operate a commode! This too was received with much hilarity.

We were then turned out into the hot, humid Montgomery afternoon to play softball, volleyball, basketball, and football. For those who sought the cool rooms on the inside, there was ping-pong, air hockey, foosball, and just general hanging out. The concession stand is again being manned by the famous Blaylock family from Sulligent, Alabama. With her usual demeanor, Sister Blaylock has proved herself to be one of the most famous and active talkers from the north end of the state. Very few women can hold a candle to Donna Blaylock when it comes to talking, fabricating, sarcasm, and everything in between! She can sell pickles, eat a Subway sandwich, and harass me every single time I even venture into the concession stand area.

A bunch of the Dothan girls showed up for choir practice and my battery died to my camera and so I have no pictures of any of this although I do have some from the night service. They were well into the songs (as you can see, although you will have to pardon the red-eye effect that I could not correct with my digital camera).

After a time of song and worship, Brother Sammy Sherrill, our district Youth President, introduced Brother Harold Linder (from parts unknown to me at this time) who had to quickly fill in from Aaron Soto who could not attend due to some very extenuating circumstances in his church. Brother Linder preached a very short sermon (alas I do not want our kids getting too used to this) about the power of God-given desire in your life. He used examples like Joseph, the Hebrew kids in the fiery furnace, Esther, and a few others to get his point across. The altar service followed and a number of kids spent some time praying.

Following the service was the infamous “Midnight Madness.” I stayed for about 7 minutes and 28 ½ seconds and couldn’t handle it any longer. I left the restless savages in the hands of the Youth committee and staff and went somewhere to keep my nerves from getting more jangling than what they could handle. Very fortuitously or maybe even directed by God, I ran into my good friend and Vincent, Alabama pastor, Perry Wells. We rambled around to the backside of the old campground and snuck in the back door of the kitchen. Lo and beheld we thought God had sent ravens to save us but found out later it was Sister Oma Overton. She put up the leftover chicken fingers, a few buns, sliced tomatoes, and left them lying about for a few hungry prophets, umm, preachers to come and enjoy. We had cold chicken samiches and Coke and spent considerable time fixing all the problems of the world. Be on the lookout, things are going to get better here in a few days from all the changes we will endeavor to make.

When the kids got in from Midnight Madness, I picked up a tradition that I started a few years ago. I read aloud to the boys in the dorm to try and wind things down so that they will go on to sleep. I pulled out my trusty Bantam paperback and struck out on the trail with Nolan Sackett who was the central character in “Mustang Man.” I read about 18 pages in 20 minutes or so but should have read for about another ten because they were still a little wound up when I cut the lights out. Typical boy stuff goings on that has been around camps for years. Stuff like coughing, giggling, whispering, passing gas, fake ailments of every sort, and some were “texting” somebody in the way off cellular world. I think I shall invite my friend from Vincent, Alabama in here tomorrow night to see if he can add some of the phones to his collection!

When I shut the lights down, Justin called me to tell the Celtics had trashed the Lakers and won the finals by a score of 131-92. Brought back some sweet memories of my high school days when Larry Bird, Dennis Johnson, Robert Parish, and Coach K. C. Jones were wearing out the likes of Magic Johnson, Kareem Abdul-Jabbar, and James Worthy of the Lakers.