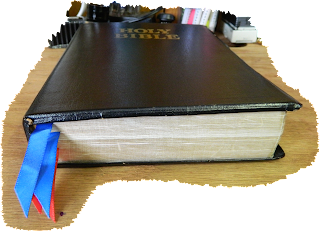 The third study Bible that we come to has a great sentimental value to me.  It is the Dugan Topical Reference Bible from Dugan Publishers out of Tennessee although I believe they are no longer in business.  I purchased this Study Bible on September 15, 1989 from Rev. Kelsey Griffin who was teaching my Bible Study Methods class my freshman year at Texas Bible College when it was still located in Houston.  He had boxes of these Bibles that he kept in his upstairs study/library and he sold them to the students for $20.  If I had known then what I know now I would have bought as many as I could afford at the time.  What is unique about this Bible is that it came at a time when computers were just starting to come on the scene but the vast majority of people did not have $2000-3000 to spend on one.  So most of the resources that ministers had available to them had to be in printed form of books.  Also at that time there was very few study Bibles around.  Most Pentecostal ministers used a Thompson Chain Reference Bible, a Schofield Study Bible, or a Dake’s Annotated Bible.  Occasionally you might find someone who had a Ryrie Study Bible but they were not very many who had those at the time.  There were a couple of features about the Dugan Bible that Brother Griffin brought to our attention.

The first one was the incredible analysis of the Bible.  It was literally the entire Bible arranged in subjects.  You navigated about this Bible by reading the passage and then looking at the number in the center column.  The number that was there correlated to a page number in the back of the Bible and when you would turn to that page there were massive amounts of Scripture that had been arranged according to the subject.  A diligent student would be able to take these Scriptures and arrange them in a topical manner and often a sermon or a Bible study would practically write itself as you studied.  This was especially helpful for the assignments that Brother Griffin developed for us.  (I have written about Brother Griffin several times on this blog.)  For every class that Brother Griffin taught us, he would require an assignment to be turned in through a slot in his office door every Monday morning before 8 o’clock.  I did not realize it at the time but he was actually developing a discipline for the students to get into the habit of sermon preparation.  It was at that time that I did not realize that he was preparing me to take a serious approach toward preaching the Word.  The Subject Analysis in the Dugan Bible was a fantastic tool for a beginner and for that matter it is still a very effective tool for someone who has been preaching for years.  The Subjects covered in the Dugan Bible are: 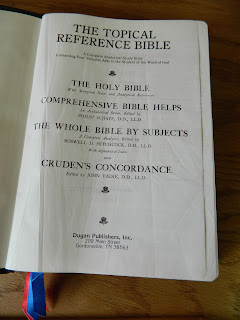 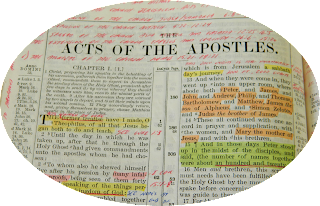 Under each of these headings there were multiple chapters that were created.  It takes a little over 700 pages of content in the back of the Bible.  It also has a very thorough index of all the subjects at the end of the Bible.  This is another helpful tool that can be effectively used to understand the Bible.

Another very compelling addition to this Bible that Brother Griffin used as a strong recommendation for the Bible was the inclusion of a Cruden’s Complete Concordance in the back.  This is a very helpful concordance for a Bible student and a young preacher who is just getting his feet wet.  I used this Bible extensively for a number of years before I sort of retired it simply for the sake of preservation.   I found the concordance to be especially helpful when I was listening to someone teach or preach.  Obviously that aspect has changed drastically with all of the electronic devices that contain the Bible at present but in those days a printed Bible like this one was very much worth whatever you would pay for it. 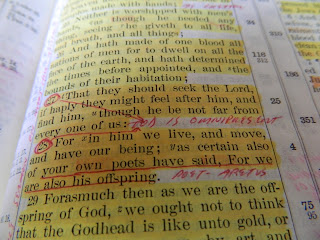 In the back of this Bible are around 20 pages of blank paper that I worked at writing notes in.  Brother Griffin carried around a Cambridge Wide-Margin Bible that he had meticulously written notes in the margins.  It would be sometime later before I would get a wide-margin Bible so I used the Dugan Bible to write down notes of my own personal studies, Bible college notes, and any other material that I thought would be of help to me.  Although the pages are very thin, if you wrote carefully with a ball-point pen, there would not be any ghosting of the ink on the pages.  This is one of the reasons that this Bible has a sentimental value to me is because it is working on thirty-years having passed by since I started writing and using this study Bible.

There are no maps, no book outlines, and no marginal notes at all in this Bible.  If you are looking for those in this Bible, you will be disappointed but the Dugan Bible has a copyright date of 1985 and it would be comparable to what you would find in other Bibles that were printed about the same time.   However, all-in-all if you ran across one in a used bookstore or an online auction, I would encourage you to purchase one because it is a tie to the past and can help you appreciate the resources you have now but also it can give you an insight as to how preachers in a by-gone generation had to develop their material to preach.

Thanks for your comments that most are being published and thanks for your e-mails. . . To the anonymous poster on the ESV Study Bible blog, I am thinking about taking your question and turning it into its own article.  Be on the lookout for it in December.

Unknown said…
The Thompson Chain is a sentimental favorite of mine because that was the first Study Bible I bought after my New Birth Experience. The Dugan, however, is probably my favorite Study Bible for study purposes. It saved me on several occasions while serving as Youth Pastor in Orange, Texas. Following Sunday School (where I taught the youth) we had a worship service in the sanctuary. The pastor then, W. E. Gamblin, would turn to me once sat down on the platform and inform me at that moment that I was preaching the morning service. Since I had nothing prepared, I would immediately and simultaneously start praying and reading in the back (Analysis of the Bible) until something struck me in my spirit. I would take a text and use the analysis as my outline. While my preaching may not have been very good, it was absolutely Scripturally based!
11:42 AM

Jrchezz said…
Hello, if possible would you please post the ISBN for that Bible. I'm seeking to purchase that Bible as a gift to my Dad

The Dugan is no longer in print but has been published under a variety of different names and companies. Below is a link that might be of assistance to you.