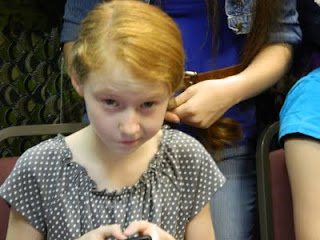 We have had an awesome trip for the North American Youth Congress 2011 in Columbus, Ohio. The praise and worship, preaching, split teaching sessions, and connecting with people has been very enriching. However we are at sixteen hours and counting before we leave Columbus and head back to Dothan. Gracie’s picture sort of sums up how a lot of us feel right now. Half-comatose, worn-out, carb-overloaded, and sleep-deprived although as one of the old black saints once said, “My feets is tired but my soul is at rest!”

One thing that really stands out to me is how that technology is changing a lot of what we do. I have to confess that I have spent some time texting during the sessions primarily zipping messages to Twitter (@barnabas14 if you want to follow me). Also, the GYD has used technology in a couple of unique ways. For the talent contest, you are instructed to text your choice of singer to a certain number. Then last night, there were instructions of how to text an offering to the GYD to help defray the cost of the event. Many of the guys who have preached have used Ipads for their notes and the quarterbacks for the worship team have also used their Ipads for music lists (I think). Since I am not a musician, I am unsure of what they can do with Ipads. 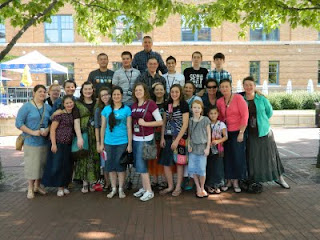 This morning I missed the Jumpstart session because Stephen Williams wanted me to UPS him a DVD of last night’s message by Jimmy Toney, A Generation of Giants. For the Dothan bunch who are not aware of it, Stephen Williams and Jimmy Toney have been pretty connected at the hip for the last several years. So on the way to the media booth, I ran into Jimmy Toney and have tentatively scheduled an Accent Weekend in Dothan sometime in January. When I get home, we will nail down the dates and see when we can accommodate him. When I told those here who attended NAYC, they all were very excited about it.

After securing the DVD, I knew that the Jumpstart session was just about over and so I headed to the convention center for the young ministers session. It is probably a half-mile to three-quarters a mile walk from the Arena. Nathan, Jeremy, Stephen, and Chad caught up with me on the way. When we walked in the room, General Superintendent David Bernard was up on the front row awaiting the start of the session, so I took our guys up and introduced him to them. A memory-making moment for all of those guys, I am sure.

Brother Bernard addressed the room full of young ministers. I would guess that somewhere in the neighborhood of 2500-3000 were there. He started by saying that everyone needs to find a place to serve. As a general rule when you don’t know what to do just do what you know to do.

That involves personal spiritual disciplines, such as: 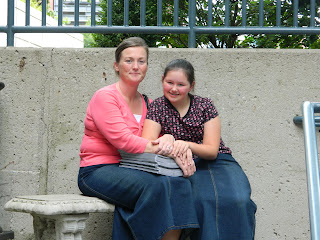 Everyone who is called may not necessarily feel a call to a pulpit ministry but there are avenues that all can follow in the Kingdom of God. He also encouraged that a five year goal be set up in your life. You might consider a career that will help support you when you get involved in ministry. I personally believe that all who are in the role of ministry need to be able to build a “tent.” I get this from the fact that Paul was a tentmaker who could financially support himself during his missionary journeys.

Brother Bernard addressed the importance of a continued emphasis on doctrine, lifestyle, and evangelism despite the rapid changes that are taking place in our society. We cannot trade any of these things just for the sake of being relevant.

After that session was concluded we headed back across to the Nationwide Arena. On my way, a friend of mine, Myron Powell, who pastors in Omaha, Nebraska sent me a text and I have to admit that I skipped the general session because I was doing a little “hall” ministry. For about thirty minutes or so we had a great time of fellowship. Toward the end of the conversation, his wife came up and he introduced me to her. They are good folks who are representative of a lot of good faithful people who make up the fabric of the UPCI.

I would definitely be remiss if I did not tell you about Bucca's Italian Restaurant located in the Arena district. In 2006, Rhonda Lewis, Tina Caskey, and Regina Worley (aka "The Cooper Girls") sort of stumbled into this place accidentally. It has out of this world Italian food and when you walk in, one of the things they do is parade you through the kitchen on the way to your table. There was 32 of us today and the service was awesome, the food incredible, and the camaraderie fantastic. Go to the photos to see our experience. 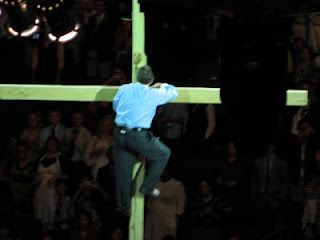 One final thought. . . Most of us who have any inclination of direction have understood the UPCI has been challenged doctrinally by a number of men who fit into the role of those who crept in unawares mentioned by Jude. Some of the cardinal elements of separation from the world have also been mocked and sneered at by those who just a few years ago were preaching our camp-meetings, conferences, and regional meetings around the country. They were some of our so-called “top guns.” I have thought about some of those guys in the last couple of days and it is obvious to me that their influence wasn’t nearly as deep as they perceived.

There were a number of pastors, evangelists, and various ministers who had become quite frustrated by this sort of thing and in 2007 was sort of a watershed moment for us as a movement. We lost some good men in a deadly cross-fire of sorts. However, the pruning process also pulled away some dead branches and from my view this week, we are trending back in the right direction. While we will never have a day again when all seem to be doing the same thing, it is increasingly obvious that at least the direction has begun to turn back around. I salute all of the good, godly men who hunkered down in the trenches, and gave themselves to prayer, fasting, and ministry of the Word because it is paying off!

Six years ago, Mountain Dew was splattered all over the stage here in Columbus at NAYC, last night Jimmy Toney re-oriented us and a Cross replaced that little “relevant” trick. Don’t ever forget that there is power in the Word! I salute the General Youth Division: Shay Mann (President), Michael Ensey (Secretary), and Matt Johnson (Promo Director) for the outstanding job that they and their staff have done. They have a great hand in what is happening with the good shift in the UPCI.

Thanks for reading my NAYC ramblings. . . Headed to Dothan in the morning to see my little wife, Teresa.

By the way, the Pentecostals of Dothan should get ready for a fired-up bunch of young men and women Sunday!

Pastor D. D. White said…
Gotta love it... SO glad that we're heading back in the right direction!
1:53 AM

Tim Hadden said…
Very refreshing to see a very balanced approach to an at times very volatile subject. You are dead on and continue to present the truth in a very balanced perspective. Appreciate you rev.!
7:38 AM