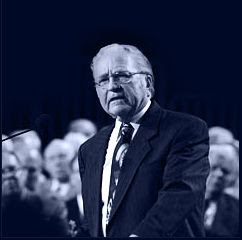 When I was at Texas Bible College (1989-1992), J. R. Ensey was the president of the school. It just so happened that some years prior to this, he had been the promotions director for the Home Missions Department when Brother J. T. Pugh was the Home Missions director. During that time, their close proximity working together had built a friendship between the two.

Brother Ensey was telling us one day in class that every Monday about mid-morning that he would go to Brother Pugh’s office and they would swap tales from their weekend preaching engagements. For those readers who come by and aren’t Pentecostal, an explanation might be in order leading up to this tale.

For whatever reason, Pentecostal churches over the years have always had the ability to attract some of the world’s first-class fruitcakes (as in people, not the brick-like dessert). I can remember as a kid some of the loony tunes who came through our church and I always held my breath, fearful of what antics they might get involved with before the service ended. In fact when I was in Houston going to school, one of the instructors, Ken Gurley, gave us a good piece of advice. He told us not to run off the village idiot (and every church had one) but to keep them around because if we ran them off they would be replaced with seven who were worse than they were. This provoked great mirth from our class. However as the years have flown by I have just about come to the same conclusion that Brother Gurley had.

So on this Monday morning, Brother Ensey came in and sat down and Brother Pugh, who was an incredible story-teller, began his tale. He had been invited to preach for Brother John Cupit who pastored a great church in New Orleans. Brother Pugh preached and gave the altar call. When he did, most of the church responded. A rather large crowd gathered in the altar area and before long, one of the village misfits began their harangue. Whatever this woman was doing it was complicated by some shaking activity and before long Pastor Cupit felt it wise to call her down. So he told her to stop shaking to which nothing happened, she kept on shaking; this continued on about five times or so until finally Pastor Cupit, with a great booming voice said, “I said stop that confounded shaking!”

As Brother Pugh was telling this story, each time he repeated what Pastor Cupit had said, he notched his voice up a bit. What Brother Ensey was not aware of was that with the HM Director’s office door open, a small group of people had been collecting out in the hall and were creeping up every time Brother Pugh would repeat the words to stop shaking. On that last, long, loud call with Brother Pugh almost shouting, “I said stop that confounded shaking!” there were five or six people with their heads stuck through the door all looking at Brother Ensey, who was sitting in his chair, back to the door, totally unaware of the gathering crowd. So engrossed in the story that Brother Pugh was telling, he had forgotten the open door.

When one of the people who was looking in the door asked, ‘Brother Pugh, is everything alright?’; Brother Ensey told us he looked around saw the crowd and then heard Brother Pugh say to them, “He’s OK now.” We all howled at this story. As time has passed, I periodically remember that tale and think of how hilarious that it must have been on that Monday morning at WEC when Brother Pugh was Home Missions Director.

Brother Ensey told us another story about a hospital visit that Brother Pugh made one day with General Superintendent Stanley Chambers. In addition to Brother Chambers there was another WEC official with him. Brother Pugh took off about four or five steps in front of these men and headed down the hall at a quick clip right behind him because they assumed he knew where to go. After a few turns, Brother Pugh walks up to a door, opens it, and holds out his arm leading Brother Chambers and his neighbor in the door. Both step in and Brother Pugh closes the door and heads off down the hall. He stops at the nurses’ station and then turns around and watches the door that he has just led these men into. In about 30 seconds or so, Brother Chambers and his cohort both step out and began looking around trying to get their bearings. . . . Brother Pugh had opened the door to a large janitor’s closet and they had both walked in. Again, we all howled at the antics of Brother Pugh.

Obviously, while he was a very serious man, it was also evident that he had a great sense of humor. . . .

What a bittersweet experience this has been remembering Brother Pugh but there is another chapter in his life. From the website of the church in Odessa comes the following announcement:

UPDATE: Bessie Pugh, wife of Bishop J.T. Pugh, passed away in her home at about 11:30PM on Wednesday March 24, 2010. Preliminary funeral arrangements are set for a double funeral service as initially scheduled for Friday, March 26, 2010.