The Neurosurgeon, Richard Dawkins, and Me

A little over a month ago, my dad ended up needing a five vessel bypass via open heart surgery. Throughout the process, I spent a lot of time at the hospital that I have worked in off and on since 1985. I occasionally still work in the Radiology department and in some of the intensive care units but have not been full-time since January 2006. I discovered once again some of the advantages of being an insider when a family member is in need of health care although that may change after Obama has committed his “bailout.” My dad is now doing well and overall did remarkable throughout the affair.

On one of the days that I was spending with him, I left the hospital for a bit and returned after lunch. As I was getting into the elevator, I ran into a physician that I have known since the summer of ’92 or so. He is a kind-hearted soul and has always been very genial and I have never personally observed him demonstrate the messiah complex that most neurosurgeons seem to get equipped with when they are in medical school. Now before you send me a derogatory e-mail for being judgmental at least give me the consideration of allowing you to know that my point of reference is not just the two hospitals here in Dothan but St. Luke’s Episcopal/Texas Heart Institute and M. D. Anderson in Houston both of which were crawling with neurosurgeon’s. Generally neurosurgeon’s egos need a lot of room as in wide doors and tall ceilings to accommodate their antics. I would be wrong if I did not also add that I have noted some preachers who came into my airspace a time or two that would rival any neurosurgeons ego hands down. Funny what perceived self-importance does to us.

Anyway, he struck up a conversation with me and wanted to know what was going on with my dad. He then spied a book I was holding and asked me what it was. Just so happens that I had been in a used bookstore and ran across a copy of Richard Dortch’s two books, Integrity and Secrets of the Heart. I had picked them up and re-read the account of Jim Bakker’s fall from grace with the PTL scam back in the late ‘80’s and it is still a little mind-boggling to read of the amounts of money that flows among the televangelists and how largely these folks were living. Dr. Becker had never heard of Dortch, which not many people outside of the religious world have, so I was not necessarily surprised. Then he asked me what PTL was and I told him it was “Praise the Lord” or “People That Love” whatever they chose to call it on that particular day during the broadcast. 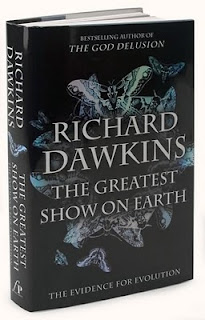 With this he asked me, “Philip, do you read very much?” to which I replied, “Ahh, I usually read a couple of books a year.” Probably a huge understatement but one needs to be modest so I happened to be in the manner mode that day and flew under the radar with that answer. It was then that he told me that he had a book recommendation by one Richard Dawkins entitled The Greatest Show on the Earth. I have to confess that I had never even heard of Richard Dawkins but I told him that I would indeed see about it. So I wrote the author’s name down and determined that I would see about it because I am always in the hunt for new author’s and books. The reality of the fact is that I was in for an awakening.

Two days later after my dad had sufficiently recovered from his heart cath, I took off to Barnes and Noble for a little while to get out of the hospital. When I got there I was in for a big surprise! I hunted down Dawkins book and found out that he is one of the rising proponents of evolution and a big chief among what is being referred to as the New Atheists. He is somewhat of a free-thinker although very articulate in being able to explain some of his points.

As I read through The Greatest Show on the Earth, I remembered something about kind-hearted, soft-spoken, old fellow that I had forgotten—he is an atheist. Not a rabble-rousing, saber-rattling, street-marching type but one who on numerous occasions has documented in his progress notes that he would tell families that he was an atheist and if that was problematic for them, he would get another neurosurgeon for them to see. As a sidebar, I have sometimes asked good Christian folks if they would rather have an incompetent Christian surgeon or a vile-sinner but extremely competent surgeon. Just in case you are wondering about me, give me the vile-sinner but competent guy every day over the incompetent brother. Just because someone is saved doesn’t necessarily make them competent (insert your own smiley here).

As I read through Dawkins’ book, it came back to me that when I told the neurosurgeon about the Dortch/Bakker/PTL connection that he was attempting to subvert my thinking by recommending The Greatest Show etc. Indeed the book was provoking but the problem (or advantage) is that I have not been one of those “Christians” who just checked their brains in at the backdoor when I showed up to hear someone preach/teach or for that matter lecture in a college classroom. Everything goes through a filter and over the next few posts, I shall try to accommodate you with some of the things that come out of that very, very beneficial foray into Richard Dawkins’ world. For you see Mars Hill (Acts 17:16-34) is still alive and well at this juncture in history and whether or not you are facing the philosophers on Mars Hill or the modern day Nimrods who are building their towers of Babel, there are solid answers for the loose threads they are attempting to unravel on the fringes.

Harry Blamire wrote The Christian Mind in 1963 and some of his words were very blunt but bracing as Os Guinness quotes in Fit Bodies, Fat Minds (subtitled: Why Evangelicals Don’t Think and What To Do About It): “We speak of ‘the modern mind’ and of ‘the scientific mind,’ using that word mind of a collectively accepted set of notions and attitudes. On the pattern of such usage I have posited a Christian Mind, chiefly for the purpose of showing it does not exist.” Blamire continued “There is no longer a Christian Mind. . . The Christian Mind has succumbed to the secular drift with a degree of weakness unmatched in Christian History.”

I would be foolish to propose a cold, clinical intellectual approach to theology because this can be deadening to one’s spiritual life. On the other hand, if somebody (or” somebodies”) does not get a grip on their Bibles and begin to love God with their mind (Matthew 22:37; Mark 12:30; Luke 10:27; Acts 17:11; Romans 7:25; etc.) many are going to be swept away by the prevailing and shifting winds of doctrine flowing in our times. This shores up my encouragement for expository preaching which I did a series sometime back on the Barnabas Blog.

Since I have become acutely aware of the competition I have with twitter and Facebook, I am attempting valiantly not to be as verbose so I will pick up the Dawkins exercise in tomorrow’s post.

Keep writing - I want to keep reading and not the frothy stuff!

You left me wanting more.

Better not let me down tomorrow.
5:14 PM

I am thankful that your dad is doing better. His continued recovery is our hope and our prayer. Now, your posting has provoked much thought, as well, I have to go to Barnes and Noble today. Oh well, at least it is raining and not snowing.